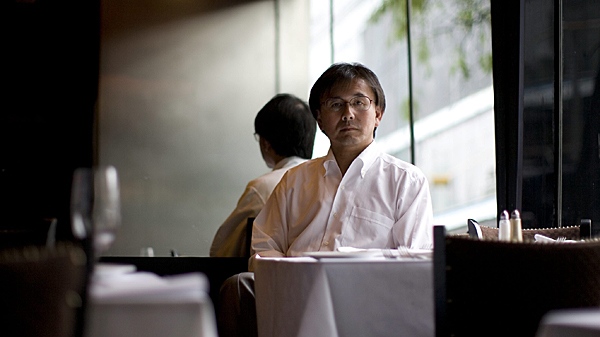 Fred Luk, owner of the restaurant "Fred's Not Here" sits at one of the tables at his Toronto eatery on Tuesday June 22, 2010. (THE CANADIAN PRESS/Chris Young)

TORONTO - It's hard to imagine Toronto's glitzy entertainment district as a ghost town, but that's the eerie image painted by a Pittsburgh cafe owner who saw his city's downtown core shut down during its turn as host of the G20 summit last year.

"Four days we lost. Wednesday, Thursday, Friday and again on Monday people didn't come ... It was awful. I don't wish it on anybody," says Ali Naderi who owns the Keystone Cafe, about two blocks outside the security perimeter erected in Pittsburgh last September.

As leaders of the world's most powerful countries prepare to meet in Ontario's Muskoka resort region and in Toronto this weekend, the elaborate security measures and protests are expected to bring traffic to a crawl in selected areas and squeeze business.

"If the G20 comes into your area, I wish you good luck because all the small businesses, they are going to be really hurt," Naderi advises in a phone interview from his cafe.

"Some restaurants were open, but nobody was in them. Our business is built on the people working in the downtown ... the problem was nobody was working in town to come to us," he adds.

Office buildings in downtown Toronto have asked employees to work from home or take vacation while the summit is on. And many of the city's most prominent tourist attractions--the CN Tower, Rogers Centre, Mirvish theatres and the Art Gallery of Ontario-- are shutting down for the weekend.

Some 1,800 businesses in Toronto's entertainment district are located in and around a security gate that stretches for blocks around the Convention Centre, the site of the G20 summit, which runs Saturday and Sunday.

Area business owners are concerned about lost revenues from vacated corporate offices and condos, and from a lack of tourists and theatre goers, says Janice Solomon, executive director of the Toronto Entertainment District Business Improvement Area.

"When you have the Blue Jays go out of town and you have two major theatres close, all of that has a domino effect," she says.

Some of the restaurants that line King St. W, along with the Second City comedy club, are offering special promotions to tell an estimated 100,000 locals and an expected 30,000 visitors it's "business as usual" in the area.

Fred Luk, owner of Fred's Not Here and Red Tomato, is one of the area's restaurateurs offering 15 a per cent discount to diners who produce a receipt proving they've shopped at a local store.

But Luk has no idea whether summit visitors will venture out of their hotels to restaurants outside the security zone.

He's preparing for a 50 per cent drop in revenues. In 1988, when the G7 Summit came to Toronto, he recalls a 20 per cent decrease in sales.

Both his restaurants will be operating out of a single kitchen for the first time in many years, Luk says. Staff will be reduced.

"Hourly wage employees will suffer ... it's not big business, big business can afford to shut down, small businesses cannot."

Luk says he doesn't qualify for compensation that the federal government says it will give to businesses who can prove a loss of revenues due to "extraordinary security measures" because he is just outside the fence.

"I have no problem having a G20 in Toronto because I think that if any city is qualified to host G20, it would be Toronto," he says. "But I don't think Mr. Harper calculated the financial stress that it puts small business people in."

The Canadian Restaurant and Foodservice Association said its Toronto members are bracing for a huge drop in sales during what is traditionally their busiest time of the year.

"I think it's a gain for those members that are in the hotel business and one or two venues that are hosting events, but overall it will be a loss," he says.

The restaurant group is calling on the federal government to ditch the onerous criteria to prove losses resulted directly from security measures.

Naderi says he lost about $5,000 in revenue the week of the Pittsburgh summit in 2009 but never had the opportunity to apply for compensation.

It's the biggest loss in business at Keystone Cafe in its 30 years, Naderi said, adding that he anticipated the opposite effect from the summit.

"We were so excited, I marked it on my calendar: 'I want nobody to be off, everybody has to work on that day.' I asked everybody to work extra hours, I had a plan to work 16 hour days."

Naderi says he's grateful that security in the area was tight and kept vandals who smashed restaurant windows in other areas of the city away from his cafe, but adds that it also deterred customers.

"Security was good, they didn't let (the protesters) move. And what happened, because they couldn't move, nobody came to downtown and guess what? We lost four days business."

But, Andrew Weir, vice-president of communications at Tourism Toronto, is optimistic that the 114,000 hotel room nights booked during the summit will amount to an estimated $53 million in spending.

Small businesses outside the security zone, including boutiques selling "protest wear," the infamous Zanzibar strip club and individuals renting out their downtown condos believe they can capitalize on the G20 buzz.

"I think a lot of businesses are going to gain from the summit," Weir says.

"But it shouldn't be lost on us that there are going to be some that are going to find themselves in a tight position just because of geography," he adds.

Tourism Toronto has set up booths to greet international guests arriving at Pearson Airport--presenting information packages on everything from late night restaurants to the best spots to watch the World Cup.

A visit with Weir's Pittsburgh counterpart was among his top priorities after Toronto learned it would host the summit.

Craig Davis, vice-president of marketing at VisitPittsburgh, says one of the most important lessons for Toronto is to understand that once the G20 starts, security officials are in complete control.

"The downtown businesses were told that you can remain open, there will be free passage. But the reality was, that wasn't the case," says Davis, a former Toronto resident. "It wasn't practically possible for that to happen."

"They constructed a fence right around Pittsburgh and you had to have the right credentials to get in... there was really no chance of somebody from the outside coming in," he said.

"As a result, a lot of the downtown businesses, most sandwich shops and that kind of thing, that thought that they might make some money during the G20, some of them suffered."

But Davis says the city benefited in the long run. Pittsburgh generated more that $100 million in public relations and the city has since been awarded five big conferences, as a result of publicity from the G20.