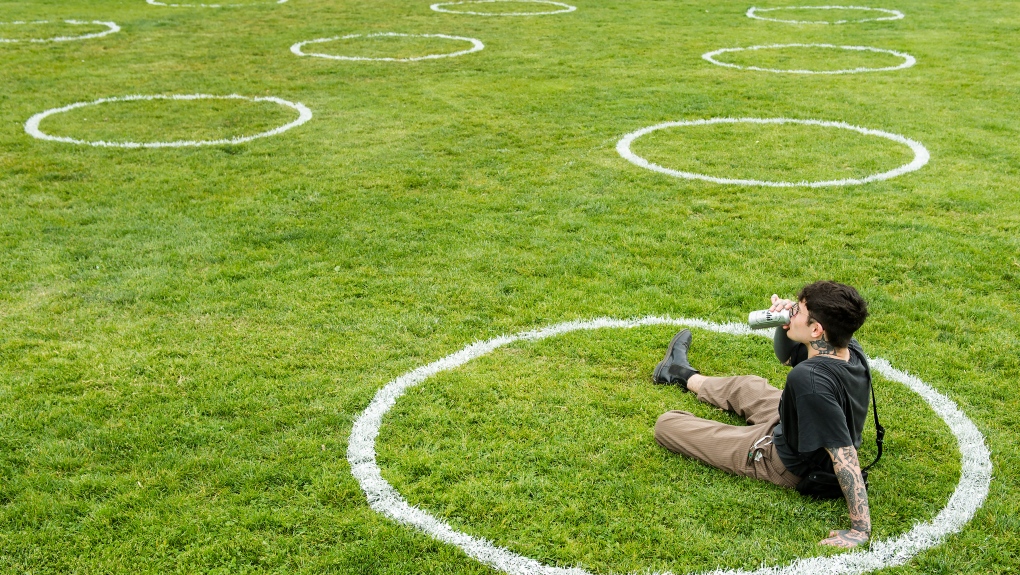 A person sips a beer while sitting in environmentally friendly physical distancing circles at Trinity Bellwoods Park during the COVID-19 pandemic in Toronto on Thursday, May 28, 2020. THE CANADIAN PRESS/Nathan Denette

TORONTO -- Physical distancing circles are returning to a popular Toronto park this spring in an effort to get people to keep their distance amid the third wave of the pandemic.

Starting next week, Toronto will once again paint circles on the grass at Trinity Bellwoods Park, located in the city’s west end.

The circles were first installed at the roughly 85 acre-park during the first wave of the pandemic last year after one hot weekend in May when thousands of people gathered there, with many not wearing masks or keeping two metres apart.

The province is currently under a stay-at-home order until at least May 20 but city officials say the circles will help provide essential outdoor space to residents.

“While there is currently a province-wide Stay-at-Home order in effect, the City recognizes that many residents living in apartment buildings and condominiums who do not have yards need spaces to get exercise and fresh air in City parks,” a press release read.

Under the order, people should only gather outdoors with members of their household, and single people can join one other household.

The circles should be completed next week depending on weather conditions. The paint requires dry, sunny weather to be applied properly.

Last year, the circles had a diameter of eight feet and were placed 10 feet apart- big enough for two people to lie down or three people to sit cross-legged.

The cost of painting each circle was roughly $12.