TORONTO -- Video and photos have emerged on social media of a popular Toronto island beach packed with party-goers this past weekend despite calls from health officials urging people to keep physical distance even when outdoors.

The photos and video posted onto Twitter show what appears to be hundreds of people on Hanlan's Point Beach not wearing masks and not keeping physical distance.

“We had quite a discussion about [this issue] at our sort of emergency command table,” Mayor John Tory told reporters at a news conference on Monday. “We are on top of it. We are going to use the marine unit and other resources at our disposal to better address some of these crowd scenes on the beaches.”

It’s not the first time that beaches in Toronto, and across the province, have been packed with people not physical distancing. Ontario Premier Doug Ford previously warned young people to stop partying in order to avoid spikes in cases.

Recently, there has been a steady increase in the proportion of new cases involving younger people between the ages of 20 and 39 ever since the Ontario governments began to slowly reopen the province.

Mayor Tory said on Monday that the city is continuing with its educational approach to dealing with the issue. He said bylaw officers, as well as city and park officials are trying to educate people on these beaches on health protocols.

“If we find that we are not getting the kind of cooperation from this educational approach then more tickets I’m sure will be issued by the enforcement authorities,” Tory said.

“We will [also] take other steps as needed to make sure these types of crowd scenes are not reported over and over again.”

The mayor said he was also adamant about not closing down beaches despite the overcrowding issues.

“To me, to close down any of these beaches is an admission of defeat and it’s an admission that we are going to let the behaviour of a few who don’t consider these rules to be important … interfere with the enjoyment of the many who are trying to enjoy the summer as best they can,” Tory said.

"At the moment, what we want to do is try to really educate people … I guess we just want to say to people what we have been saying all along, which is that you should avoid crowd scenes [and to] avoid scenes where it’s almost impossible to physically distance yourself.”

“I can assure you we assess this every day,” Tory said. “I don’t want to announce the closure of beaches or a heavy hand but as we watch the situation, we’ve seen I think fairly good cooperation over the last few weeks.”

Dr. Eileen de Villa, Toronto's medical officer of health, told reporters on Monday that people need to remember to keep physical distance not only when indoors.

“Certainly outdoor spaces are safer but we cannot say that they are completely safe,” she said. “That’s why we continue to remind people that it is important to watch your distance.”

‘Back To Normal Festival’ held despite warnings from health officials

On at least two Saturdays in July people have been playing music and dancing at Cherry Beach despite warnings from health officials about large gatherings.

Omari Taylor, who is one of the DJs who played at the event, shared an invitation on social media inviting people to the “Back to Normal Festival” with the words “United Non-Compliance”. 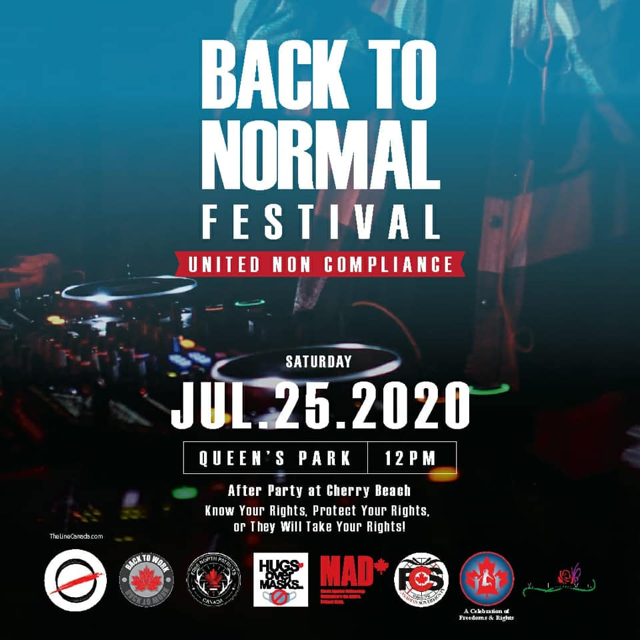 ”It’s just a celebration of life, getting together having a good time, connecting, that’s what it’s all about,” Taylor told CTV News Toronto on Monday.

Toronto police have had a presence at Cherry Beach throughout July and the city closes the parking lot by 7 p.m. on weekends to help prevent crowds and parties.

Toronto police told CTV News Toronto  that it is aware of gatherings at Cherry Beach and that it will continue to support the city’s efforts as they are the lead agency.

“Our officers will carry on attending beaches and parks to support bylaw officers and the service will continue to respond to reports of crime and disorder,” a spokesperson said.

The city said this weekend a ticket was issued at Cherry Beach for people operating an amplified speaker in a park without a permit.

In an email to CTV News Toronto, Associate Medical Officer of Health Dr. Vinita Dubey said COVID-19 is mostly spread in the city through close contact with a person infected with the virus.

“In Toronto, from July 1 to 26, 2020, 54 per cent of COVID-19 cases identified a close contact as the main reason why they became infected with this virus, and 23 per cent of individuals may have acquired the infection through community transmission,” Dubey said.

She said there is less risk for the virus to spread outdoors, rather than indoors, but COVID-19 continues to circulate in the city.

“This is why we continue to remind people to wear their mask in indoor public settings as per the city bylaw and when physical distance can't be maintained, wash their hands often and to practice physical distancing with people outside of their social circles,” Dubey said.