The Ontario Human Rights Commission (OHRC) and the Peel Regional Police Services Board have also signed the document which promotes transparency and accountability and enhances Black and other racialized and Indigenous communities’ trust in policing in the region.

The OHRC will provide human rights guidance to Peel police and its board on initiatives to identify and eliminate systemic racism in its service delivery and employment practices.

According to a press release from the OHRC, the organizations will work together to adopt “holistic and binding remedies” to address structural changes, the role of policing and community calls for de-escalation and defunding.

“To our knowledge it’s the first agreement of its kind in Canada to establish a relationship with police with respect to legally binding remedies,” OHRC Chief Commissioner Ena Chadha tells CP24.

“That means tangible, transformational action terms and conditions that the police will comply with with respect to structural change in policing.”

“What we’re doing organizationally is committing voluntarily to engage the Ontario Human Rights Commission with a roadmap for systemic change and that systemic racism exists in all systems, exists in policing, and it's a complex discussion,” Duraiappah tells CP24.

“We are committed to it and part of that demonstration is that if I don’t deliver over the next, you know the roadmap in the years ahead to actually achieve this, it has a legally binding piece which the human rights commission can impose on us,” he says.

Peel police, its board and the OHRC are also committing to “robust engagement with Black, other racialized and Indigenous communities” before finalizing the legally binding agreement.

“...The community and the public have really called for change and a lot of leaders have done a lot of listening this year, we’ve done much ourselves,” Duraiappah says. “And I think to say that we’re going to make change and not do it is the gap.”

The proposed agreement will include timelines for implementation and mechanisms for accountability. It is expected to be brought before the board for approval early next year.

Chadha says she thinks the community will be “cautiously optimistic” about the agreement but anticipates that it is going to be a “successful progressive approach to policing.”

“They’re [the community] hopeful that with the machinery of the Human Rights Commission guiding the police, with the fact that we have promised comprehensive engagement with the impacted communities, that they hope that this is a moment for transformation.”

Once approved by the board, the parties will approach the Human Rights Tribunal of Ontario to request a consent order, which would require compliance with the terms of an agreed-upon settlement.

Protests to defund the police

Duraiappah acknowledged that George Floyd’s death in Minneapolis over the summer- an unarmed Black man who died in the hands of police- sparked a movement in the Greater Toronto Area and across North America to put an end to anti-Black racism.

Many protests called for defunding the police in an effort to allocate more financial resources to other community sectors, which Duraiappah says he agrees with.

“Just turning the tap off to policing funding has some real negative implications to policing safety but if you think of the spirit about what people are asking is they want to strengthen and bolster other systems so that there’s not an over reliance on us,” he says.

“And can I tell you, my people want that too. We can’t be the panacea for housing, homelessness, addiction, truancy, older adult isolation, food security.”

Protests were also held over the summer in response to fatal police involved shootings in Peel, including those of Ejaz Choudry and D’Andre Campbell. 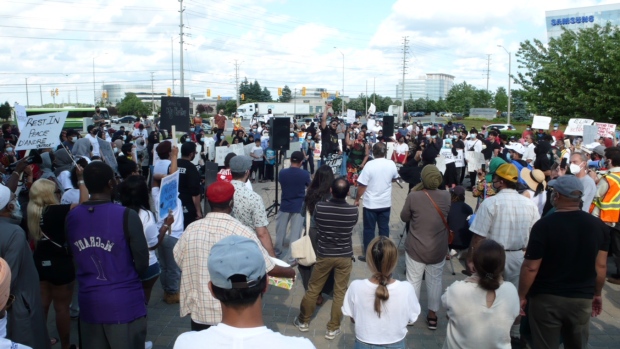 Both men were allegedly shot and killed by Peel police officers after experiencing mental health crises.

Hundreds of protesters rallied for justice for the men and called for a public inquiry into the fatal shootings.

The Special Investigations Unit, an arm’s length provincial agency that investigates whenever police are involved in a death or serious injury, is still examining both deaths.

Chantelle Krupka, a Black mother shot in the stomach by a Peel police officer this past Mother's Day, says the new agreement only provides a 'Band-Aid solution' to ending systemic racism in policing.

On May 10, Krupka was involved in an argument over text message with her former partner and father of her son about whether her son could visit her that day.

She said her former partner called the police on her and officers later arrived at her Mississauga home and demanded to speak with her outside.

After asking the officers to leave her property, the officers drew a stun gun at her and her partner as they tried to go back inside their home. While on the ground, another officer shot her in her abdomen. 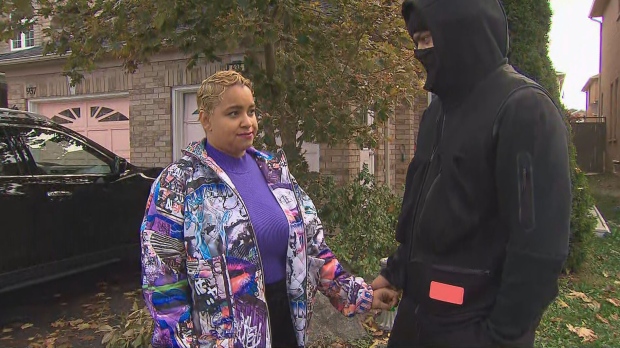 Krupka says seminars, training and more money for police officers is not the answer to solve systemic racism and unjust shootings.

"This means that they’re skirting around the real issue," Krupka tells CP24. "The families who came together, who demanded justice, demanded things, accountability in terms of identities of the officers and statements condemning the actions of the officers in these cases, you know we were ignored."

She says this is the wrong conversation to be having and that there is no "true deterrent" from racial discrimination among police officers.

"At the end of the day, these officers need to fear losing their livelihood and or their freedom in order to deter them from pulling the trigger unnecessarily. Until the chief and the powers that be accept that, we’re not going to see a difference on the front lines."