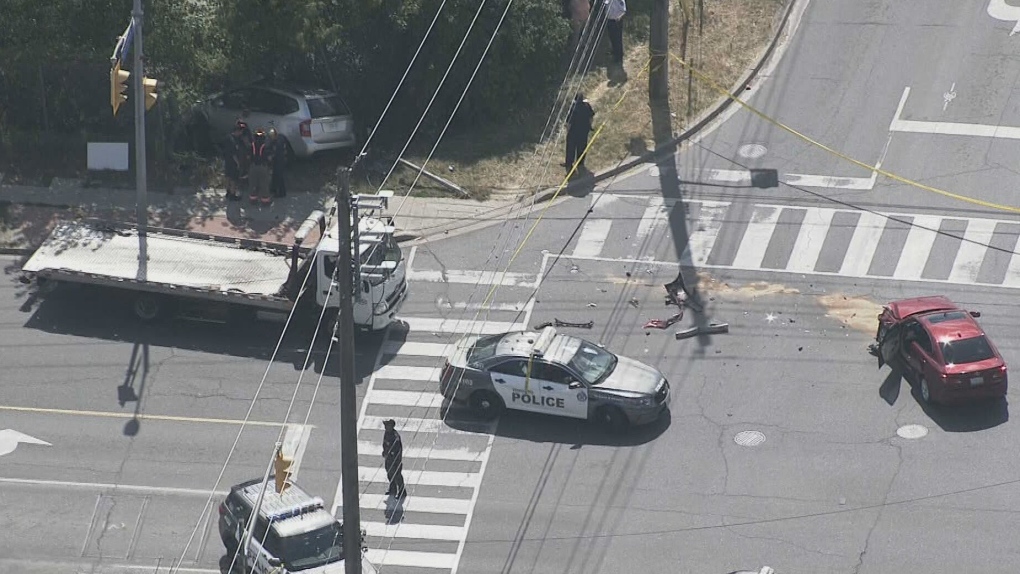 A male pedestrian has died after a two-vehicle collision in Scarborough Thursday afternoon.

Police are investigating after a male pedestrian was killed in a collision in Scarborough Thursday afternoon.

Toronto police responded to reports of a two-vehicle collision in the area of Warden Avenue and Comstock Road, at around 3:10 p.m.

Police said a 38-year-old man was standing at the southwest corner of the intersection when a 2012 red Lexus was northbound on Warden Avenue and attempting to make a left turn onto Comstock Road.

A 2009 silver Kia was also travelling southbound on Warden Avenue and entered the intersection striking the Red Lexus, police said.

The Kia then lost control and veered off the roadway hitting the pedestrian, according to police.

Initial reports said the man was possibly pinned beneath the vehicle before being rescued.

The man was transported to hospital via an emergency run but was pronounced deceased in hospital.

Police are asking anyone with information or security or dash camera footage of the incident to contact police at 416-808-1900 or Crime Stoppers anonymously at 416-222-TIPS (8477).

Democratic Sen. Raphael Warnock defeated Republican challenger Herschel Walker in a Georgia runoff election Tuesday, ensuring Democrats an outright majority in the Senate for the rest of President Joe Biden’s term and helping cap an underwhelming midterm cycle for the GOP in the last major vote of the year.

MPs are marking the 33rd anniversary of the École Polytechnique de Montreal shooting that left 14 women dead, while debate over the Liberal government’s gun control legislation — including which specific firearms should be restricted — is ongoing.