TORONTO -- A photographer on a flight to Toronto has captured incredible video showing a massive lightning storm that eventually forced a WestJet flight to divert to another airport.

Leah Good was returning to Toronto on Tuesday night after spending five weeks in Revelstoke, B.C. providing childcare for her sister-in-law who is a nurse.

Good said she captured the video, which shows several bursts of lightning, around 10:40 p.m. as her WestJet flight from Calgary descended into Toronto.

She said while there was a bit of turbulence as the Boeing 737 began its descent into the city it was surprisingly smooth as she recorded the storm.

"It was pretty crazy," Good told CTV News Toronto on Wednesday morning. "I wasn't scared but I can understand how people would be."

Good said the plane circled over the Toronto area several times, waiting for the storm to pass, but eventually the pilot said they were running low on fuel. 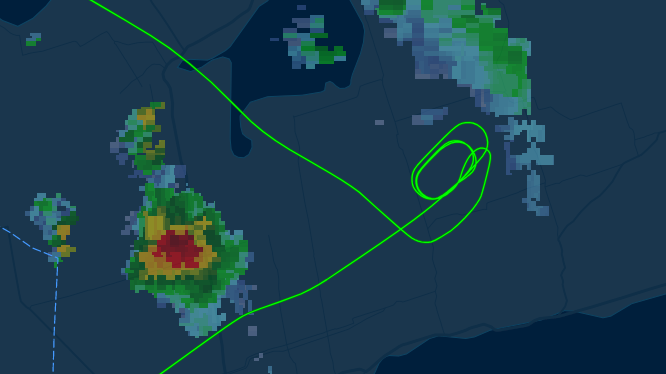 "We were circling the storm waiting for it to clear off," Good said. "But that didn’t happen in enough time so we diverted to London."

The plane landed safely in London, Ont. just after 11 p.m. before it refuelled and left again for Toronto an hour later.

"I didn't get the sense anyone was panicking," Good said. "The flight attendants weren’t freaking out either and the pilot was communicating with us."

"Yesterday, WestJet flight 672 from Calgary to Toronto diverted to London due to thunderstorms in the vicinity of Toronto Pearson," WestJet said in a statement to CTV News Toronto. "The crew elected to divert to London out of an abundance of caution and landed after a brief delay prior to safely arriving in Toronto."

WestJet said London was chosen as the alternate airport after considering weather conditions and proximity.