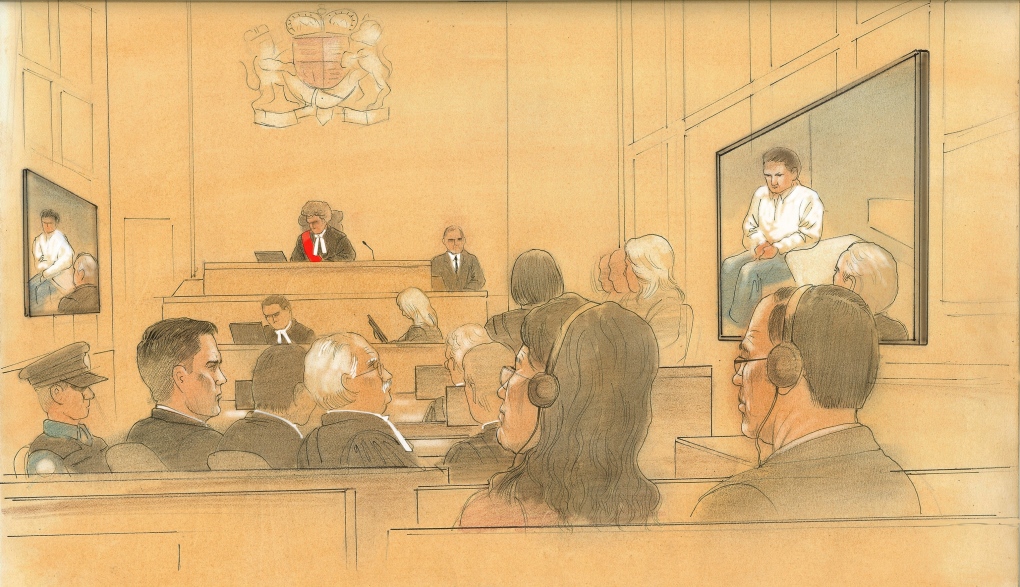 In this sketch, a courtroom hears the autopsy details of Brian Dickson's murder trial in Toronto on Wednesday, March 26, 2014. (John Mantha)

The parents of Qian Liu, the York University student from China who was murdered by a tenant in her building, say they know exactly how many days it’s been since they their only child was murdered three years ago, as they’ve wept for her every one of those days.

In a statement released Friday by the detective in charge of the case, the Liu family says Qian’s murder has damaged their family in every way.

“It has been 1,086 days since her death. We think about her every minute; day and night,” her parents Jian Hui Liu and Zheng Yaru wrote in the statement.

They haven’t been able to sleep or eat since they got the call telling them their daughter was dead, they wrote. Every weekend, they visit her gravesite, taking a two-hour bus ride to the spot where she is buried.

“This is our family reunion; our family of three including her cold gravestone. We have no words, but just keep each other company with great memories. We just stand there and think about her, as no words can explain how much our hearts hurt,” they wrote.

Qian Liu, 23, was killed during a sexual assault in April 2011. A fellow tenant in her building, Brian Dickson, was convicted this week of first-degree murder in her death and sentenced to life in prison with no chance of parole for 25 years.

Liu’s parents say they had spoken to their daughter by webcam just 10 hours before she died and her mother still logs on every night, hoping to see her face again.

“Every day her mother sits in front of the computer not moving for hours; just waiting. But she will never hear her daughter’s lovely voice again,” her parents wrote in the statement.

They remembered their daughter as “a pretty angel” who loved to tell stories, draw and play music, who brought them and everyone in their village happiness and joy.

“Liu Qian was charming, very nice and had a good heart. She was easygoing with others and trusted others,” they said.

Noting that Zheng, Qian’s mother, has not been able to work since the murder, the family says they lost their own future when their daughter died as well, as they had invested in her education and her studies in Canada, in the hope that when she returned, she would care for them.

“People who have not had this experience cannot understand. Even now when we talk about it, we cannot truly explain what we are feeling inside. From now on we didn’t just lose our lovely daughter, but we will be lonely among seniors in China. We lost our emotional and financial support in the future,” they wrote.