TORONTO -- Parents have expressed safety concerns after a man allegedly wandered around inside a Newmarket elementary school with two concealed knives last week.

York Regional Police said police were called to Stonehaven Public School on Jan. 8, shortly before 9:30 a.m., for a report of an unwanted person.

Licinio Miguelo, the senior manager of corporate communications with the York Region District School Board, told CTV News Toronto that the man pressed the buzzer at the main door and the principal went to see what he wanted.

When the door opened, he said the suspect walked past him into the school.

The board said that when the man entered the school, the principal and vice-principal immediately contacted York Regional Police and began to communicate and shadow the individual in the building.

“The individual was in the presence of both school administrators at all times and did not present a threat to students or staff. The individual left the school and was arrested by York Regional Police,” Miguelo said.

Police said they were told by school staff that the same man had come to the school office two days earlier looking to speak to a former teacher.

Pat Forbes lives near the school and said she saw police make the arrest.

“They had a hard time getting him to go down and finally they managed to subdue him. They didn’t hit him. They just laid on him, pushed him and he went down,” said Forbes.

Following an investigation into the incident, it was revealed that the man had two knives in his possession.

Parents found out about incident on social media

Shameela Shakeel, who has two children who are students at the school, said she learned about the arrest on social media before receiving an email from the school about the incident.

The letter, which was sent to parents on Jan. 8, said that someone had entered the school “without permission.”

“School staff followed all appropriate procedures. The individual was immediately approached by staff and asked to leave,” the letter read. “As a precaution, and as part of our usual process, York Regional Police were contacted to investigate.”

On Jan. 13, another letter was sent to parents with more details about the incident. The letter said that police were called when the man refused to leave school property. After police were called, the man left the building.

“It was discovered that the man was wanted on a warrant for failing to appear in court on an unrelated matter and he was placed under arrest. Further investigation revealed that the man was in possession of two knives,” the letter said.

“I would like to reassure you that we take the safety of our students and staff very seriously and that all appropriate procedures were followed. We will continue to work closely with York Regional Police and follow their best community safety advice.”

Shakeel, who is a previous member of the school council, said she’s also a point person for parents when issues arise and is disappointed she didn’t know about the incident sooner.

“We knew there was a lot more to it, because a lot of parents were calling me and texting me and saying, ‘Oh my child saw this’ or ‘My child was in a portable and I know the intruder came to the portable,’” Shakeel said.

“It’s scary. For all parents and guardians. I think we are saying, you can’t be too careful. You just don’t know.” 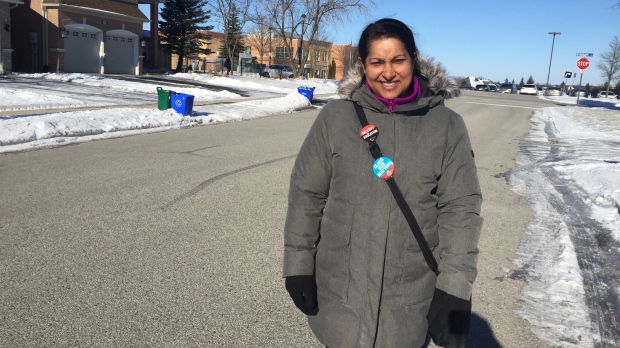 Shakeel said she took part in a meeting with the principal and vice principal after the arrest and learned that the suspect had actually tried to interact with the students.

“The fact is, he was in our school for longer than what it had said in the letter.”

Miguelo said that community members were provided with more information as soon as “the additional details came in.”

Shakeel said the big concern moving forward is the safety of kids. She is now questioning why a lockdown wasn’t called or teachers were not informed to lock their classroom doors.

“Have safety measures in place where they don’t need to use judgment calls as much,” she said. “Have things in place so that a lockdown can be called without hesitation.”

“Absolutely a lockdown should have been put in place ... that is a threatening situation and you don’t know what someone is going to do.”

Miguelo said that he appreciates the situation may be “unsettling” for parents, but that the administration took all necessary steps and precautions to ensure safety.

“As with all incidents, we will continue to review what occurred to improve our process,” he said.

Man arrested in connection with incident

A suspect identified by police as 35-year-old Mikhail Belkine, of Markham, has been charged with criminal harassment and carrying a concealed weapon in connection with the incident.