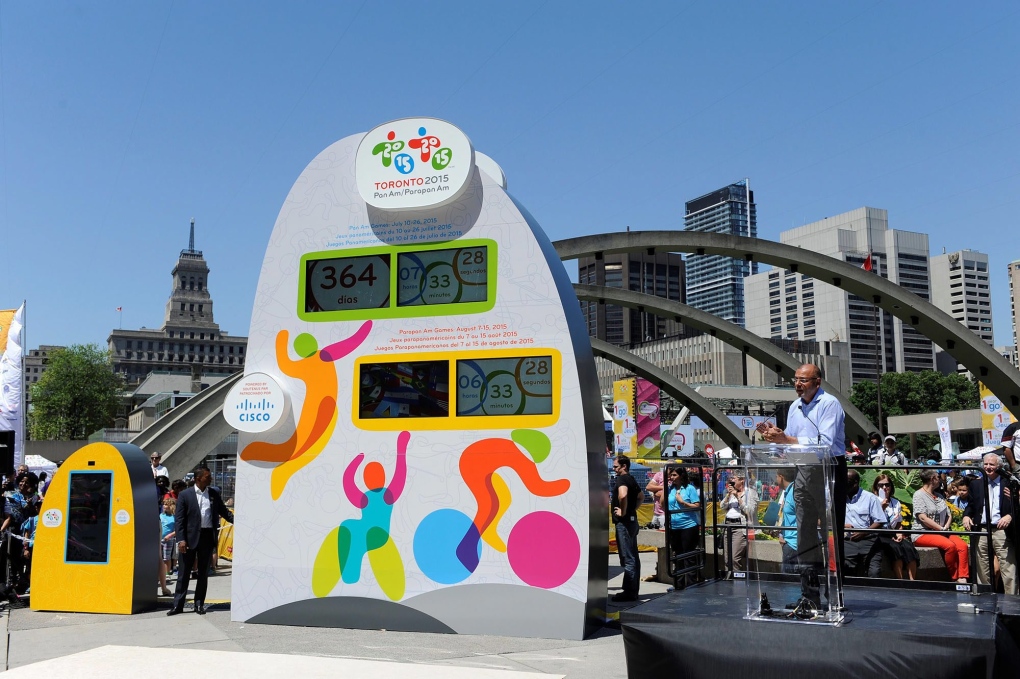 TORONTO -- Plans to redevelop the Toronto Track and Field Centre for the 2015 Pan American Games have been scrapped, leaving Canada's top sprinters outraged.

And delays in replacing the centre's indoor track at York University have left the athletes literally out in the cold.

A spokesman for the Pan Am Games organizing committee confirmed Friday that the plans, which included building a new weight room and meeting rooms, and extending the straightaway of the indoor 200-metre track at York, have been cancelled.

"We remain hopeful that the expanded legacy component for the track and field centre will happen post-Games," said Teddy Katz, the chief spokesman for TO2015.

It's bad news for Canada's top sprinters, who are preparing for the Games in a tiny, cramped room at York.

"We had this expectation coming into the year where we thought, 'This is going to be so amazing, we're going to have an indoor facility, we felt like we were really being taken care of, Pan Ams are coming so everything is going to be great, and it's going to be the perfect setup for Rio (2016 Olympics)," said hurdler Phylicia George.

"But it's been the total flip of that where we're kind of out on our own, like 'Figure things out for yourself, and get it done however you can get it done.' It's frustrating. We try not to harp on it every day, because that's the reality of the situation, I still have to train, I still want to go to Pan Ams and compete well, I can't be sitting down and crying about it.

"We're doing what we can to make sure we can be ready. But is it optimal situation? No, not at all."

George, who was sixth in the 100-metre hurdles at the 2012 London Olympics, trains year-round at York with a national training group that includes Olympic bronze medallist Priscilla Lopes-Schliep, and the members of Canada's men's relay team that won bronze at the 2013 world championships.

A small room inside the fieldhouse -- a building that has barely changed since the days Ben Johnson and Angela Issajenko powered down its track -- is where they lift weights, receive massages, soak in ice baths and hold meetings. There can be a couple dozen people squeezed in at one time.

There is one squat rack and one lifting platform, so there's invariably a lineup to use it, George said.

"When it's really busy, it can get pretty chaotic," said Dontae Richards-Kwok, a member of Canada's relay team. "That's our weight room, that's where we have our meetings, that's where we have the treatment people come in. . . we can have two therapists doing massages, and our coaches might be in there, all our backpacks and stuff. You can imagine with 20 people in the room, that's only 20 feet by 10 feet maybe, it can get pretty hectic."

Adding to their frustration, problems with the resurfacing of the indoor track have delayed its opening, so the sprinters have been training on another outdoor track at a different location in the city, which they often share with the Toronto Argonauts. They would normally move indoors at the first sign of cold weather.

"It's frustrating,"George said. "You want to know that you can be training at your best, and putting your best in, and it just kind of seems like when these things are planned or done, it wasn't well thought out, and the athlete's ability to train wasn't necessarily taken into consideration."

George said they haven't been informed when the track might re-open. The group is leaving for St. Kitts for a warm-weather camp Nov. 20, and she said worst-case scenario is they wouldn't be back inside before then.

The $45.5-million CIBC Stadium is beside the fieldhouse and will host track and field for both the Pan Ams and Parapan Ams. It's jointly funded by the federal government and York University but is owned by the City of Toronto.

In a November 2012 news release, TO2015 organizers said the city would replace the centre's indoor and outdoor tracks in time for the Games, and the stadium would build on the existing infrastructure.

"It will have a 400-metre track and an infield that supports throwing and jumping disciplines, as well as a scoreboard, professional broadcast capabilities, athlete change rooms, equipment storage, classroom space, as well as permanent seating for 3,000 spectators with an additional 2,000 temporary seats. At Games time, seating for 12,500 spectators will be available," the release said.

However, firm details on specific upgrades were not unveiled at that time. While Athletics Canada had certain expectations for redevelopment projects, it appears those plans weren't actually in stone.

"York University representatives did participate in conversations about enhancements to the Toronto Track and Field Centre but there was no formal agreement, project plan or budget to move forward," spokesperson Joanne Rider said in an email. "We are open to exploring potential enhancements following the Games."

Katz couldn't specify the reasons for pulling the plug on the fieldhouse expansion, which Athletics Canada officials applauded when the plan was unveiled two years ago.

"I completely understand (the athletes') frustration," said Athletics Canada CEO Rob Guy. "Here's these athletes who have put their lives on hold, and are trying to win medals for Canada, and there's this great opportunity there and there's as many questions as answers right now."

The timing of the upheaval, Guy added, couldn't be worse.

"Brutal. Brutal," he said. "We've got Pan Am Games where we're being asked to have our best athletes, and the best prepared they can be, and we've got a world championships in Beijing in August, and Rio is 650-some odd days away, and we've got these issues. It's not good."

The July 10-26 Pan Am Games and Aug. 7-15 Parapan Games, which are being held at venues across southern Ontario, are expected to cost about $2.5 billion, including security, transportation and the athletes village.