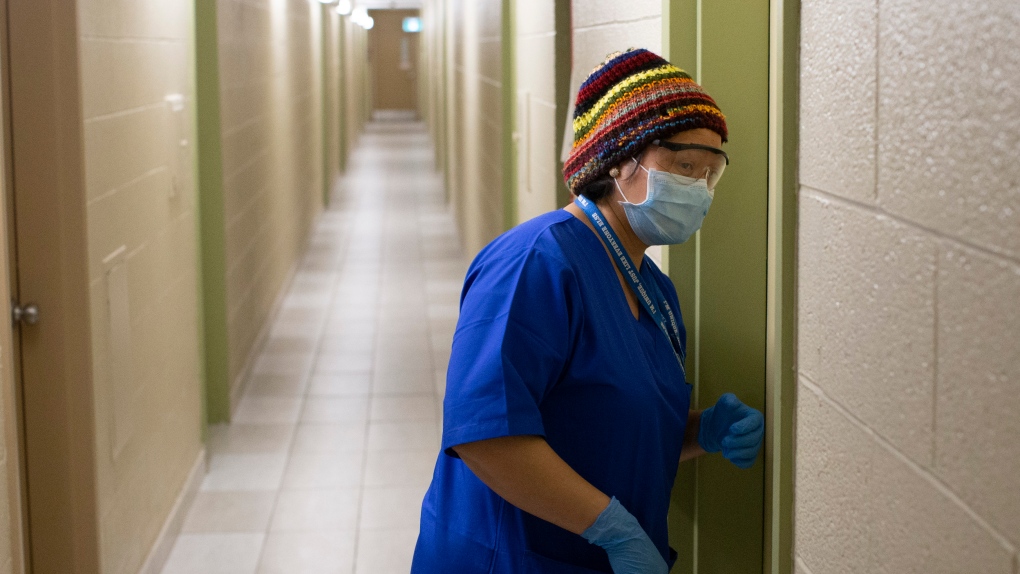 TORONTO -- More than 200 long-term care homes have not yet paid their personal support workers a $3 per hour pay enhancement provided by the provincial government amid the COVID-19 pandemic, according to the Minister of Long-Term Care.

Minister Merrilee Fullerton said there are still PSWs at both Extendicare and Chartwell that have not received the pay on top of their regular wages, according to letters obtained by CP24 that Fullerton wrote on Thursday to the chief executive officers of both for-profit companies.

Fullerton said 217 homes have yet to pay their workers the funds, which were delivered to homes across the province on Dec. 10, 2020.

In the letters, Fullerton said she was “incredibly disappointed” to learn about PSWs who have not yet received the pay and is calling on the CEOs to “immediately resolve this matter.”

“Personal support workers don’t have the option to wait to show up to work, likewise no home should wait to pay them. These frontline heroes are working under extremely challenging conditions and it’s unacceptable that some workers are still waiting for their wage increase,” the Ministry of Long-Term Care’s office said in a statement to CP24.

In Oct. 2020, the government announced that $461 million would be distributed to long-term care homes to “temporarily enhance” the wages of PSWs and direct support workers by $3 per hour during the COVID-19 pandemic.

The extra funds came after the government provided temporary pandemic pay of $4 per hour for frontline workers in long-term care and retirement homes in Apr. 2020. The pandemic pay was effective for 16 weeks from Apr. 24 to Aug. 13, 2020.

Fullerton ended her letters to the CEOs by stating that the companies need to prioritize paying their workers the extra funds “on the same level of importance as it would paying its shareholders.”

An Extendicare spokesperson told CP24 that the pay enhancement has now been applied to all PSWs.

“Pandemic pay has been sent to all eligible personal support workers, including a retroactive payment for the additional amount going back to October 1, 2020. They will receive an additional $3/hour on a go-forward basis," a statement read.

Meanwhile, Chartwell said they have also applied the funds to PSW wages, and that all these workers should receive retroactive pay by Jan. 25.

"Chartwell has 23 LTC homes. 100% have been confirmed as having the top-up now applied to PSW wages, which took place over our first two pay cycles of the month, which alternate for our homes. Further, almost 70% of that PSW group will receive their retroactive payment this coming week, with the final almost 30%, who are on the following week's alternating pay-cycle, to be completed the week of January 25th," a Chartwell spokesperson said in a statement to CP24.

In response to Fullerton's letter, Chartwell CEO Vlad Volodarski said that "we too wish we could have achieved it earlier timed to the December flow of funds."

He said the payment delay is due to various factors, including a delay in receiving details of allocations from the government and a recent conversion to a new payroll system.

"...An organization of our size has complexities of our various collective agreements and some unions took a differing approach to their due deductions from the original $4 allocation which added further complexity. On our own behalf, the timing overlapped with our recent conversion to a new payroll system with this additional pay requiring extra programming to ensure accurate allocations," Volodarski said in a statement.

Ontario Green Party leader Mike Schreiner said the delay in payments is a "slap in the face" to essential workers.

"The fact that they cannot do it in a timely way for the workers that are providing the care for our loved ones is just wrong, it's shameful. The government should be calling them out but quite frankly the government needs to be called out as well," he said to CP24 on Saturday.

SEIU Healthcare is a union that represents more than 60,000 frontline workers and said Premier Doug Ford is failing to properly compensate workers during the pandemic.

"These ongoing failures to pay PSWs pandemic pay are a direct result of his government’s failure to hold greedy nursing home chains, like Chartwell and Extendicare, accountable for mistreating workers and seniors," SEIU said in a statement.

"It’s shameful, but not surprising, that for-profit long-term care corporations feel no urgency in stepping up to support healthcare workers, not even during a pandemic," read the statement.

Residents and staff in long-term care homes have been hardest hit by the novel coronavirus pandemic, which began in March 2020.

As of Saturday 3,162 long-term care home residents and 10 health care workers in these homes have died from the virus. Long-term care home fatalities represent almost 60 per cent of all virus-related deaths in Ontario. The province’s death toll stands at 5,340

There are currently 250 active outbreaks of the virus at homes across the province.