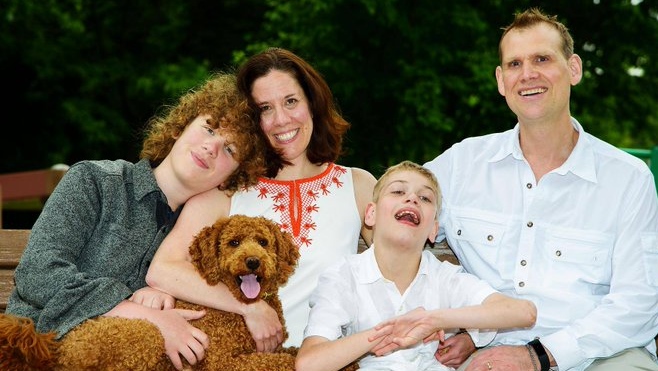 TORONTO -- Keith McArthur knew well before COVID-19 made its way to Toronto that the virus could prove to be a significant threat to him and his family.

McArthur received a kidney transplant five years ago and has been required to take medication that lowers his immune system as a result, rendering him at higher risk of getting seriously ill or dying if he contracted COVID-19.

“I remember reading about the situation in Italy at the time … I read something about how people who had had transplants were not being prioritized,” McArthur told CTV News Toronto on Tuesday.

“It really kind of scared me right from the beginning.”

“​​[Bryson] has cognitive and physical disabilities and it's hard for him to focus on a screen, so the online schooling system just didn't work out for him and he basically lost the year,” said McArthur.

“For him, schooling is about more than just learning and the social aspect. He also gets things like speech therapy and physiotherapy through school and so he lost out on all of those too.”

Because of their high-risk situation, McArthur and his family have been practicing strict social distancing procedures. They have not been able to enjoy the amenities available as the city begins to reopen.

“For the last 16 months, we've had to really do an ultra, ultra lockdown,” he said.

The McArthurs were looking forward to receiving their vaccinations, thinking could be their path back to a semi-normal life.

“Our whole family was really excited to get our vaccines and kind of move past it,” McArthur said.

“Bryson was about to get his vaccine — his final vaccine as well — so it felt like, finally, we were really close.”

However, Keith’s vaccinations didn’t prove to be as effective as he’d hoped.

After undergoing tests, results showed that his body had developed no antibodies against the virus, due to the medication he takes.

“My results came back and showed that I didn't have any antibodies at all,” McArthur said.

Our pandemic isn’t over. A thread about families who have been double-vaxxed but see no end light at the end of the tunnel. Families like mine. (1/28) pic.twitter.com/DiQxR8MCJf

According to a study led by Dr. Brian J. Boyarsky at John Hopkins Medicine, this result is not entirely rare in transplant patients. In fact, only 54 per cent of patients examined were able to develop sufficient antibodies.

McArthur says he is aware there are currently studies working to prove that a third dose of a COVID-19 vaccination may provide increased immunity from the disease in transplant patients, although that option has not yet been approved in Canada.

“The other thing I wanted to do was to see how do we put pressure on our government here to allow third doses,” he said.

“There have been studies that have show that a third dose won't help everybody in my situation, but it does help at least some people.”

At this point, McArthur hasn’t been advised on just what and how many precautions families like his should take. He says he doesn’t know whether he should send his kids to school next year.

“It would be fine for me to just keep isolating. I work from home anyway, but the really hard part is what it means for my kids,” he said.

When reached for comment, Ontario’s Ministry of Health said that “since all Health Canada authorized COVID-19 vaccines are not live vaccines, they are considered safe in these groups, however, there is limited data on efficacy.”

The Ministry pointed immunocompromised residents to a document outlining their recommendations. It instructs those who are immunocompromised to check in with their “treating health care provider regarding the timing of vaccination to discuss immunosuppressive medication management/timing in relation to their vaccination.”

It provides no guidance to those who developed no antibodies from the vaccination.

McArthur has gone as far as to have discussions with his family about him moving out, or into a basement so that his sons can attend school next year safely.

“Part of the challenge is that Bryson also needs 24/7 support, so it'd be really hard to leave,” he said.

Until new guidance is provided, the McArthurs will have to continue living with strict lockdown measures.

“It leads us to this feeling that we're going to be stuck in this for a really long time.”