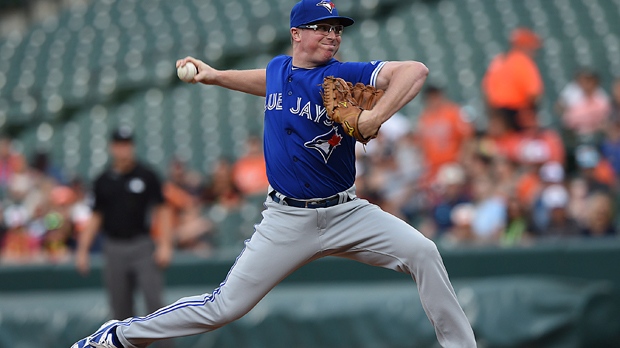 BALTIMORE -- Rookie John Means tied a season-high with seven strikeouts and the Baltimore Orioles took the series opener from the Toronto Blue Jays 4-2 on Tuesday night.

Means (6-4) allowed one run on four hits with three walks over five innings and lowered his ERA to 2.60.

Baltimore reliever Shawn Armstrong threw a pair of scoreless innings with three strikeouts. Miguel Castro entered and allowed a bloop RBI double to Randal Grichuk that pulled the Blue Jays 3-2 in the eighth.

The Orioles answered in the bottom half with a double that scored Stevie Wilkerson for a key insurance run. Mychal Givens picked up his sixth save.

Eric Sogard led off the game with his sixth home run for the Blue Jays, who dropped their fifth straight game and have lost 11 of 13.

Blue Jays rookie right-hander Trent Thornton (1-5) loaded the bases on three walks in the second, but the Orioles couldn't capitalize. Baltimore took a 2-1 lead the following inning on back-to-back doubles by Trey Mancini and Chance Sisco.

The Orioles extended the lead to 3-1 in the fourth when a pop up by Santander landed between the second baseman Sogard and right fielder Grichuk.

Toronto has scored two or fewer runs in five consecutive games for the first time since 2014.

The Orioles have signed 20 of the 41 players taken in this year's MLB draft, the highest being fourth-round pick Joey Ortiz, a shortstop from New Mexico State. General manager Mike Elias still expects “everything to go smoothly” with signing catcher Adley Rutschman, the No. 1 overall pick from Oregon State.

Orioles: RHP Alex Cobb will undergo season-ending hip surgery. He went 0-2 with a 10.95 ERA in just three starts this season. “He clearly hasn't been 100 per cent and it's more important to us that we get this issue corrected at the right time and have him 100 per cent for next spring training,” Elias said.

Orioles: David Hess (1-8, 7.08 ERA) is looking to recapture the form of his first start April 1 against Toronto when he carried a no-hitter into the seventh inning. He has since gone winless with an 8.20 ERA over his next 11 appearances.