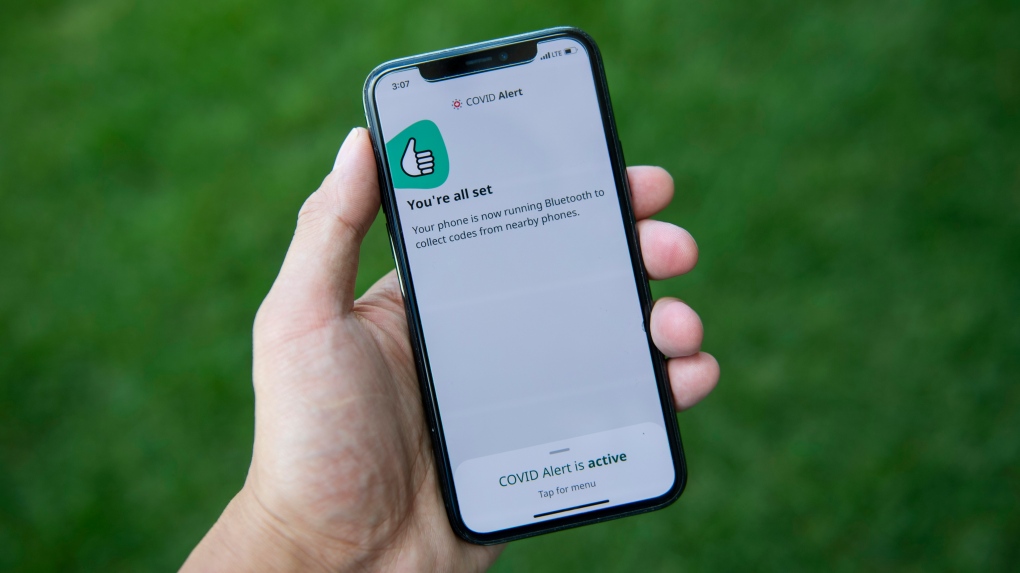 The COVID Alert app is seen on an iPhone in Ottawa, on Friday, July 31, 2020. The app tracks the locations of phones relative to other phones, and notifies users if they have been in proximity to another app user who has tested positive for COVID-19. (THE CANADIAN PRESS/Justin Tang)

TORONTO -- Thousands of Ontario civil servants will soon have the COVID Alert app downloaded onto their government-issued smartphones this week, as the province looks to increase the app's usage ahead of the Thanksgiving long weekend.

CTV News Toronto has learned the app will be remote installed on more than 25,000 government-issued smartphones used by employees with the Ontario Public Service (OPS).

While the app would begin appearing on OPS phones starting today, sources in the Ford government say its usage would still be optional – keeping in line with the voluntary nature of the app.

Employees would have the choice of authorizing the exposure notification settings on their work phones, allowing the app to run in the background, or to delete the app altogether.

Sources in the Ford government, who are not authorized to speak publicly on the issue, told CTV News Toronto the province is hoping other crown agencies such as the LCBO, Ontario Power Generation and Ontario Lottery and Gaming corporation would take similar steps and remote-install the app on their company-issued phones.

Several employee unions – which were briefed on the decision by the government this week – expressed concerns about the effectiveness of the app, considering the difficulty getting testing appointments, the processing backlog, and the wait time for results.

Dave Bulmer, the president of the Association of Management, Administrative, and Professional Crown Employees of Ontario (AMPACEO), said the union will still support the government's decision.

"We're supportive because it's in the best interest of public health," Bulmer told CTV News Toronto. "We've been provided with all the assurities that privacy will be protected, it's voluntary [and] it has good intentions."

The remote-installation plan is also being supported by Warren 'Smokey' Thomas, President of the Ontario Public Service Employees Union (OPSEU).

The move by the Ford government follows a similar step by Toronto City Council to install the app on more than 9,200 mobile devices managed by the city.

On Wednesday, the government of Manitoba announced more than 7,300 cell phones used by civil servants would receive a notification that would enable employees to direct-download the app.

While the made-in Ontario app was first launched on July 31, the uptake has been slow despite repeated pleas from Prime Minister Justin Trudeau and Premier Doug Ford to download it.

As of Tuesday, COVID Alert was downloaded 3.9-million times and at least 877 Ontario residents have used the app to let contacts know about a potential exposure.