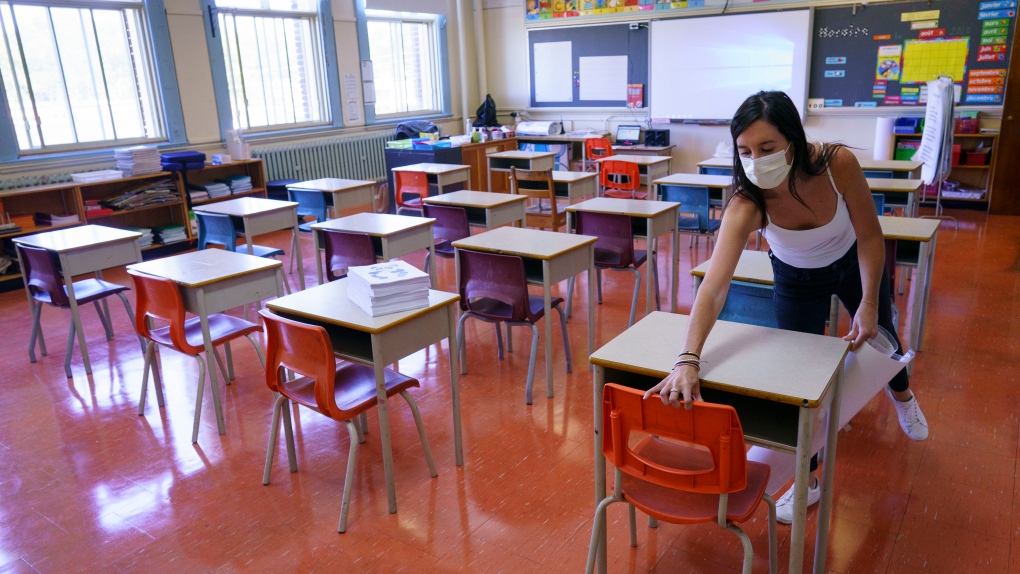 In this file photo, grade one teacher Heidi Dimou arranges the desks in line with physical distancing policy in her class at the Willingdon Elementary School in Montreal, on Wednesday, August 26, 2020. THE CANADIAN PRESS/Paul Chiasson

TORONTO -- Ontario will be releasing their fall school plans in July, according to the province’s education minister.

Stephen Lecce made the comment Thursday afternoon, saying the final guidance on COVID-19 regarding in-person learning will come from the chief medical officer of health.

“With respect to the final guidance, I've always said the chief medical officer of health, in July, is going to make an assessment of our COVID vaccine rates for students and staff, as well as the broader public health indicators, where the COVID case numbers are, and the trajectory we're on. That was the plan for last year, it's what we're doing this year,” he said.

Lecce said that he has spoken with the current Chief Medical Officer of Health Dr. David Williams, as well as Dr. Kieran Moore who will be taking over the role, and they both reaffirmed the July timeline.

“They believe in July, we'll be able to provide that final guidance with the aim of a more normal, more positive, and more interactive school experience for children that is fully in class, where we believe children belong.”

Some Ontario school boards have already released a partial plan for September that would see the “quadmester" system for high schoolers come to an end.

Lecce added that his government approves the modified cohorting plan for the fall.

“But let's be clear, the approval of that plan is always predicated on the chief medical officer of health office giving us the green light,” he said.

For the 2020-2021 school year, high school students took two courses at a time for about nine weeks, with a mix of in-person and online learning. The government has previously said that remote learning will remain an option for the next school year.

The back-to-school comments were made following an announcement of a “new four-year-strategy to recruit, train and retain more French teachers.”

Lecce said that the government expects the demand for French-language teachers to grow over the next five years.

The strategy will involve a $12.5 million investment.