TORONTO -- Ontario's finance minister says he will deliver a fiscal update today focused on supporting the province's health-care system as it responds to the COVID-19 pandemic.

Rod Phillips says the update will be delivered in place of the province's now delayed annual budget, which may not be released until November. 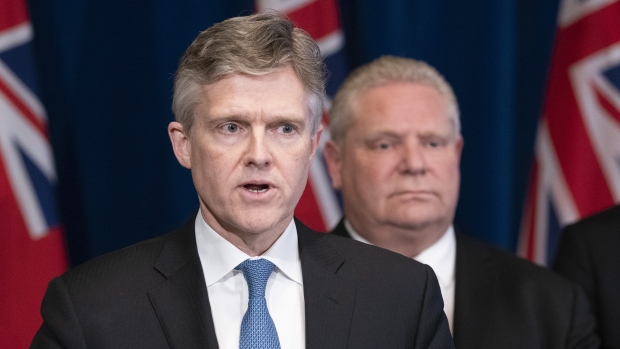 Phillips says the update will include a "significant focus" on providing supports to the health-care sector, as well as supports for businesses and the economy overall.

The legislature will meet in a special session to vote on the package, with only 28 politicians present in order to maintain social distancing.

Premier Doug Ford has promised it's just the first step of provincial support during the pandemic.

Phillips says the update will also serve as an important signal to the many groups the province funds such as municipalities, school boards and hospitals.

"It's also going to make clear to Ontarians we've got the money to support our health-care system, we're going to be supporting jobs and people as well and that their government has a plan," he said.

Phillips said the update won't contain any long-term fiscal projections, something normally seen in a provincial budget. The unpredictable circumstances surrounding the pandemic make things too uncertain, he added.

"What we won't be doing tomorrow is providing any multi-year projections," he said Tuesday. "That's because it would be impossible to do so at this time. We'll do that, hopefully, when the dust has cleared and we have a better sense of things."

The legislature will meet for a short debate of the bill which is expected to pass. It's also expected that the session at Queen's Park will be adjourned until April 14 because of the pandemic.