TORONTO -- Ontario will go into a four-week, provincewide shutdown on Saturday as the government pulls its “emergency brake” in an effort to curb the spread of COVID-19 variants.

Premier Doug Ford announced on Thursday afternoon that the shutdown will begin on April 3. As a result, in-person dining will be shuttered yet again and further gathering restrictions will go into effect across Ontario

“All 34 public health regions will move into shutdown for a period of four weeks,” Ford said.

“Friends, right now we're into a third wave of COVID-19. The variants of concern are spreading rapidly. This is a new pandemic. We're now fighting a new enemy.”

The government is using the term “shutdown” to describe the province’s third pandemic lockdown. According to the government’s guidelines, a shutdown—which appears as a sixth, white-coloured tier in the government’s framework—is similar to the old grey zone rules in which retail is allowed to open with strict capacity limits.

Under the guidelines, personal care services and gyms will be closed. Essential retail stores will be able to operate with a 50 per cent capacity limit, while other retail businesses, including big box stores, can operate at 25 per cent capacity.

Schools and child-care centres will remain open and the planned April break for students and teachers will go ahead as planned. Day camps, however, will be required to close.

As a result of an alarming surge in COVID-19 across the province, our government has made the difficult but necessary decision to implement a provincewide emergency brake, effective Saturday, April 3, 2021, at 12:01 AM for at least four weeks.

The province will not be issuing a stay-at-home order, but are asking residents to limit trips outside of their home, unless it's for essential reasons.

Essential reasons to leave your home include trips for food, medication, medical appointments, supporting vulnerable, community members, or exercising outdoors with members of their household.

“We are not going to be producing a stay-at-home order because we saw that last time that it had tremendous ill effect on both children and adults,” Ontario Health Minister Christine Elliott said, adding that the government wants people to be able to go outdoors and enjoy the warmer weather, while also adhering to proper health protocols.

“What we are introducing is an emergency brake shutdown that allows some activities to be carried out, but the lockdown we know, with the warmer weather coming, with all that we've asked Ontarians to sacrifice, is too difficult to do and we also of course have to balance any measures that we take with people's mental health as well. So that's why we chose the emergency brake shutdown, rather than the lockdown.” 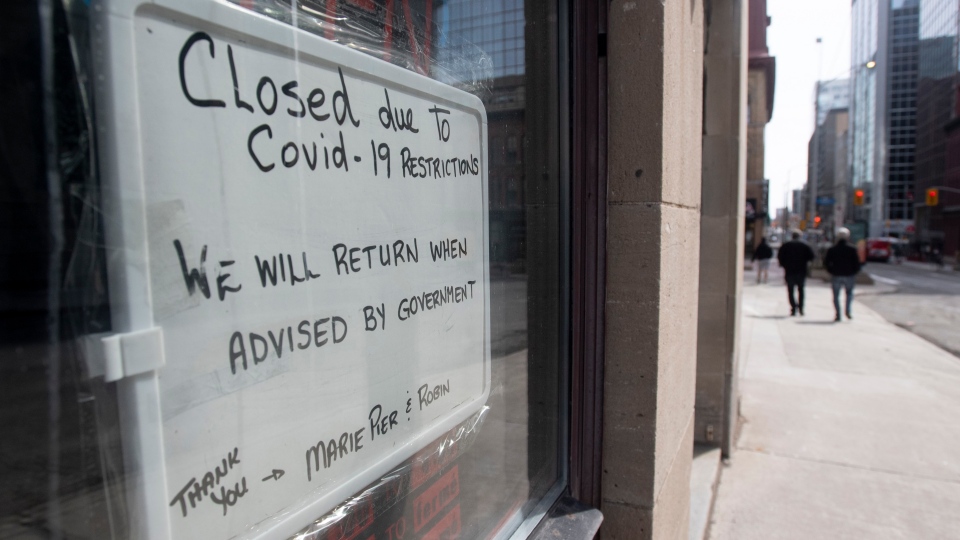 While the province is in shutdown, the rest of the government’s tiered framework will be paused.

Toronto and Peel Region have been under a lockdown since November 2020. After the provincewide stay-at-home order was issued following the Christmas break, the two areas were placed into the grey zone of the province’s framework, which is similar to the shutdown going into place on Saturday.

Last week, the Progressive Conservative government made some tweaks to the framework, allowing outdoor patios to open and outdoor fitness classes to operate in the grey zone and indoor dining capacity was increased in the red zone.

Personal care services were slated to open in grey zones on April 12.

FULL LIST: What you can and cannot do in Ontario's shutdown

On Thursday, the province reported 743 new cases in Toronto, 484 in Peel Region and 311 in York Region.

When asked what kind of difference the shutdown can make in COVID-19 hot spots such as Toronto and Peel, Ford said that the strongest aspect of the policy is that it is provincewide policy.

“We've seen variants in the virus spread all over no matter if it’s Sunbury, up to Thunder Bay, down in London, we see it spreading at a rapid pace. So it's a complete shutdown of the entire province,” he said. 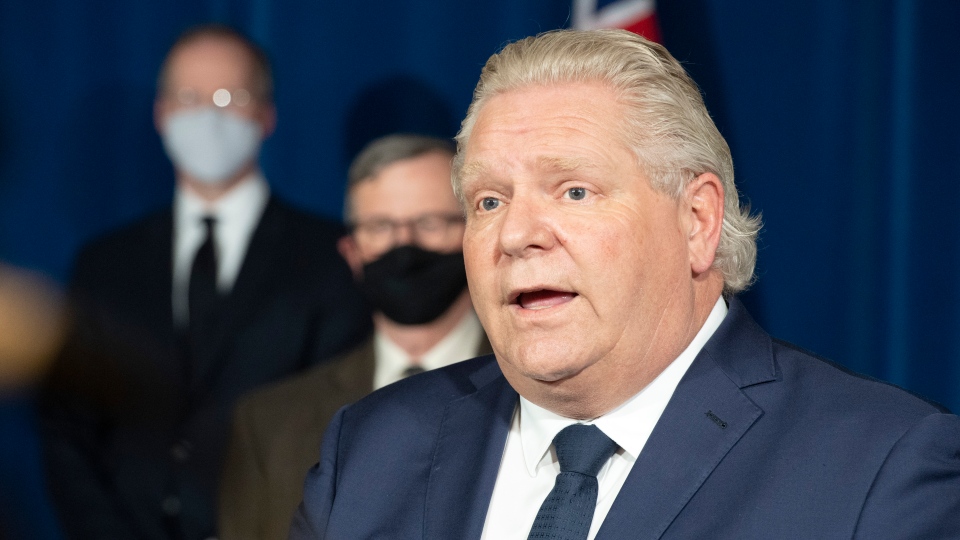 The premier made reference to the effectiveness of the last provincewide lockdown that went into effect on Dec. 26, 2020. During that time, Ontario saw a drastic decrease in daily-reported COVID-19 cases as well as hospitalizations.

However, during that lockdown the province issued a stay-at-home order making it illegal to leave your home for non-essential purposes and shuttered all non-essential businesses.

Ontario’s Chief Medical Officer of Health said that while the grey zone restrictions may not appear as though they worked, the framework has kept the novel coronavirus “contained” and prevented a worse outcome in the hot spots.

“I would disagree. The lockdown has worked,” he said. “If it didn't, it would be worse by far, with a doubling the numbers every seven to 10 days, which we have not seen.”

‘Too little too late’: Opposition says of shutdown

“It’s a too little too late response by this government to what we knew was coming,” she said. “What we know is that these public health measures that this government has announced are not what experts are calling for.”

Health-care experts have been calling for a lockdown over the past month as COVID-19 patient ICU admissions rose to its highest level since the beginning of the pandemic. In new modelling data released hours prior to the shutdown announcement, Ontario’s COVID-19 science Table said that even with a stay-at-home order and vaccinations in place, admissions to intensive care units could reach 800 by the end of the month

COVID-19 cases could fall to between 1,000 to 1,500 a day by the end of April if the province activates a stay-at-home order for four weeks, the table said. If no further public health measures are implemented, daily case counts could rise to 6,000 by the end of April. 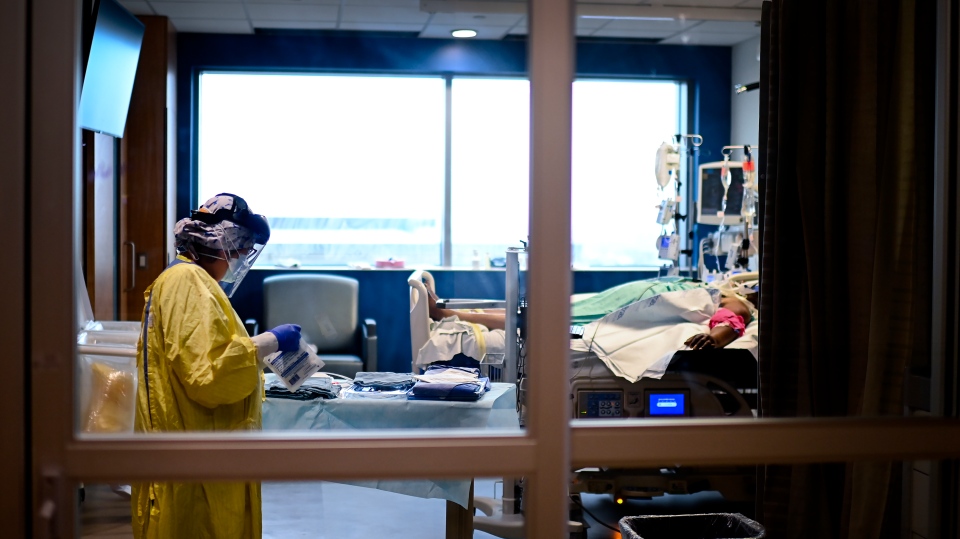 Thursday morning, more than 150 doctors working in Ontario’s intensive care units wrote a letter to the premier urging the government to implement stricter public measures to stop the spread of COVID-19, and to not rely on intensive care unit (ICU) capacity as a benchmark for when change is needed.

“We are seeing younger patients on ventilators – many are parents of school-aged children. We are seeing entire families end up in our ICUs,” the doctors said. “About four in 10 patients who come to the ICU with COVID will die. More than half of patients requiring mechanical ventilation due to COVID will die.”

"We cannot rely on the public health measures framework. It did not contain the less infectious, less deadly original variant in Wave 2 and it will not be enough to protect us from (variants of concern) in Wave 3. Immediate public health interventions are needed today in order to curb transmission and prevent further unnecessary deaths.”

While speaking about the fact that younger people are being hospitalized with COVID-19 variants, Ford made reference to “a lot of people gathering.”

“We're seeing a spike in the younger age group and I just ask the young people, please you aren't invincible,” he said.

“I don't want your kids or anyone's kids sitting there in ICU, a young healthy person, just because they thought they were invincible. That's, that's terrible, so we have to do everything we can to make sure people's habits change, they don't let their guard down.”

Dr. Michael Warner, the medical director of critical care at Michael Garron Hospital, took to Twitter following the news conference to say that his intubated patients were not congregating by choice.

“They were working in essential jobs where they have the highest exposure risk and the least protection. Do not insult their sacrifice.”

Despite what @fordnation says.
My intubated 30-50 year old #COVID patients were not congregating by choice.

They were working in essential jobs where they have the highest exposure risk and the least protection.

Do not insult their sacrifice.

Horwath reiterated on Thursday that while announcing the shutdown, the government did not mention a strategy to vaccinate frontline workers or provide paid sick days to encourage employees to stay home if ill.

“I really want to say to people, do your best. It’s not your fault. The government hasn’t provided the necessary leadership to prevent us from getting to exactly where the experts warned we were going to be.”