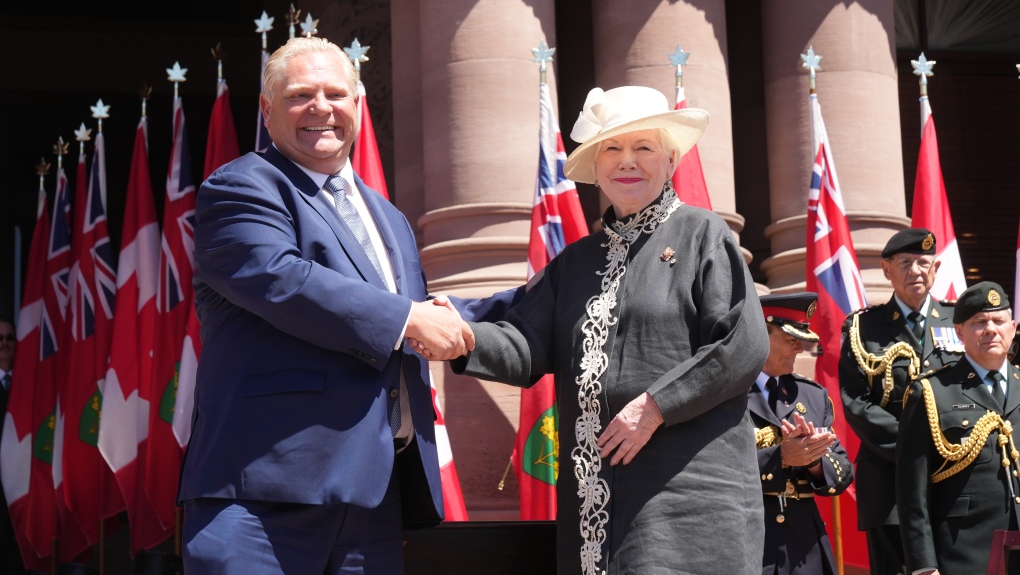 Premier Doug Ford shakes hands with Lieutenant-Governor of Ontario Elizabeth Dowdeswell prior to the announcement of his new cabinet at the swearing-in ceremony at Queen’s Park in Toronto on June 24, 2022. THE CANADIAN PRESS/Nathan Denette

The Ontario government has confirmed that the provincial throne speech will take place on Aug. 9, signalling the start of a rare summer session.

A spokesperson for Premier Doug Ford’s government said the speech, to be delivered by Lt.-Gov. Elizabeth Dowdeswell, will take place a day after the legislature returns to Queen’s Park.

Ford confirmed last month that the legislature will sit for roughly five weeks during the summer session.

In that time, Ford's Progressive Conservatives, who return to the Chamber with a second majority government, will look to pass their provincial budget which was introduced but not passed before the June election.

The budget, which the PCs leaned on as their campaign platform during last month’s election, will be largely the same as what was introduced this spring, with some changes, including an increase in Ontario Disability Support Program funding, according to Finance Minister Peter Bethlenfalvy.

The throne speech comes at the beginning of any new legislative session and lays out the government’s goals and plans to achieve them.

Dowdeswell acts as the monarch’s representative in Ontario and will deliver the speech to the MPPs in attendance, many of whom will be attending the chamber for the first time as newly-elected legislators.

The tone of this address will likely be much different from the one delivered in October of last year, where the government said avoiding future COVID-19 lockdowns was the "ultimate goal.”