TORONTO -- When Sofi Ishikura and Callie Leszek saw what was happening with the Black Lives Matter protests, they knew they couldn’t sit idly by.

“We were sitting in my backyard, and we were just talking about the amount of stuff we’re seeing on the news at the moment, and trying to find a way for us to make a change, or at least try to,” Leszek told CTV News Toronto.

“Just seeing everything you kind of feel the need to do something about it a bit,” adds Ishikura. “And like, do your part.”

The Grade 9 students from Humberside Collegiate came up with an idea for a fundraiser – they would sell posters supporting the Black Lives Matter movement to their family, friends and neighbours.

“We reached out on Facebook asking if there were any designers who were able to volunteer to help us out to create a fundraiser, and we had an amazing designer reach out to us and say she was more than happy to,” says Leszek.

“We gave her some ideas, and she was able to recreate them in her own way, and it was really helpful,” adds Ishikura.

In the end, the girls had three posters. They shared the posters with CTV News Toronto over a ZOOM call.

“The first one, which is the rainbow fist, that’s kind of the Pride one with the Black Lives Matter movement,” Leszek explains. “And then we have ‘This Home Believes Black Lives Matter’ and the BLM one that shows that we’re all together and we’re going to fight for change together.”

The fundraiser took off. Ishikura and Leszek began selling the posters for $15 each, and quickly raised nearly $3,000.

“We decided to donate it to Black Lives Matter Toronto because we thought it was important to do something local,” explains Ishikua.

The teens have been hand-delivering the posters to those who purchase them, often making the deliveries by bicycle. They say it has been exciting to see their posters in the windows of people’s homes.

“When people walk down the street and they see these posters everywhere, they know they have allies,” says Leszek. “We’re supporting them, there for them, and that we’re all working together to try to create change.”

Eleonor Lentini purchased one of the posters, saying she wanted to support the students’ initiative and efforts. 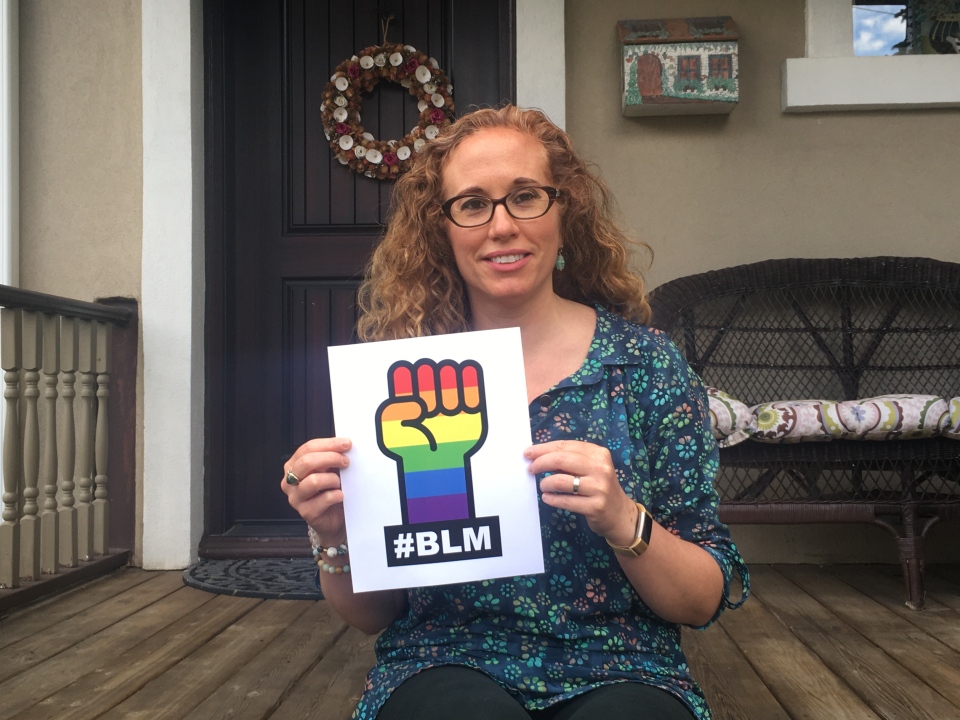 “I have two sons. I want them to hear the message,” Lentini says. “A lot of racism comes from the home. It starts from the home and it branches out, and we’re proud to place [the poster] on our window.”

Lentini also tells CTV News that she’s impressed by what Ishikura and Leszek are doing at a young age.

“These ladies are our future,” she says. “I just loved the fact that Callie and Sofi are in Grade 9 and took this on. There’s so much that the youth can do.”

Ishikura and Leszek have been friends since long before high school, having met in daycare at age two.

“We’ve been best friends ever since,” says Leszek, smiling.

“I think [the fundraiser] has brought us closer together!” adds Ishikura.

The teens hope that using their voices to support the Black Lives Matter movement will inspire other young people to use theirs, too.

“I know we’re fortunate. We’re lucky, and so we felt we needed to do something to help others,” Leszek says. “So much of the population is under 18 and they sort of feel powerless throughout this. We can show them that there’s things you can do to make a difference.”

“Right now, with everything happening, the only way to make change is if everybody makes change.”

The posters can be purchased at Cookery on Roncesvalles Avenue in Toronto for anyone who would like one of their own.