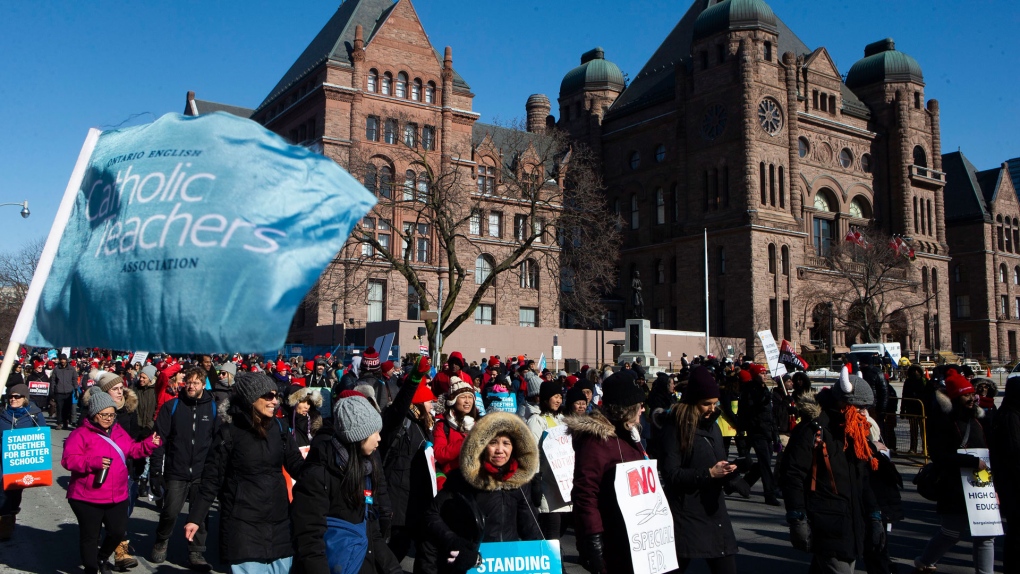 TORONTO -- Ontario teachers and education workers are planning a second mass demonstration at the legislature this week.

Secondary teachers represented by the Ontario English Catholic Teachers' Association and Toronto members of the Ontario Secondary School Teachers' Federation plan to congregate at the legislature on Thursday, as the Catholic teachers hold a provincewide strike and high school teachers engage in a rotating strike.

The teachers have told legislative security they are expecting about 15,000 people -- which would be about half the expected crowd at a legislature protest last month, when elementary teachers were also involved.

The Elementary Teachers' Federation of Ontario is not engaging in any strikes this week, but the union has said if contract deals aren't reached by Friday, they will begin a new phase of strikes effective Monday.

The secondary school teachers federation has not bargained with the government since Dec. 16, but has been involved in informal, exploratory talks since Sunday.

Issues in this contentious round of education bargaining include increased class sizes, mandatory e-learning, seniority-based hiring rules and compensation.

The Progressive Conservatives announced last March they would increase average high school class sizes from 22 to 28 -- which would lead to thousands of fewer teachers in the system -- and require students to take four e-learning courses to graduate.

The government has partly backed off on both issues, offering instead to increase average high school class sizes to 25 and require two online learning courses, but the unions say the concessions don't go far enough.

All the unions are also asking for around two per cent in annual salary increases, but the Ontario government has passed legislation capping raises for public sector workers at one per cent for three years.

Education Minister Stephen Lecce has said increases to salary and benefits are among the biggest sticking points in negotiations. During the most recent day of talks with the Catholic teachers, he has said they are asking for more benefits.

This report by The Canadian Press was first published on March 3, 2020.