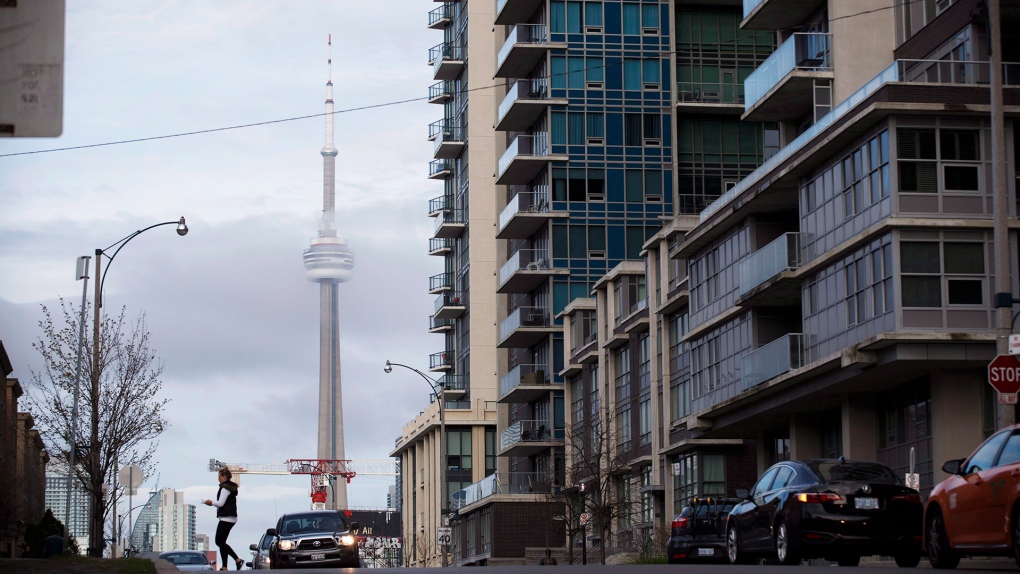 The CN Tower can be seen behind condos in Toronto's Liberty Village community in Toronto, Ontario on Tuesday, April 25, 2017. THE CANADIAN PRESS/Cole Burston

TORONTO -- University of Ottawa law student Nina Haroune has paid thousands of dollars in rent over the past four months for a downtown apartment just minutes from campus, despite the fact she's been living with family in Mississauga.

The 23-year-old is one of many post-secondary students who are locked into off-campus lease agreements despite moving back home when classes moved online.

"This situation left me in a very bad financial position," said Haroune, who's been receiving the Canada Emergency Response Benefit.

"I had to rely on CERB to continue paying for my rent because job opportunities were scarce and I was here worrying about an empty apartment hours away from me."

Haroune said she moved to Ottawa in September 2019 to attend classes, but moved back home after the provincial state of emergency forced the school to close its doors in March and move all courses online.

"The landlord said that because the apartment was still available and safe to live in, and because I was making a choice to go back home, it wouldn't be sufficient reason to break out of the lease," Haroune said.

In the early days of the pandemic, students in other parts of the province petitioned to have their rent fees waived as classes moved online and they moved out.

Some in Kitchener-Waterloo called for financial support after both universities in the area -- Waterloo and Wilfrid Laurier -- told students that all of their classes and exams for the rest of the school year would take place online.

Their petition garnered more than 7,500 signatures.

Soheir Mehdi, a 23-year-old studying French at Wilfrid Laurier, said she had to leave campus grounds immediately after the state of emergency was announced.

She also lost her on-campus job and decided to move back to her family home in Mississauga as she could no longer afford her expenses and rent.

Mehdi, who shared a home with four roommates and pays around $600 a month in rent and utilities, said many students who renewed their leases in February had no way of knowing what they were in for.

She said she was one of the lucky ones, and was able to secure a job as a financial consultant during the pandemic that's keeping her rent paid until her lease ends in August.

Others who renewed their leases in February are stuck in limbo as the school has yet to make an official announcement on its plans for September.

Benjamin Ries, a housing lawyer at Downtown Legal Services at the University of Toronto, said there are some potential remedies for the situations Haroune, Mehdi and others find themselves in.

"If a tenant has already paid but they take the position that their tenancy should have ended earlier, there is an application that they can get their money back up to a year since then," he said.

Ries also said landlords have a duty to minimize a tenant's losses if they can.

"They can't just sit there and say you owe them rent for the rest of the year. They are required by Residential Tenancy Act and common law to find another tenant if it's a possibility."

Ries said an option for Haroune could have been to look for a replacement tenant on her own and sign her lease over to them.

But if the tenant fails to find someone to take over their lease, he said, they are on the hook for their rent -- and it might not be easy to find someone in university towns where economies have faltered during the pandemic.

Another option, which Ries said applies to Mehdi's case, would be an argument of "frustration," which can be used when an unforeseen event happens that is neither party's fault and as a result makes it hard for someone to pay their dues.

This report by The Canadian Press was first published on August 3, 2020.