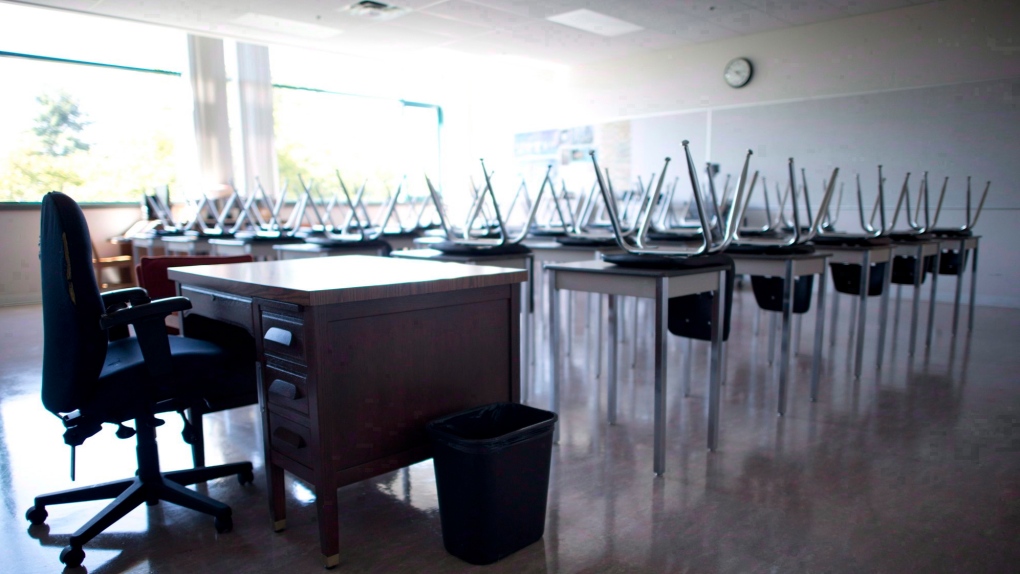 A empty teacher's desk is pictured in an empty classroom is seen on Sept. 5, 2014. THE CANADIAN PRESS/Jonathan Hayward

High schoolers across Ontario are lobbying their school boards and the province for a "freeze" on grades for the remainder of this Omicron-interrupted semester after some boards said final marks wouldn't fall further than where they were at the end of last year.

The students behind various petitions -- which have together garnered more than 15,000 signatures supporting the call for a grade freeze-- have formed a sort of unofficial network, sharing information about advocating for what they say would be a more equitable system that accounts for the complexities of the COVID-era classroom.

"This constant transition back and forth between online to in-person, online, without any idea of what's going to happen next, has taken a large toll," said high school senior Kake Jin, one of the organizers of a petition targeting the Ottawa-Carleton District School Board.

"It's just the general ominous atmosphere that's putting a lot of stress on students."

Ontario has moved between in-person and remote learning several times since the pandemic hit. Most recently, students began the winter term with remote learning as COVID-19 cases soared, and returned to physical classrooms this week.

Jin said she was struck by the number of empty desks when she returned to in-person learning a few days ago.

She didn't know if her missing classmates were in isolation after being exposed to COVID-19, if they had come down with the virus, or if they were staying home out of fear.

But she did know it wasn't an ideal learning situation.

Students' performance may falter as they try to study for exams while under pandemic-induced stress or miss classes due to isolation requirements, Jin said, so those in boards where grades won't fall further are at an advantage.

"It can't just be sprinkles over here and sprinkles over there," she said. "Right now we need to make sure that everyone's needs are getting met. And having inconsistencies, and disparities between different boards really isn't solving the issue."

A spokesperson for the Ottawa-Carleton District School Board said it's already cancelled summative assignments and exams, which would typically account for 30 per cent of a student's final mark, so that "final marks would be based on 100 per cent on term learning."

"We recognize and value the initiative of student leaders in putting together a proposal regarding marks and advocating on behalf of fellow students. We hear the concerns that they are raising and have reached out to OCDSB student trustees and other student leaders to discuss this issue," Darcy Knoll said in an email.

The Toronto District School Board has said it won't deduct marks from high schoolers for assignments completed after Dec. 17, 2021, but students can still use those assignments and tests to improve their grades.

The Peel District School Board, among those targeted by petitions, announced it, too, would prevent grades from dropping.

A spokeswoman for Education Minister Stephen Lecce said the province is allowing boards to be flexible.

"One area where we heard the need for flexibility is the type of assessment teachers could use in determining final grades. In most cases, this may mean an extended essay or report, as opposed to a single exam for 30 per cent of the grade, which would enable students to demonstrate their learning in the class," Caitlin Clark said in an email.

The Ministry of Education implemented a mark freeze provincewide when the COVID-19 pandemic first shuttered schools in 2020.

Mariam ElSahhar, a Grade 11 student in Ottawa, said many of her peers are concerned that students in boards where grades can't fall will have a leg up when it comes to applying to post-secondary education.

"Some people from those school boards might see an admissions advantage," she said.

Faltering performance during a pandemic, particularly when going back and forth between in-class and online learning, doesn't affect students only at certain boards, she said.

"This is a problem all across the province," she said.

Todd Cunningham, a child psychologist and assistant professor at the University of Toronto's Ontario Institute for Studies in Education, said ElSahhar is right.

"Every time we move from in-person to online, or online back to in-person, it takes about a week or so for both the students and the teachers to readjust," he said.

"If the majority of their marks for a course were coming at the end of the term -- which often they do in terms of final tests and projects -- then those students would be at a disadvantage, because there's a high probability that they wouldn't be able to demonstrate their full learning capacity or potential."

This report by The Canadian Press was first published Jan. 20, 2022.

Russia asserted Saturday that its troops and separatist fighters had captured a key railway junction in eastern Ukraine, the second small city to fall to Moscow's forces this week as they fought to seize all of the country's contested Donbas region.

Federal Conservative leadership candidate Patrick Brown says calling social conservatives 'dinosaurs' in a book he wrote about his time in Ontario politics was 'the wrong terminology.'

A seven-person civil jury in Virginia will resume deliberations Tuesday in Johnny Depp's libel trial against Amber Heard. What the jury considers will be very different from the public debate that has engulfed the high-profile proceedings.