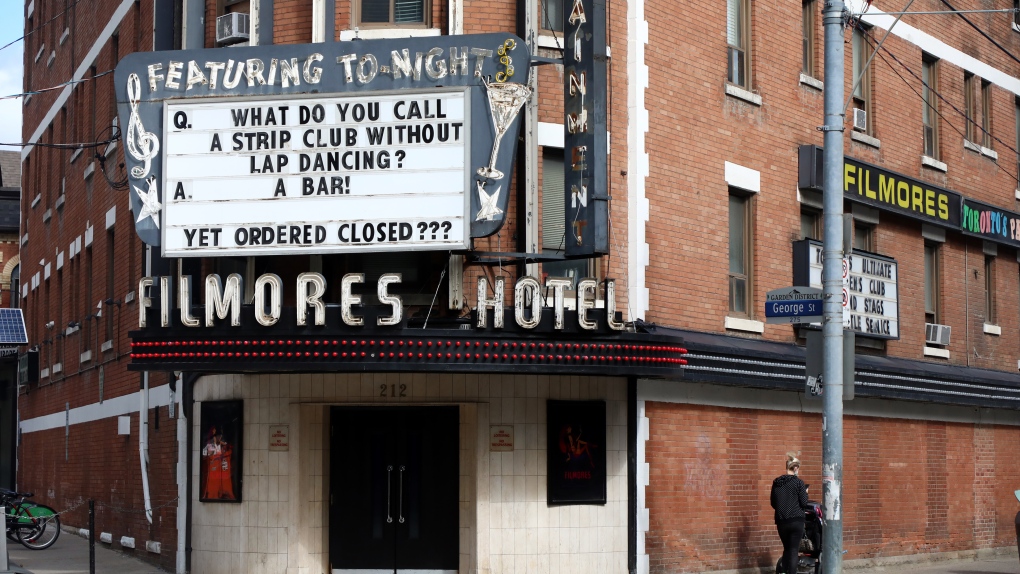 A prominent downtown Toronto strip club is seen on Tuesday, Sept. 29, 2020. Workers and advocates say Ontario's forced shutdown of their workplaces was done without consultation and applies an unequal standard to an already stigmatized industry.THE CANADIAN PRESS/Colin Perkel

TORONTO -- Strip club operators are voicing frustration over the Ontario government's move to shut down their establishments, saying the closure was ordered without consultation and treats the industry unfairly.

The province announced the shutdown late last week, saying it was needed to reduce transmission in high-risk businesses.

Mauro Mastrucci, who owns the Airport Strip Club in Mississauga, Ont., said clubs weren't warned about the order and argued the measure discriminates against the adult entertainment industry.

"It's totally frustrating," he said, noting that his club had followed public health guidelines, installed plexiglass barriers, required customers to wear masks, and checked patrons' temperature at the door.

Two Toronto strip clubs made headlines this summer after COVID-19 cases were linked to the establishments. But Mastrucci said restaurants and bars have also seen cases and have only had to close temporarily while his industry has to deal with a provincewide shutdown.

"How can they distinguish that it's more likely that strip clubs will be able to spread COVID-19 and bars and restaurants won't," he said.

Other strip clubs echoed that sentiment, including one in Barrie, Ont. In an online post, Crossovers shared news about crowds attending a recent car rally in Wasaga Beach, Ont., writing, "And yet strip clubs are the problem ..."

One Toronto woman who works as a dancer in several strip clubs in Ontario said the closure reflects negative stereotypes about their industry.

"Why are we the scapegoat of moral panic? This goes back to the idea that sex workers are vectors of disease," she said.

The woman, who also works with Work Safe Twerk Safe, an organization that offers advice and other supports for dancers, asked not to be identified for fear it could jeopardize her future employment opportunities.

"Strippers are being shamed in a way that other businesses are not," she said. "We don't think it's acceptable."

Maggie's Toronto has fundraised throughout the pandemic to support sex workers, and Ade Kur said governments should step up to support those losing income from the targeted closure.

The Ministry of Health said the closure is part of an attempt to address a rapid increase in community transmission of COVID-19.

It also said contract tracing logs kept by the clubs were "often incomplete."

Ade Kur said club workers could have proposed solutions on how to keep the establishments safe had they been consulted.

"These are some of the best people to consult around public health because their work is literally determined by their own health and safety," Ade Kur said.

This report by The Canadian Press was first published Sept. 29, 2020.