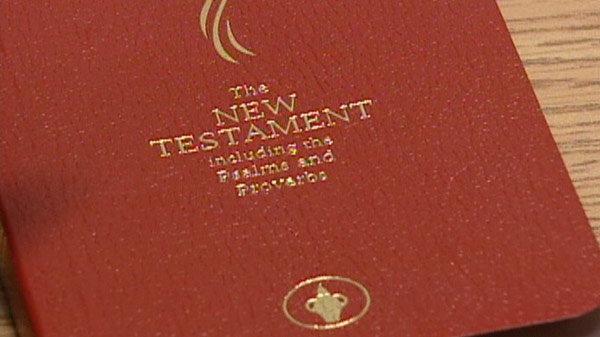 A Gideon Bible is seen in this undated image taken from video.

The 8-3 vote at the Bluewater District board barring distribution of any non-instructional religious materials ended months of fractious and emotionally charged debate over the ending of the decades-old practice.

The decision, which follows in the footsteps of several other public school boards in Canada, was made on legal advice that allowing the distribution could violate human-rights legislation.

Bill Donovan, of Owen Sound, Ont., a father with one child in the Bluewater system, opposed the distribution because it "undermines the secular nature" of public schools.

"I feel most pleased, though, that the decision derived from the law of the land, administered by an elected board, in a secular fashion," Donovan said.

"It bolsters my faith in the admirable society we have here in Ontario and Canada."

Vociferous opponents of the ban had accused trustees of betraying their Canadian and Christian heritage.

Several trustees received threats and hate mail, much of it anti-immigrant.

As a result, the board took security precautions for the evening vote, which went off without incident.

Before the vote, one speaker, Bevan Lougheed, told the board that he wished on behalf of the Christian community to "explicitly condemn" expressions of hate.

"We just want to be consulted before you change a practice important to our heritage," Lougheed said.

The local chapter of Gideons International in Canada and some church elders had previously distanced themselves from the more extreme views espoused by ban opponents.

Still, the invective unnerved members of the board, which has more than 18,000 students in 53 schools in Ontario's Bruce and Grey counties.

Trustees stressed the ban applies only to non-instructional religious materials.

"Bibles and other religious texts will continue to be available in our libraries."

Some parents have said they might take their children out of the public school system in light of the ban.

Gideons International in Canada, which has been offering the free Bible to Grade 5 students, said the organization would take a ban with "complete acceptance."

Johnstone rejected as out of order a proposed "compromise" amendment that would have sent the ban motion out for system-wide consultation before a final vote.

Another trustee, holding a Gideon Bible she once received, called it a sad day.

"The system was not broken," said Marilyn McComb, who spoke passionately against the ban. "We spent five months debating a problem that was not a problem."