Ontarians should put a mask on in all indoor public settings, the province’s top doctor advised on Monday.

Dr. Kieran Moore is “strongly recommending” masking in those spaces as some pediatric units in Ontario hospitals say they’ve been overwhelmed by an influx of sick patients in recent weeks.

At this point, the province has not issued a mandate on the use of masks across the province, although some health-care officials have asked for one.

Moore said the “difficult and complex fall” that was predicted has materialized as the province grapples with what he described as “three major viral threats”: COVID-19, influenza, and RSV (Respiratory Syncytial Virus).

“All three are actively circulating across Ontario in all of our communities and across the western hemisphere contributing to the pressures on our pediatric health-care system. As the risk to Ontarians increases, we must use all of the layers of protection that we have,” Moore said.

Asked why he was not introducing a mask mandate, Moore explained that, in the past, the requirement hasn’t worked in social settings and that today’s announcement was made in an effort to get Ontarians “back to the basics” of infection prevention. 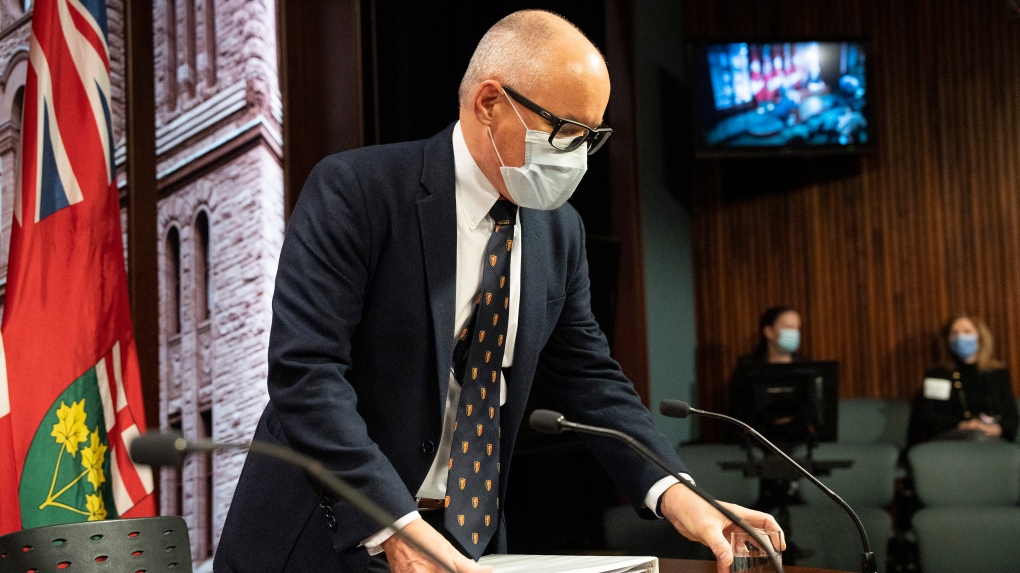 “This is different than COVID. This is protecting our children and those that are the youngest among us. Please parents, grandparents, siblings: If you have any respiratory symptoms, you must mask around those that are vulnerable."

He said that while mandatory masking may decrease the risk at a community level, the focus of Monday's recommendation is Ontario’s children.

Moreover, Moore explained that if the pressure on the province's health-care system does continue to increase, a mask mandate would be "the furthest we'd have to go."

In an update published by the Ministry of Health dubbed “Managing Pediatric Respiratory Virus Season,” the province said the recommendation extends to schools and childcare settings due to the “additional risk of RSV and Influenza.”

The Ministry said that children between the ages of two and five should also mask up with supervision, if they tolerate masking, and can safely put it on and remove it when necessary.

Moore said while he has no jurisdiction over what schools put in place, the health ministry is actively discussing and reviewing mask mandates in those settings as a potential measure. In the meantime, he said that boards may want to consult with their local medical health officers for best practices on masking going forward.

His announcement comes a day after Premier Doug Ford urged members of the public to wear a mask, but stopped short of imposing a mandate.

On Friday, Toronto’s Hospital for Sick Children announced it was putting some surgical procedures on hold to “preserve critical care capacity” amid the recent rise in patient volumes.

Moore revealed that he spoke with SickKids Hospital CEO Ronald Cohn who said that half of the patients ventilated at the hospital’s intensive care unit have RSV and half have influenza.

In the past, Moore said he would recommend masking in certain indoor settings if hospitals began cancelling surgeries.

The update by the Ministry of Health goes on to say that it is prepared to expand provincewide pediatric capacity to 150 per cent occupancy to deal with the surge.

As well, the ministry said it will request that patients over the age of 14 who require critical care be treated in an adult hospital.