TORONTO -- The chair of Ontario’s largest school board says there is concern over the provincial government’s decision to not reduce class sizes for elementary students when they return to school in September.

Toronto District School Board (TDSB) Ward 7 Trustee Robin Pilkey said that the decision to keep class sizes the same for Kindergarten to Grade 8 was not up to the board, but required under the province’s order.

Pilkey’s comments come as TDSB trustees meet on Tuesday to discuss the plan for the safe return of students to class in September.

The plan, titled “Returning to School: A Guide to the Safe Reopening of the TDSB,” is being presented to the trustees to make edits and recommendations, but will ultimately need the approval from the ministry of education to implement.

Last week, the province revealed its plan to reopen schools across Ontario, announcing that elementary school students and many high school students will return to the classroom full-time in September.

The government announced $309 million in new funding to assist in the reopening of schools with $60 million allocated for masks and personal protective equipment, $80 million for funding for additional staff, $25 million on cleaning supplies and $10 million for health and safety training.

However, while class sizes for secondary students in some school boards has been reduced to class cohorts of approximately 15 students, the class size for elementary students will continue at full capacity.

According to Pilkey, it would cost about $250 million to hire more teachers and use additional space to reduce class sizes for elementary students. She said the province knows this but didn’t move on it.

Since then, all four of the province’s teacher unions have been critical of the strategy claiming that the plan could put children and their families at risk.

Additionally, a petition has been launched calling for a reduction to elementary class sizes and has already garnered more than 90,000 signatures.

The petition, launched on Saturday by Toronto resident Kelly Iggers, alleges that the province’s strategy would put students at risk while allowing for the spread of COVID-19.

“The Ontario government’s ‘plan’ for reopening schools essentially amounts, in most elementary and middle school grades, to sending 30 students and a teacher back into a room for six hours/day with poor to no ventilation and probably only enough space for 30 centimetres of distancing between desks,” Iggers writes.

“This is shameful and demonstrates a reckless and disturbing lack of care for the health and safety of our children, teachers, school staff and communities.”

The petition makes reference to a report produced last week by The Hospital for Sick Children which says schools must prioritize reducing class sizes to keep kids safe.

“Smaller class sizes should be a priority strategy as it will aid in physical distancing and reduce potential spread from any index case,” the report reads.

Ontario Premier Doug Ford has long said that he will “not take any chances” when it comes to the safety of children in Ontario, but it is unclear if there are any plans to change the back-to-school plans amid the growing criticism.

Speaking at a news conference on Tuesday, Ford told parents that he shares their concerns but stands behind the province’s experts and the strategy for returning kids to the classroom. 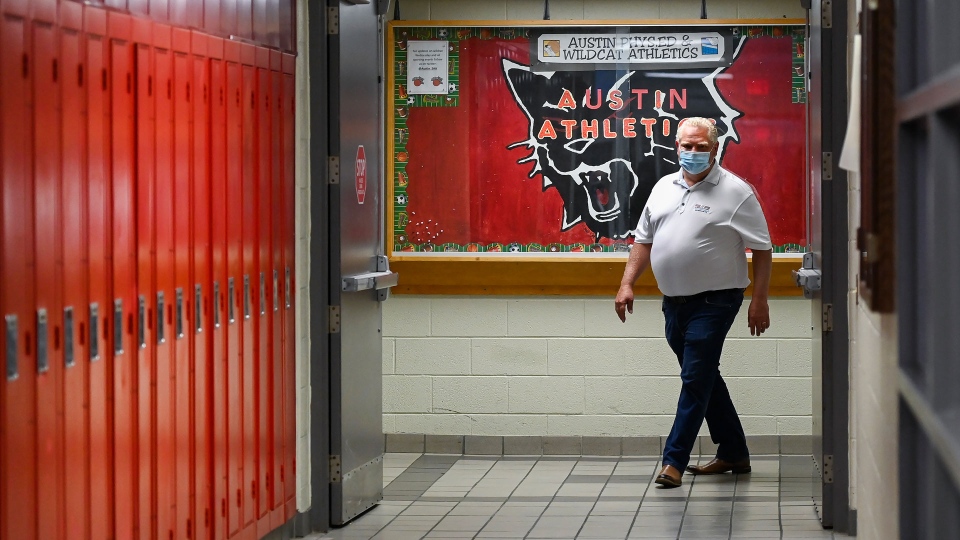 “They’ve come up with a plan, I respect their plan, they’re the experts, we aren’t the experts,” Ford said. “But for the parents that are nervous, I understand. I’m nervous as premier and I’ll be losing sleep all the way through September to make sure kids are safe."

Ford underscored that the decision to send children back to school will ultimately be left up to the parents.

Ontario's COVID-19 cases in schools, child-care centres as of Sept. 24