A new survey suggests Doug Ford is continuing to “endure low approval” in Ontario, making him one of the lowest ranking premiers in the country.

The Angus Reid survey, which was released Wednesday morning, suggests Ford’s approval rate sits around 34 per cent. This represents a seven point drop from September and an 11 point drop since the June election.

The online survey comes on the heels of a controversial few months of negotiations with education workers, something Angus Reid suggests could have impacted Ford’s standings.

“One-in-three approve of him after recent months filled with controversy and headlines,” the survey says.

In an effort to sway negotiations between the province and education support workers, the Progressive Conservative government used the notwithstanding clause to mandate a contract and make it illegal to strike.

The decision was followed by a two-day political protest and extensive criticism from opposition parties and unions.

The legislation was eventually rescinded as part of a deal with the union to come back to the table.

Angus Reid also suggests the government’s intention to appeal a court decision on Bill 124, which found the legislation infringed on rights to freedom of association and collective bargaining, could have played a part in the rankings. The bill capped wage increases for public sector workers at one per cent for a three-year period. 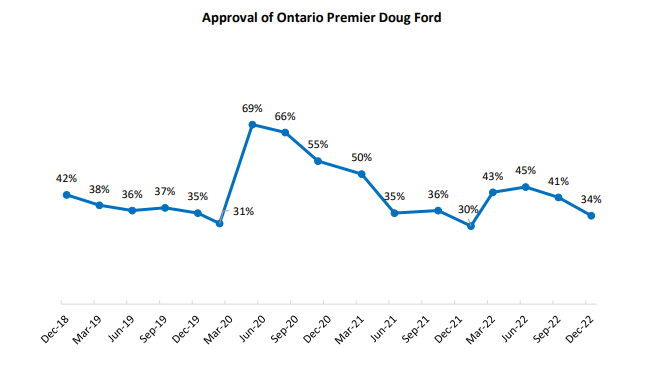 The only two premiers with lower approval ratings, according to Angus Reid, are New Brunswick Premier Blaine Higgs and Manitoba Premier Heather Stefanson.

The survey of 5,030 people, which was conducted between Nov. 28 and Dec. 3, carries a margin of error of +/1 one percentage points 19 times out of 20. Data on Prince Edward Island was not released due to a small sample size.

BREAKING | U.S. moving ahead on plan to down Chinese balloon over ocean

The Biden administration is moving forward with a plan to shoot down a large Chinese balloon suspected of conducting surveillance on the U.S. military, by bringing it down once it is above the Atlantic Ocean where the remnants could potentially be recovered, according to two U.S. officials.