TORONTO -- Ontario's daily COVID-19 case counts are expected to remain stable over the next month despite an increase in social contacts, newly released modelling shows, but only if public health measures are not lifted.

In the presentation, officials say that COVID-19 cases are declining in most public health units across Ontario as a result of vaccinations and continued public health measures.

The modelling suggests that even with "some increase in contacts between individuals," Ontario could see about 500 new COVID-19 cases a day in November. That number increases to a little over 600 daily infections with a "substantial increase in contacts."

Officials did not specify what a substantial increase in contacts means, but noted that even in that scenario, occupancy in Ontario's intensive care units would remain stable with fewer than 200 patients.

If Ontarians do not change their social behavior, do not increase their contacts and there is no change in public health measures, the daily COVID-19 case count could drop to about 200. 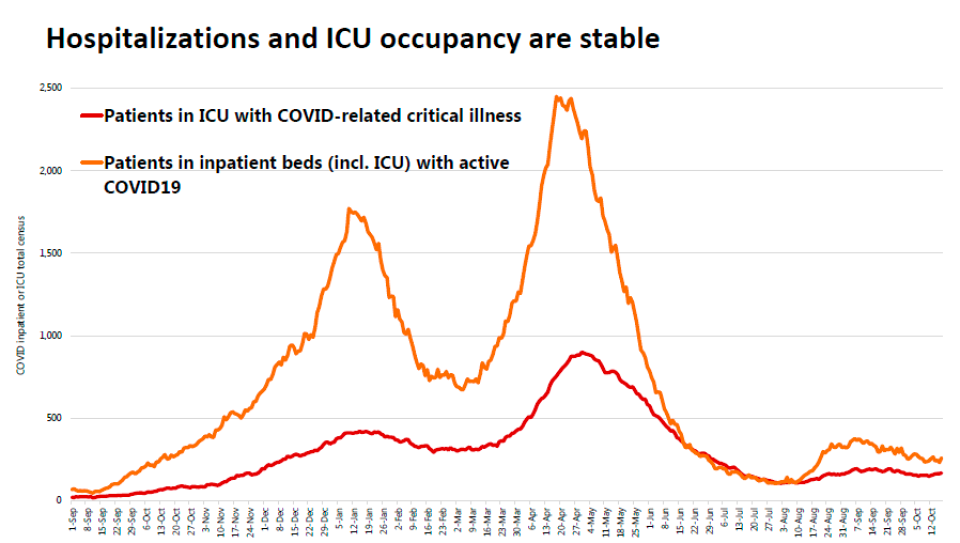 In general, director of the science table Peter Jüni said the modelling is "really, really great news" but warned the data could still fluctuate.

"The point is, you know since roughly the 23rd of July or so our mobility is stable and this is correlated with people's behavior with their contacts and during the same time what we saw is that 2.5 million people got fully vaccinated. This gives us quite a lot of protection," he told CP24 after the modellilng was released.

"But we continue to be in a wobbly balance and we need to be aware of that."

On Friday, Premier Doug Ford announced that the province would lift capacity limits in restaurants, fitness centres, casinos and a number of other non-essential indoor settings that require proof of vaccination starting Monday and outlined a plan for the loosening of further restrictions into 2022.

The province has already lifted capacity restrictions in select venues for large sporting events and concerts.

Jüni says the province won't know the true impact of easing that public health restriction for another week.

"We need these three-week gaps between steps that we're doing to understand what the impact is."

The last time officials presented COVID-19 modelling data was in early September, when they said the province was facing a "substantial" fourth wave that could see October's daily case counts reach 9,000 in the worst-case scenario.

WHAT'S NEXT FOR ONTARIO'S VACCINATION PLAN?

Currently, only people aged 12 and up are eligible to receive the COVID-19 vaccine, but with news that Pfizer-BioNTech has asked Health Canada to review doses for children aged five to 11 years old, public health units are starting to develop their own campaigns to encourage vaccination in that demographic.

The science table, for its part, suggests public health units adopt "smart, tailored strategies" to "set the course for a strong immunization program in children."

This includes hosting clinics at schools or other familiar locations for children, encouraging healthcare providers to engage with parents and kids, ensure reminders for second doses and create information campaigns within the community.

"Information is not enough and the source matters," the modelling suggests.

Officials also warn against a "one-size-fits-all" approach and to take special consideration for reaching racialized communities.