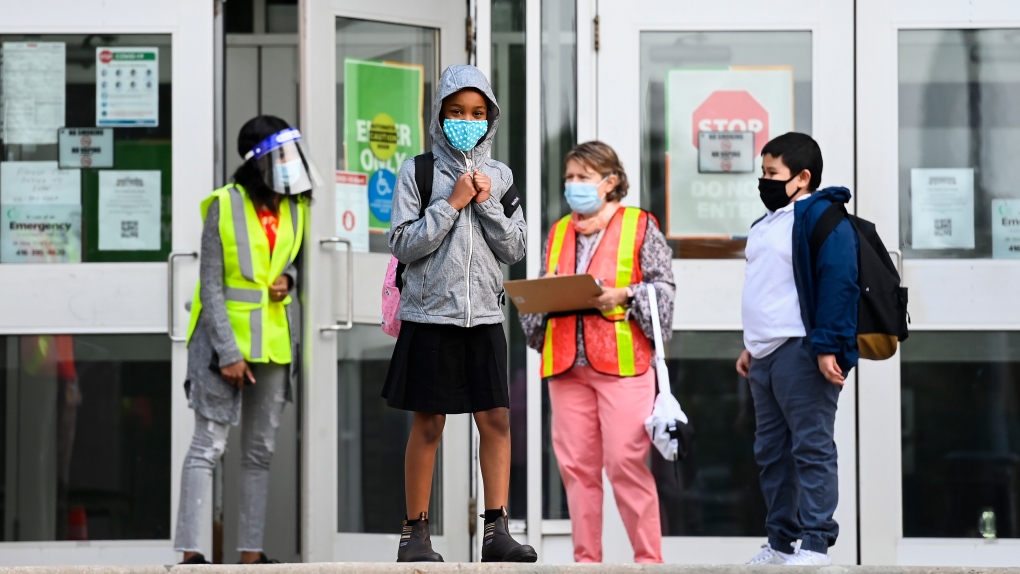 Children wait to enter at Portage Trail Community School which is part of the Toronto District School Board (TDSB) during the COVID-19 pandemic in Toronto on Tuesday, September 15, 2020. THE CANADIAN PRESS/Nathan Denette

TORONTO -- Ontario’s second round of asymptomatic testing in schools has found a low number of COVID-19 cases in classrooms across the province.

Officials reported that of the 3,702 tests conducted in five regions, including in major COVID-19 hotspots like Toronto and Peel, 32 cases were found, yielding a positivity rate of 0.86 per cent.

Ontario Education Minister Stephen Lecce welcomed the news on Monday, saying that the government will continue to keep schools “safe and open.”

"I think the early results indicate that both parents are working hard to reduce congregation of children after school and on weekends, and secondly that the school protocols, those infection prevention measures we put in place according to the chief medical officer of health, are helping to keep our schools safe and by doing so will keep them open," Lecce told CTV News Toronto.

Last December, when the province first began the testing pilot program, official logged 57 cases after 3,600 tests were completed in hot spot regions. More than 19 of those cases were found in one Toronto school.

This time, during the second round of asymptomatic testing, between Feb. 11 and 13, at least 11 of the 917 people tested across 40 schools in Toronto had COVID-19.

The province says that while most of the people tested in the second round of the program were asymptomatic, officials did also offer tests to some symptomatic students and staff, as well as members of their households.

The province said it plans to release the data on asymptomatic testing on a weekly basis. The Ontario Ministry of Education said it wants all school boards to conduct testing in at least five per cent of schools in their jurisdiction every week.

“Our government has taken action to deploy asymptomatic testing province-wide, the first program of its kind in Canada,” Lecce said on Monday. “I encourage all students, staff and families to take advantage of this program – which uses the least invasive testing options possible.”

Health experts and teachers had been urging the government to expand the asymptomatic testing program as more students returned to school last week amid concerns around the spread of new COVID-19 variants.

Dr. Anna Banerji with Temerty Faculty of Medicine at the University of Toronto said that unless all schools are testing it will not help with managing the spread of COVID-19.

"It makes us look like we're doing something when we're probably not doing it as much," she said.

"It's not very useful for infection control, for outbreak control, because you're testing one school but you're not testing another school. But it gives you an idea of how much COVID is out there - so you know that there's a bit of COVID asymptomatic kids in Toronto, none in Hamilton, none in these other regions. So that's reassuring, that a lot of these other regions don't have a lot of community spread of COVID, but it doesn't give you enough information really to control the outbreak."

Lecce added that the government hopes to scale up testing in schools, but did not provide any further details about what that may entail.

In schools across the province, according to the latest data, 55 more cases of COVID-19 were found. Forty-seven of those cases were students, and eight were staff members at the schools.

There are currently 278 schools with a reported case of the novel coronavirus across the province, 10 of which are closed.