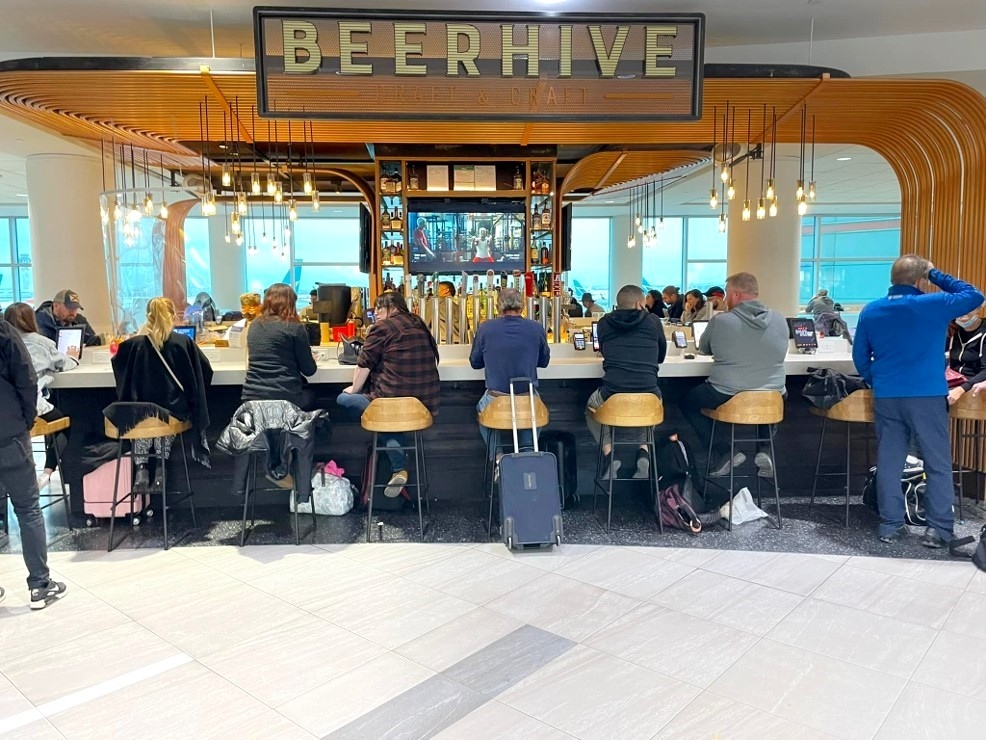 Beerhive, a restaurant inside Terminal 3 at Toronto Pearson International Airport, is seen in this photo taken on Jan. 24. (Adam Matthews)

The owner of an Ontario restaurant says he was "infuriated" when he saw more than 20 people eating at a bar in Toronto Pearson International Airport this week while indoor dining is banned for most of the province.

Adam Matthews, owner of 72 Bolton Sports Café in Bobcaygeon, Ont., said he was passing through the airport on Monday morning when he noticed people eating at Beerhive in Terminal 3.

He says he took a photo that shows more than 20 people sitting at the restaurant. Most people in the photo are not wearing a mask and there appears to be limited physical distancing and no plexiglass.

Restaurants in Ontario were ordered by the provincial government to close for indoor dining on Jan. 5 as COVID-19 cases hit record levels. Indoor dining will be allowed to resume on Jan. 31, with capacity limits in place.

During the closure, indoor dining at Toronto Pearson was never ordered to close.

"It's double standard," Matthews told CTV News Toronto. "It feels like anything the government controls, those businesses are wide open, while all us small businesses are at their mercy."

According to a spokesperson for the Greater Toronto Airport Authority (GTAA), indoor dining is permitted post-security at 50 per cent capacity, with parties of up to 10 people permitted to sit together.

The GTAA said indoor dining at airport restaurants is only open to same-day travellers, and therefore all people are fully vaccinated. They said when sitting down at a restaurant, passengers and employees are only permitted to remove their masks when they are in the act of consuming food or a beverage.

Matthews said it was a "slap in the face" to walk by the bar and see no plexiglass set up between guests, especially since he was forced to spend money to install it at his restaurant.

"You walk into these airport bars and there is nothing," he said. "There is no plexiglass up, you just sit down and eat. It’s absolutely infuriating."

The GTAA spokesperson said regular audits are preformed on food and beverages locations within the airport to ensure they are complying with public health guidelines.

"GTAA has been in contact with OTG regarding this photo," a spokesperson said.

OTG is the company that manages the operation of restaurants and bars in many North American airports, including Toronto Pearson.

CTV News Toronto reached out to OTG for a statement but has not received a response.

"All my colleagues, they're all hurting because of indoor dining restrictions," Matthews said. "And then you walk into the airport and it feels like they're doing whatever they want."

The white gunman accused of massacring 10 Black people at a Buffalo supermarket wrote as far back as November about staging a livestreamed attack on African Americans, practiced shooting from his car and travelled hours from his home in March to scout out the store, according to detailed diary entries he appears to have posted online.

A gunman motivated by hatred against Taiwan chained shut the doors of a California church and hid firebombs before shooting at a gathering of mostly elderly Taiwanese parishioners, killing a man who tackled him, authorities said.

Efforts were underway Tuesday to rescue the last of the defenders inside the Azovstal steel plant in the ruined city of Mariupol after Ukrainian officials said the fighters had 'completed their mission' and there was no way to free the plant by military means.

The Ukrainian government says Russia has shelled more than 1,000 schools, destroying 95. Intentionally attacking schools and other civilian infrastructure is a war crime. Experts say wide-scale wreckage can be used as evidence of Russian intent, and to refute claims that schools were simply collateral damage.

'Great for all of Alberta': Flames, Oilers prepare for battle in second round

Johnny Gaudreau and Matthew Tkachuk weren't even born the last time the Calgary Flames and Edmonton Oilers met in the Stanley Cup Playoffs, but they still understand how much the Battle of Alberta means to fans of both teams.

Elon Musk's ties to China through his role as electric car brand Tesla's biggest shareholder could add complexity to his bid to buy Twitter.