Diane Hill had just celebrated her seventh birthday when she first arrived at the Mohawk Institute Residential School in Brantford, Ont., in November, 1963.

"The first night there I was crying," said Hill, a retired Mohawk languages teacher at Six Nations of the Grand River.

She describes the institute as "hell on earth." When asked how long she was there, she replies, "too long."

"You can't imagine that in the human world: what we witnessed, what we smelled, what we saw, what we felt, what was committed against the children," said Hill. "Yes, we had tuberculosis go through. We had medical epidemics such as smallpox, various scarlet fevers, go through."

Hill sits on the board of directors of the Survivors' Secretariat, an organization dedicated to sharing the truth of what happened at the Mohawk Institute. She said she's heard from many people who had never heard of residential schools.

"Many, many people have said, `I didn't know, it wasn't in the history books.' It's very deep and dark, but the truth is coming out with the unmarked graves."

Hill said she typically does many interviews leading up to this day, recognized Tuesday nationwide as National Indigenous Peoples Day, which falls on the same day as the summer solstice.

"I am devoting my day to just attending events," she said. "I just want to go out and feel the unity of the people."

National Aboriginal Day, as it was known at the time, was first recognized in 1996 by the governor general at the time as a way to celebrate the culture and contributions of First Nations, Inuit and Metis peoples.

The day is seen in a new light by some this year as the first since Ontario earmarked funding for residential school burial site investigations. The Progressive Conservatives promised last November to double a $10-million investment they had designated for such searches.

"It's a start," said Hill. "The Mohawk Residential School, the `mush hole' it was commonly called -- the overgrowth since 1970 -- it needs to be environmentally, cautiously cleared."

Ontario has said it believes there are likely more unmarked burial sites in the province than the 12 identified by the Truth and Reconciliation Commission, which documented abuse suffered by Indigenous children at residential schools and the deaths of more than 4,000 children. 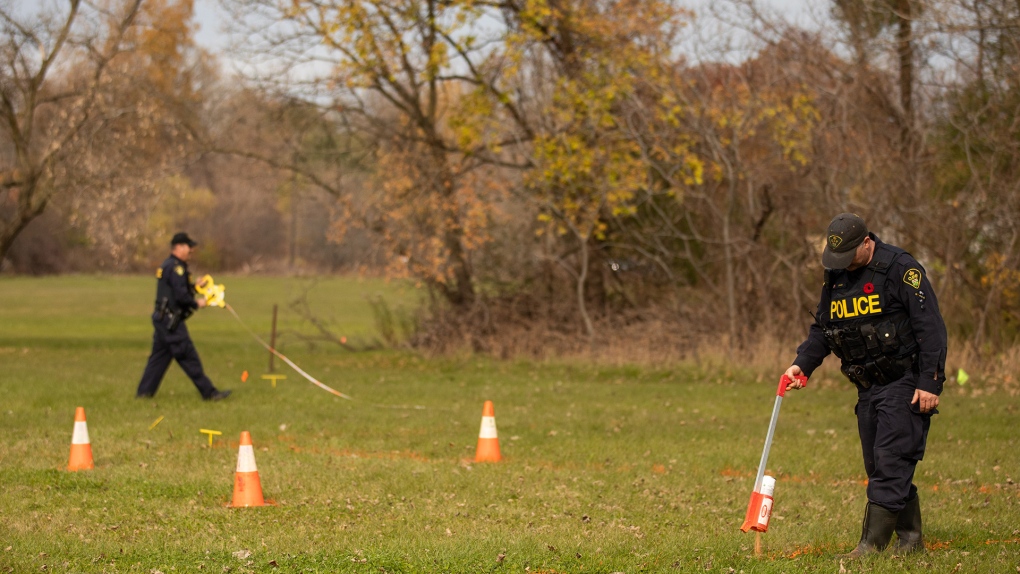 Ontario Provincial Police members take measurements during the search for unmarked graves using ground-penetrating radar on the 500 acres of the lands associated with the former Indian Residential School, the Mohawk Institute, in Brantford, Ont., Tuesday, November 9, 2021. THE CANADIAN PRESS/Nick Iwanyshyn

For Sherlene Bomberry, 66, of Six Nations, the day means coming together with friends and family.

"I'm going to be spending it in my community," said Bomberry. "We have free food, they have free rides, and they have music, and there's (information) booths happening. It's a gathering, a coming together."

Bomberry, who is also a survivor of the Mohawk Residential School, said the 215 unmarked graves found in May, 2021 at a former such facility in British Columbia really jolted her.

"The last 21 years I've been talking about (hearing) cries in the night, and everything like that, but I said it without emotion, you know what I mean? I was emotionally numb, until the 215, and then my body just let it go," said Bomberry.

She said attending the Brantford school made her very good at burying what she was feeling.

"When you were laying in bed there (at the school), you were repressing stuff, right? And I had already got the strap, the ruler, on my hand, so I didn't want to be saying anything," she said. "And not consoling my own sister, who was laying right underneath me in the bottom bunk."

Bomberry, who is an outreach worker at the Native Horizons Treatment Centre, said she is proud of herself for how far she's come in dealing with her trauma and growing as a person.

"You've got to get to all the core issues, it's just like peeling the onion off, the layers," said Bomberry.

This report by The Canadian Press was first published June 20, 2022.