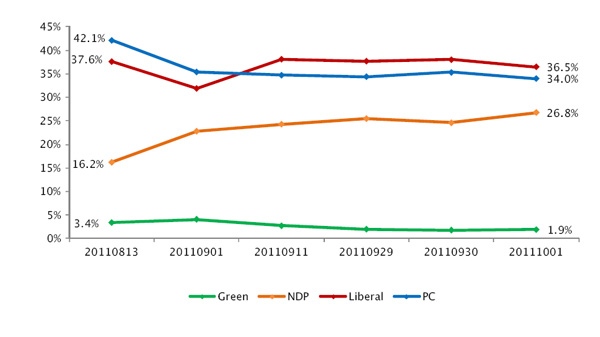 Question: For those parties you would consider voting for provincially, could

With less than four days to go before Ontario residents cast their ballots, the Liberals hold a slim lead over the Progressive Conservatives, according to a new poll released Sunday.

The Liberals are slightly ahead with 36.5 per cent support, compared with the Conservatives at 34 per cent and the NDP at 26.8, according to the Nanos Research poll for CTV, the Globe and Mail and CP24.

Between last Thursday and Saturday, Nanos conducted a random telephone survey of 900 Ontario residents of voting age and found 10.9 per cent of participants were undecided.

The poll numbers from the 788 decided voters reveal a race that is too close to call since the Liberal lead falls within the poll's margin of error of +/- 3.5 per cent, 19 times out of 20.

The same dead heat was reflected in the results gained when the pollsters asked the question: "Who, in your opinion, would make the best premier of Ontario?"

In an interview Sunday morning with co-host Kevin Newman on CTV's Question Period, Nanos Research president Nik Nanos said he thought it was "quite possible" that Horwath could trigger an NDP surge, just as the late Jack Layton did in May's federal election when winning big in Quebec carried the party to Opposition status.

"She did very well in the debate," Nanos said in an interview taped prior to the release of the latest poll. "The question is: Can she convert good will into the ballot box?"

"If we rewind back to Jack Layton, it didn't take organization in Quebec to deliver all those seats," he added. "People in Quebec basically said: ‘You know what? Let's vote NDP this time.'"

When pressed by Newman, Nanos admitted the NDP have shown "an incremental increase" in support over the last six weeks.

"But we haven't seen the dramatic spike we saw in Quebec for the New Democrats," he said.