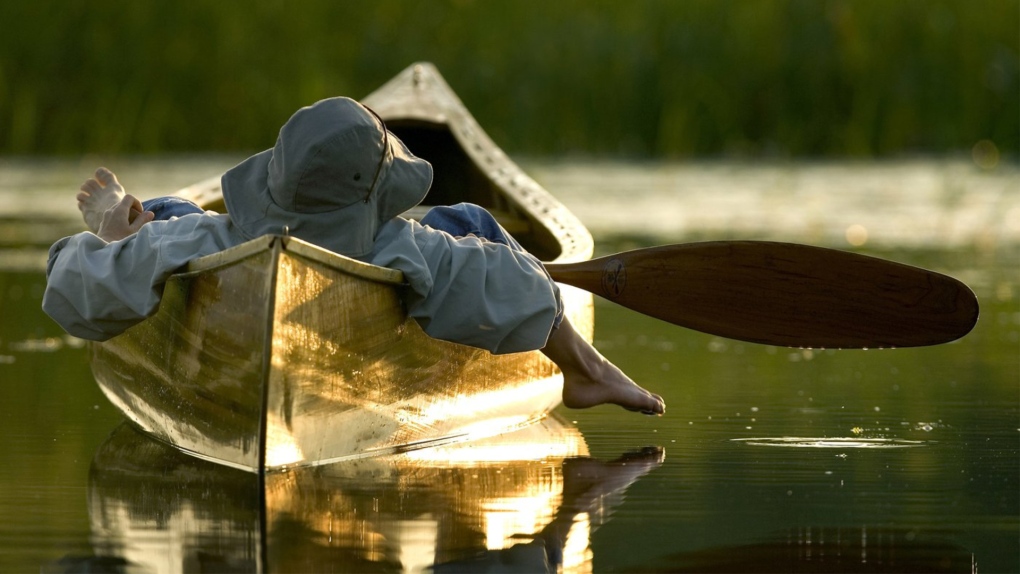 A paddler relaxes in a cedar strip canoe on wetlands in central Ontario near Lindsay, Ont. on June 26, 2022. Half of the wetlands in southern Ontario have never been considered for provincial protection, and new changes planned by the government as part of its housing plan could further put them at risk, the auditor general said in a recent report. THE CANADIAN PRESS/Fred Thornhill

Half of the wetlands in southern Ontario have never been considered for provincial protection, and new changes planned by the government as part of its housing plan could further put them at risk, the auditor general said in a recent report.

One of the audits as part of Bonnie Lysyk's annual report dealt with urban flooding, and in one section she highlighted an increasing loss of wetlands, as well as slowing progress in evaluating whether remaining wetlands are in need of protection.

“Many wetlands in or near urban areas in southern Ontario have never been evaluated, meaning that wetlands important for urban flood control are still vulnerable to being damaged or destroyed,” Lysyk wrote.

Wetlands are ecosystems that are permanently or seasonally saturated or covered with water and are important for flood control, carbon storage and wildlife habitats.

Since 1983, when Ontario's wetland evaluation system was established, about half of the wetlands in the southern portion of the province have been assessed to determine if they are in need of a provincial protection designation, the auditor found. Only 30 evaluations have been done in the past decade, and just one was completed in the past year, her report said.

The government is also planning changes to the wetland evaluation system, as indicated by a recent posting on the environmental registry that cites the need to build 1.5 million homes in 10 years.

That housing goal is also cited by the government in response to criticism over its plan to open parts of the protected Greenbelt lands for housing development, while adding more land elsewhere.

Environmental groups and the auditor general say the new Ontario Wetland Evaluation System would make it harder for wetlands to achieve protected status. Providing habitat for endangered or threatened species would be given less weight and provincial oversight would be removed, Lysyk wrote.

A spokesperson for the minister of natural resources and forestry said the proposed changes to the wetland evaluation system would remove duplication and streamline the evaluation process.

“Our government values the importance wetlands play in communities across the province,” Melissa Candelaria wrote in a statement on Tuesday. “The proposed update does not decrease current protections for species at risk or their habitat.”

She added that the government is providing $30 million to help conservation organizations create and restore wetlands in priority areas.

Advocacy group Ontario Nature said if the Ministry of Natural Resources is no longer involved in evaluating wetlands, developers could be the ones conducting those assessments and informing municipalities of the results.

“As a result, very few of Ontario's wetlands may benefit in the future from the protection that (provincially significant wetland) designation currently provides.”

The auditor general found “substantial delays” between a wetland's evaluation and approval by the Ministry of Natural Resources. She looked at two unnamed districts in particular and found an average delay of three years in one and 12 years in another.

He said that in addition to providing less protection for endangered species, the new system would stop considering wetlands as complexes.

“On a field somewhere there might be a small pond, and then maybe 25 metres of drier land with trees on it, another small pond - and these are evaluated in a group,” Gray said.

“The species that use them live in landscape, not just in the wet area. So you can imagine, something like a turtle, for example, may lay its eggs in the forested area on the sandy area, and then spend most of its time in the water, but if you ... get rid of all the upland sandy areas near the pond, that is not going to leave any place for the turtle to actually reproduce. So the wetland itself isn't much use.”

If the areas are not considered as a group, they would be less likely to reach the threshold of protected status, Gray said.

The government, in another environmental registry posting, is proposing to develop an “offset policy” for developments to require a net positive impact on wetlands, woodlands and other natural wildlife habitat.

Halton Region's conservation authority has raised concerns about the proposal, saying offsetting could negatively affect the ability of wetlands to reduce flooding.

“When we pave over wetlands, water has nowhere else to go except onto our streets and into our basements,” Schreiner said in a statement.

“It is far cheaper to protect existing wetlands than to pave over them and pay for the consequences.”

Between 2011 and 2015, the most recent data available, the annual rate of wetland loss was three times higher than in the previous data period of 2000 to 2011, Lysyk wrote in her report.

This report by The Canadian Press was first published Dec. 6, 2022

Canada has sent one of its military planes to Haiti to help the country cope with escalating violence.

Pop superstars Bryan Adams, Michael Buble and Drake could emerge Grammy Awards winners today, but it's the Canadian hitmakers behind the scenes who are chasing some of the top prizes.