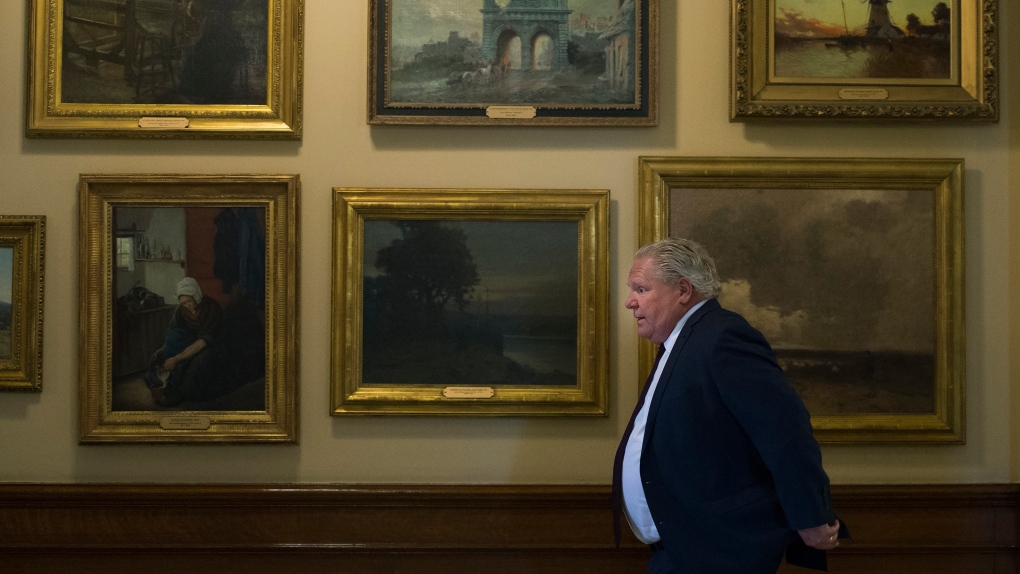 Ontario Premier Doug Ford arrives during his daily updates regarding COVID-19 at Queen's Park in Toronto on Tuesday, June 9, 2020. THE CANADIAN PRESS/Nathan Denette

TORONTO -- TORONTO -- Premier Doug Ford said he won't release a list of medical experts guiding his pandemic response because of privacy concerns, as opposition legislators called on the government to release a full roster of its health advisers.

Ford defended those advisers Tuesday during his daily COVID-19 media briefing after questions were raised about which epidemiologists and scientists are giving him advice on the province's reopening.

The premier said outside of the health experts on his pandemic command table, he has received advice from more than 100 doctors.

But he declined to name them.

"A lot of doctors, personally, don't want their names out there," Ford said. "There's a host of different doctors."

Since the start of the pandemic, Ford has repeatedly said he has based his decisions on the advice of medical and scientific experts and vowed to be transparent about information sharing with the public.

"Everyone's trying, absolutely everyone," he said. "We have a host of doctors, and then those doctors talk to other doctors. ... but to say every single doctor involved, I'd give you a list of over 100 doctors and for certain privacy, they don't want their names out there."

A spokeswoman for Health Minister Christine Elliott did, however, release a list of medical professionals advising the Progressive Conservative government.

The province's chief coroner Dr. Dirk Huyer, Dr. Steini Brown of University of Toronto's Dalla Lana School of Public Health, and a number of high-ranking civil servants who are health system managers or hospital CEOs are also on that list.

"All of these experts play important roles as we work collectively to respond to the COVID-19 outbreak and gradually reopen the economy," Hayley Chazan said in a statement.

Ford defended the civil servants who are advising him, including the head of the health bureaucracy his government created -- Ontario Health.

"About fighting COVID, it's not just about having doctors and specialists, that's a big part of it, but there's an operational side," he said. "If it wasn't Matt Anderson, I'll tell you, the testing would be half of where it is right now."

The official opposition leader said the public should know which scientists and medical doctors are giving Ford advice on his crucial testing and reopening strategies.

"Ontarians deserve to know that the command table includes medical experts who are on the ground, working with patients and front-line health care workers, bringing first-hand knowledge back to Queen's Park," she said in a statement.

"At his podium Mr. Ford has said Ontarians deserve to know what he knows, but on the ground we see an ongoing lack of transparency."

Green party Leader Mike Schreiner said people should know which experts are advising the premier, to ensure they're not "PC insiders or bureaucrats whose priorities lay outside of public health."

"Ontario has some of the brightest minds on infectious disease, and yet our response has been one of the most uneven and chaotic in the country," he said in a statement. "As we prepare for a second wave of the virus, Ontarians deserve to know which medical experts are helping the Premier to call the shots."

"For Ontario to feel safe as we fight COVID-19, clear and reliable information must be shared," Del Duca said in a statement.

Last week, independent legislator Randy Hillier called on the government to make the COVID-19 command table and its deliberations public.

"As the premier has said, 'we all should know what he knows'," he said. "Well, let's put our money where our mouth is and let us know what is going on at the COVID command table."

Colin Furness, an infection control epidemiologist at the University of Toronto, said more than releasing the names of experts advising the government, it would be helpful to see minutes of the command table meetings.

That way, the public can judge whether the advice of any health experts is actually being listened to by the Ford government.

"I get back to not just who's on the list, but who made this decision and who is standing behind the decision?" he said. "Can you get a scientist to stand up at the podium and say, 'I stand by this decision'?"

The province should not just have health system managers or physicians, but also epidemiologist, public health workers, social workers and scientists on the command table, he added.

"There's a whole wide range of expertise and I think rather than using the word doctor, we should be using those categories," Furness said.