Ontario Premier Doug Ford is seen in this photo taken during a press conference at Queen's Park. (The Canadian Press)

TORONTO -- Ontario Premier Doug Ford chastised Friday those who attended an alleged indoor party at a Toronto nightclub last week, saying they're putting their loved ones at risk.

On Tuesday, Toronto police laid charges against Goldie, located near King and Portland streets in the Fashion District. In a news release, police alleged that the club hosted an indoor party with no distancing measures on the evening of June 26.

According to the police service, somewhere between 125 and 150 people were spotted inside the nightclub, which does not have a permit for outdoor service or an outdoor patio or seating area.

Police said the club was letting patrons in through the rear door.

The owner, manager and corporation are now facing a charge of failing to comply with an order made during a declared emergency, in contravention of Ontario’s Emergency Management and Civil Protection Act (EMCPA).

The Alcohol and Gaming Commission of Ontario said Friday that it is also moving to revoke Goldie’s liquor licence.

In a tweet, the commission said that it has imposed an “immediate suspension” of the club‘s liquor licence “following serious violations affecting the public’s safety” and that it has also served the establishment with a notice that it intends to revoke its liquor licence.

The province’s emergency orders currently prohibit clubs, restaurants and other venues from operating as usual in order to stop the spread of COVID-19.

According to AGCO rules, Goldie has 15 days to request a hearing with the Licence Appeal Tribunal if it intends to appeal the move to revoke its licence. 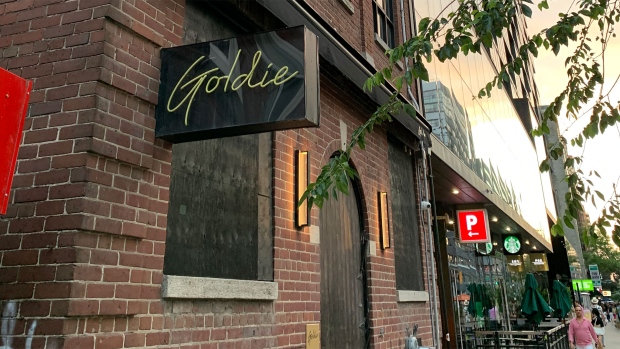 The club has not so far responded to requests for comment.

Ford implored people Friday to put up a little while longer with the disruption that the pandemic has caused.

“Why risk it? You’re smarter than that. What – to hang out with 150 of your pals? It’s not worth it. It just isn’t,” Ford said. “Just hang in there for a little bit longer. We’re doing such a great job.”

Provincial leaders and public health officials have urged the public to be cautious and vigilant as more businesses reopen. While Ontario’s daily case numbers have been declining, there are concerns that the province could see an uptick in cases as more spaces reopen, as has been the case in many other jurisdictions, particularly in the U.S.