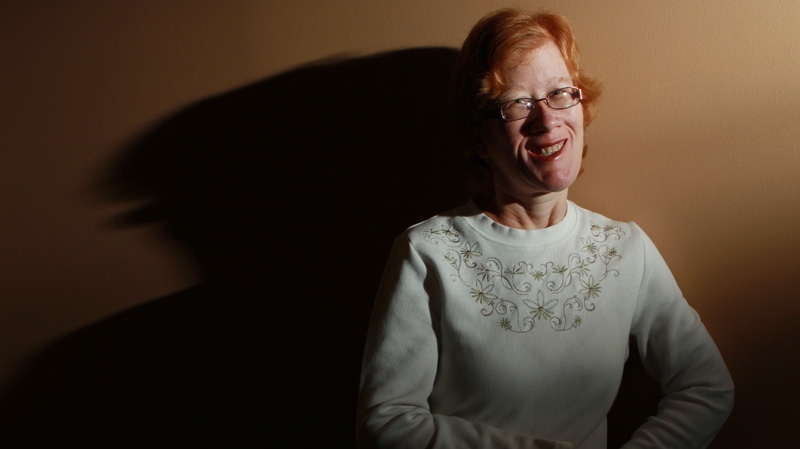 Lisette Lanthier poses for a photograph at Community Living Support and Services in Essex, Ontario. Lanthier is an advocate for the prevention of abuse for people with developmental disabilities. (THE CANADIAN PRESS / Dave Chidley)

When she faced abuse at school as a 16-year-old, Lisette Lanthier retreated into a shell.

Twenty-four years later, Lanthier is on a crusade to stop the mistreatment of people with developmental disabilities like herself, who are living on their own or in care.

"I wanted to help others to speak up and be able to feel comfortable to stop the abuse, from being hurt," said Lanthier, who leads New Day, a group that trains and educates staff at care homes and others about how to prevent abuse.

While regulations have changed, there are still hundreds of reports of alleged abuse or mistreatment from agencies in Ontario that serve 60,000 people with developmental disabilities.

A lot of them are speaking up about abuse, said Lanthier, who lives in Amherstburg, Ont. Some of them revealed what happened to them at New Day meetings after others shared their stories of abuse.

But records reporting abuse or mistreatment of people with intellectual disabilities over a one-year period in Ontario -- such as being left in vans for hours, scalded with hot water and sexual abuse -- are a sign that there's more work to be done, Lanthier said.

"It shouldn't happen," she said after being told of the cases contained in serious incident occurrence reports obtained by The Canadian Press.

After the incident at school when she was 16, Lanthier was traumatized.

"I kind of shut down for two months," she said. "I would come home from school, go to my room.

"And then finally my mom just said one day, 'We're all going to sit at the table as a family.' They more or less wanted me to be able to feel comfortable and move on. They didn't want me to have that shadow over me."

The province requires serious occurrences that might be criminal in nature to be sent to the police, but it leaves the investigation to individual agencies that it funds and regularly inspects.

In Ontario, for the period between Oct. 1, 2010, until Sept. 30, 2011, there were 488 serious incident occurrence reports alleging abuse or mistreatment of residents. Of those, 109 resulted in measures including policy changes, dismissals and criminal charges.

Among those cases were 14 reports describing residents mistreating other residents -- ranging from unwanted sexual advances to biting -- resulting in residents being moved or policies changed to protect them.

The documents also say that in 36 cases, staff were fired following alleged abuse or mistreatment and six staff were charged with criminal offences. There were four workers who resigned and 36 people were disciplined, with punishment ranging from suspensions to letters on personnel files.

To Lanthier, putting a letter in a personnel file isn't sufficient. "If you're going to do the abuse, then you shouldn't be allowed to work," she said.

Ontario defines abuse as "action or behaviour that causes or is likely to cause physical injury or psychological harm or both to a person with a developmental disability, or results or is likely to result in significant loss or destruction of their property, and includes neglect."

Among the reports were three cases of employees who were fired following investigations of sexual abuse.

One particularly troubling incident from the records provided in Ontario involved a staff member in Oshawa engaging in a sexual relationship with a person with disabilities -- taking them to hotels for alcohol and sex, according to the report.

The report says a Christian Horizons employee was having a sexual relationship with a resident, who reported that they'd met "on at least four occasions at hotel rooms in Oshawa and Courtice to drink alcohol and have sex."

"From our perspective, no staff member and the person that it supported could have a consensual relationship, because our definition of abuse is that there would be a position of power," she said. "That would be unacceptable to Christian Horizons."

But James Duncan, executive director of the Central West Specialized Development Services in Georgetown, says the reports on incidents of abuse are not always as clear cut as they appear, including one at a home operated by his agency.

On July 12, 2011, a consultant to the agency reported witnessing a staff member use his foot "to close a drawer while ... (name removed) ... had ... hand in drawer. The consultant believed the action was intentional."

The report says the staff person was "disciplined internally."

Duncan said both the police and the agency investigated the complaint, but he declined to discuss details or whether the employee still works for Central West Specialized Development Services.

Not every allegation of potential abuse or mistreatment "is necessarily an accurate indictment of the events," he said. "But it is a report of what was seen."

In this case, the report isn't accurate, Duncan said, declining to elaborate.

There were also three cases of people with intellectual disabilities being left in vehicles for periods of time by their caregivers, the reports say.

In one incident, the report says a man was left in a car for more than an hour in sub-zero temperatures in January 2011 after a caregiver became distracted by a conversation in a resource centre.

The employee was "very remorseful," the report says. The employer says its staff member was disciplined and offered corrective counselling.

In another case on June 10, 2011, two men with developmental disabilities were left alone in a van with their seatbelts on while their caregiver went to a strip bar in Kitchener, the reports say. Community Living Stratford dismissed the worker, who was charged with failing to provide the necessities of life.

According to court documents, the worker signed a two-year peace bond on March 1, 2012, during which time he can't act in any capacity as a caregiver or support person for anyone with mental, physical or developmental disabilities, except for his daughter.

Trevor McGregor, executive director of Community Living Stratford, said he wouldn't describe it as a case of abuse, but a caregiver who exercised poor judgment.

"He decided to take advantage for his own personal reasons, but wasn't making a decision to be abusive to the people he was providing supports to," McGregor said.

The Ministry of Community and Social Services said new regulations came into force in 2011 that require agencies to immediately report any alleged, suspected or witnessed abuse that may be a criminal offence to the police. They must also file a report to the ministry within three hours, co-operate with police and follow up with the ministry afterwards.