TORONTO - A family from Everton, Ont., northeast of Guelph, fears that a popular brand of children’s shoes, that light up as you walk in them, may have caused a fire in their house.

Abby Spielmacher said a fire in her home this past Sunday morning could have been tragic as she was hosting a children’s birthday party for her daughter at the time.

“One of the girls screamed out ‘fire, fire.’ I went to the mudroom where the shoes and backpacks were and saw three-foot flames," Spielmacher said.

She and her husband tried to smother the flames and threw the burning items outside. A pair of battery-powered light up shoes was in a backpack hanging on the wall and the family believes that one of the battery-operated light-up shoes caused the fire. 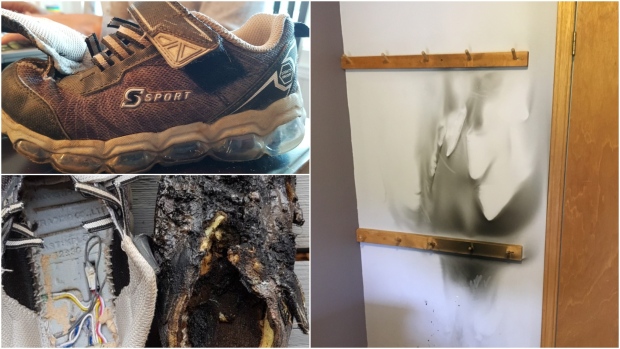 “It didn't come from the wall or the floor. When we looked through all the burnt items the only thing we could think of was the shoe," Spielmacher said.

Her five-year-old son Bryson said the S-Sport shoes from Skechers were one of his favourite pairs.

“When you step on them, they light up,” he said.

While the family believes the shoes are the likely source of the fire, they said they can't be sure without an investigation.

In May of 2016, a family in Texas said they believed light-up shoes caused a fire in their SUV.

Class action lawsuits have been filed in the U.S. alleging battery-operated shoes are responsible for fires and burns to children's feet. The lawsuits allege when the shoes get wet, the batteries can short circuit and cause a fire.

“We have absolutely no evidence or reason to believe that this style caused a fire, which is pure speculation at this time. Nonetheless, we will contact the owner of the shoes so that they can be returned and examined,” a Skechers spokesperson told CTV News Toronto.

The family wants to have the shoes investigated to make sure this doesn't happen to anyone else.

“Thank goodness it didn't happen during the night. We were fortunate to find the fire within minutes," Spielmacher said.