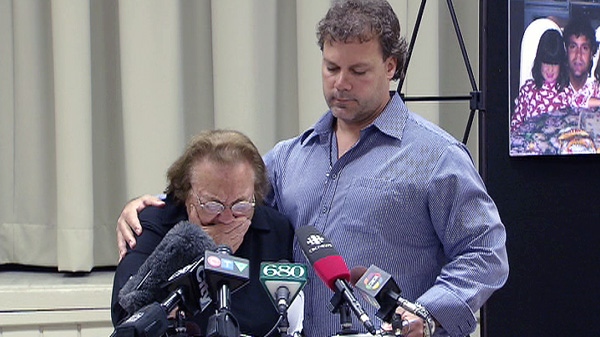 The family of murder victim Morris Conte appears at a press conference on June 13, 2011 to plea for information about the man's death.

Police have arrested a 27-year-old man in connection with the grisly discovery of a dismembered body in Ontario's Muskoka region last year.

Savario Lucia Jr., formerly of Bolton, Ont., was arrested on Tuesday and faces charges connected to the dismemberment of the body, parts of which have not yet been found.

Ontario Provincial Police announced the arrest on Wednesday, more than a year after the remains of 45-year-old Morris Conte were found spread across the Muskoka area.

Pedestrians found human remains in fields in Oro-Medonte Township and Lake of Bays Township on May 22, 2010. Six days later, more remains were found on the shoulder of a road outside Bracebridge, Ont.

Post-mortem examinations determined the remains were all from the same person, later identified as Conte.

Police have said that Conte was known to them, and that his murder may have been a message or warning to someone else. They say the body parts they've discovered weren't hidden, but left in plain sight and meant to be found.

"This investigation is still ongoing and we are confident that all those who are responsible for the murder and dismemberment will be brought to justice," OPP Det. Insp. Rene Bazinet said in a statement.

Members of Conte's family made a tearful appeal for justice in May, asking for anyone with information in his death to contact investigators.

"I think of Morris every day and I cry. I miss him. I miss him so much," mother Maria Conte told reporters at the time.

Parts of Conte's body are still missing, preventing his mother from giving him what she calls "a proper burial."

Lucia Jr. faces charges of accessory after the fact of murder and causing an indignity to a human body.

Lucia Jr. is scheduled to appear at a bail hearing in Orangeville, Ont., on Wednesday.