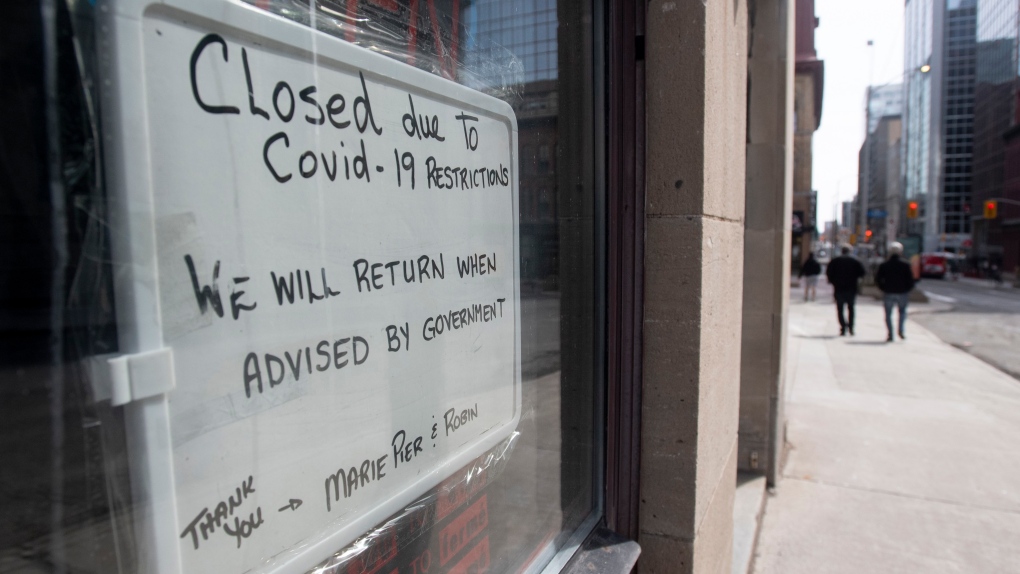 A sign in a barbershop window indicates the establishment is closed because of the COVID-19 virus in Ottawa, Wednesday, March 18, 2020. (THE CANADIAN PRESS / Adrian Wyld)

TORONTO -- Ontario is temporarily amending its labour laws to help businesses avoid permanently laying off workers and paying out severance, which could send some into bankruptcy during the pandemic.

The government is expected to announce today that it will amend the Employment Standards Act, which requires businesses to terminate employees who have been laid off for 13 weeks. The law then requires the business to pay severance to workers.

The change will see non-unionized workers who have had their hours reduced or eliminated placed on a temporary leave that preserves their job. Workers will still be eligible for federal emergency income support programs.

The amendment to the law will expire six weeks after the province's declared state of emergency ends.

"We've heard loud and clear from employers that they don't want to be forced to terminate their employees," Labour Minister Monte McNaughton said in a statement. "We have to step in to make sure workers have jobs to return to."

According to Statistics Canada, Ontario lost 689,200 jobs in April, bringing its employment down to the lowest level since 2009. The province's unemployment rate climbed to 11.3 per cent, the highest it has been since 1993.

Small and medium-sized businesses, and groups that advocate on their behalf, had been asking for the temporary change to the province's labour laws.

The Ontario Chamber of Commerce, Canadian Federation of Independent Business and Canadian Manufacturers and Exporters have all called for the measure.

They feared that once the terminations were triggered, the severance costs would put many businesses who were struggling to stay afloat during the pandemic, into bankruptcy.

The amendment will apply retroactively to March 1 and does not include unionized workers who are covered by collective agreements.

In March, Premier Doug Ford said people should not and will not have to worry about the security of their job if they have to quarantine or self-isolate, or if they have to stay home to look after kids or others because of COVID-19.

"The reality is we're facing some rough waters ahead but we will get through this together," Ford said at the time.

The province also announced legislation to ban employers from requiring sick notes for those in self-isolation or quarantine. It will also ensure protected leave for workers who have to take unpaid leave to isolate themselves or care for others, such as children not in school.

The government has said those measures will be retroactive to Jan. 25.

This report by The Canadian Press was first published June 1, 2020.