Health Minister Christine Elliott made the comments during a news conference on Monday when she was asked about the growing number of those seeking a test for the disease without displaying any symptoms.

“We certainly want everyone who is concerned about COVID-19 to be able to have the test,” Elliott said. “However, we are also looking at expanding the scope at our assessment centres.”

The comments come as reports of long lines for testing in the GTA show no signs of letting up.

On Thursday, a Mississauga resident told CP24 that she had waited in her car for six and a half hours before getting a test.

And on Saturday, the line outside of the assessment centre at Toronto Western Hospital could be seen winding around the facility as far as the eye could see with little to no movement.

At the same time, the number of new COVID-19 cases in Ontario has spiked to levels unseen since the beginning of June. Health officials reported 425 new infections of the novel coronavirus on Monday, the highest number since June 2 when 446 new cases were logged.

In light of this, Elliott said that the government is considering a number of options to ease the strain on the testing sites. 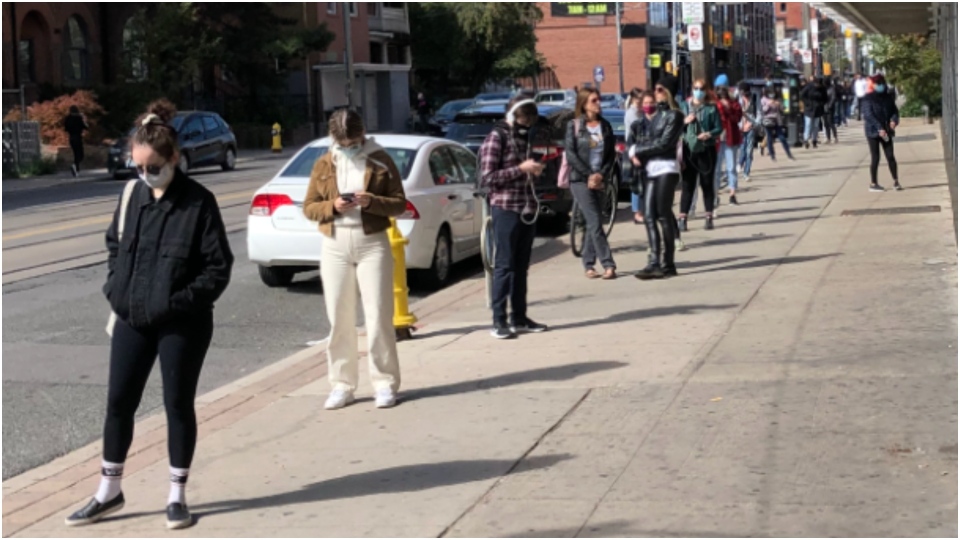 These include extending testing hours and setting up pop-up testing centres in areas with the longest lines.

Elliott then made reference to an announcement that has been long-teased by Ontario Premier Doug Ford regarding testing at pharmacies like Shoppers Drug Mart.

“That would probably be an appropriate place to send people who are asymptomatic and worried about their situation but not necessarily exhibiting symptoms,” she said.

However, no official announcement has been made on that front and residents are still awaiting the province’s highly-anticipated fall preparedness plan, which is expected to be unveiled this week.

In the meantime, Ontario’s top doctor is advising those who are not displaying symptoms of COVID-19 to potentially delay their visit to a centre in the interest of those who are.

"If you don't need to be seen urgently right away – if you're getting testing because it's something that you wanted to do, you're not a contact of a case, you're not doing it during an outbreak investigation, you don't have signs or symptoms of COVID-19 or from your COVID-19 Alert app, you may want to defer your visit until the lines decrease again,” Ontario’s Chief Medical Officer of Health Dr. David Williams told reporters on Thursday.

"Much like Christmas rush shopping, there are some that need to be there, some where it's good to be there and then there are also some there where it is not as urgent," he said.