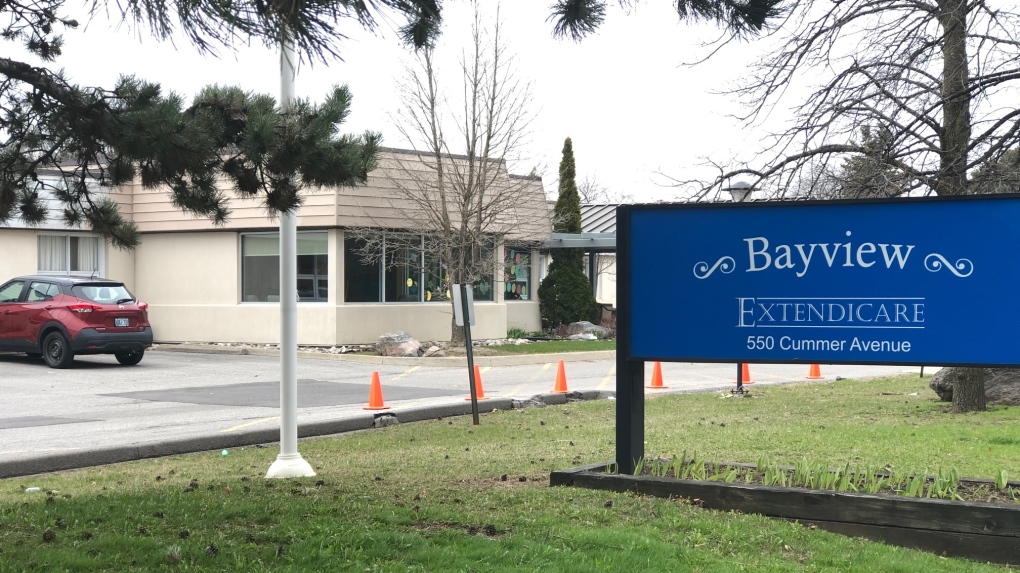 TORONTO -- As Ontario's long-term care homes race to prepare for a potential second wave of COVID-19, one operator is locked in a battle with an employees union that claims the company's novel coronavirus testing strategy could be violating privacy rights.

Extendicare, which owns 58 long-term care homes across Canada and provides management services to an additional 54 homes, launched a voluntary testing strategy in Ontario this month in an effort to better track and prevent the spread of the virus among nurses, personal support workers and facility staff.

Extendicare CEO Dr. Michael Guerriere tells CTV News Toronto the company decided on the approach after the success of the province's universal testing blitz in May, which saw all long-term care staff and residents swabbed for COVID-19.

"We found a whole bunch of people in that exercise who were asymptomatic, who were shedding the virus," Guerriere said.

"We caught it and avoided the outbreak involving the residents because we were able to isolate the staff before it transferred to any of the people in the home."

Guerriere said that led to the realization that constant and convenient testing of staff at their place of work was the "only real way to prevent future outbreaks."

After lobbying the Progressive Conservative government, Extendicare was given the green light by Ontario Health and Public Health Ontario to begin on-site testing for staff in early June.

Within weeks, Guerriere said 8,000 out of the 9,000 employees at Extendicare care and other facilities had already been given at least one test for the virus after volunteering to be swabbed at the workplace by a nurse practitioner.

"We deliver the test to the labs, and then the labs report back to us with the results. We share the results with the staff," Guerriere said, noting that anyone who tests positive is placed on a paid, 14-day at-home quarantine.

In order to participate, however, Extendicare requires employees to sign a consent form which gives the company the right to access the test results. The form states that Public Health Ontario will "share test results with Extendicare" which the company can in turn use to limit COVID-19's spread.

"Please be assured that appropriate processes and protocols are in place to ensure your personal health information is collected and stored in a secure manner," the consent form reads.

Sharleen Stewart, President of the Service Employees International Unions (SEIU), tells CTV News Toronto that while the union supports the testing effort "100 per cent" they have concerns about what kind of health information would be collected by the employees.

"When they get the results back, there could be information included about health history or health insurance numbers. And that, to us is a violation of privacy," Stewart said.

Stewart said the critical component of the test results - whether the person has tested positive or negative - is the employees right to know first, which can consequently be shared with Extendicare.

"It's still the employee's personal information, whether they're positive or negative, and they bring that information to the employer," Stewart said. "The employer does not have to get information directly from ... public health or anything"

The union has now filed a grievance against the long-term care company that could enter arbitration if the two sides don't come to a mutual agreement.

Extendicare says the only information they receive from Public Health Ontario is the employee's name and positive or negative test result.

"From our perspective [it] doesn't make a lot of sense because if anybody tests positive, who's an employee in a long term care home, public health tells us the result anyway," Guerriere said

"We're not asking for information that wouldn't come to us anyways, I think the what's different is that it comes to us directly from the labs."

Guerriere said the alternative -- having staff go to an assessment centre for a weekly test -- would create gaps in testing and could add delays at a time when speed of information could save lives.

As the two sides look for a resolution the voluntary testing continues at sites owned and managed by Extendicare and staff are testing positive, despite a lack of symptoms of the virus.

"it's pretty easy to see why this is valuable to everybody involved," Guerriere said.