Ontario Liberals pledge to remove HST from prepared food under $20 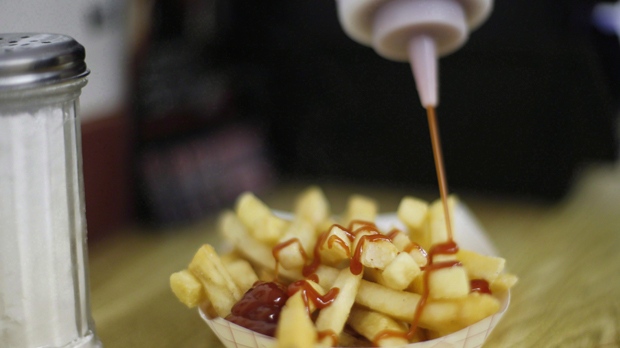 A customer enjoys a plate of french fries in this undated photograph. (THE CANADIAN PRESS/AP/Robert F. Bukaty)

The Ontario Liberals proposed Friday to remove the provincial portion of the HST from prepared food purchases under $20 and pay for it by increasing taxes on wealthy residents and highly profitable corporations.

Currently, the HST exemption for prepared foods maxes out at $4 and Liberal Leader Steven Del Duca said the proposed measure would save money for families adding items such as rotisserie chicken to their groceries or an office worker grabbing lunch from a local restaurant.

NDP Leader Andrea Horwath said the Liberals are the ones who put HST on prepared foods over $4 when they were previously in power.

"Now, he's trying to fix that by saying, 'Well, we're going to take the HST off prepared foods under $20 now,"' she said. "We can't trust the Liberals to do the right thing in the first place."

The Liberals say the move would cost about $500 million a year in foregone revenue.

They would add a one per cent surtax on companies operating in Ontario whose profits exceed $1 billion a year, which they say would generate about $150 million a year.

As well, they propose to implement a two per cent income tax increase on individuals earning incomes of more than $500,000 a year.

They say that would create a new tax bracket of 15.16 per cent on individual income above that threshold -- affecting 0.2 per cent of Ontarians -- and generate more than $350 million in annual revenue.

This report by The Canadian Press was first published April 29, 2022.