Liberal Leader Steven Del Duca, whose daughters will be returning to their publicly funded school this month, is set to launch an online platform for students, parents and educators to point out any issues inside schools and classrooms.

The website calls on users to “document what [they] are seeing on the front-lines” by either recording a two minute video or submitting an anonymous complaint on the Liberal party website.

“We can document what is really happening, good and bad … what’s working and what’s not, and where this school reopening needs more resources and support,” the website reads.

Del Duca says Premier Doug Ford has “dropp[ed] the ball” on the reopening plan and the website is aimed at providing the government with “the truth” about the return.

“We want to hear about how teachers, caretakers and support staff have stepped up to help make the transition back to school better because Doug Ford has been missing in action," Del Duca said in a statement.

On Monday, Premier Ford acknowledged that outbreaks in schools could occur as early as the first day and sought to reassure parents that classrooms would be closed in the event of widespread transmission.

"If it really starts taking off, I will not hesitate for a second to close schools down," Ford said at a news conference on Monday. "In the blink of an eye, they’re down, they’re done. Bang. Closed."

How the information is used

Users who access the Liberal whistleblower website are cautioned that their complaints “could be shared with the government” during Question Period in the Ontario Legislature and could be published on the Liberal party’s website and social media accounts.

Liberal insiders say while the party is genuinely looking to reveal and shore up any weak spots in Ontario schools, they acknowledge the information gathered could be used for future fundraising emails or calls from the party. 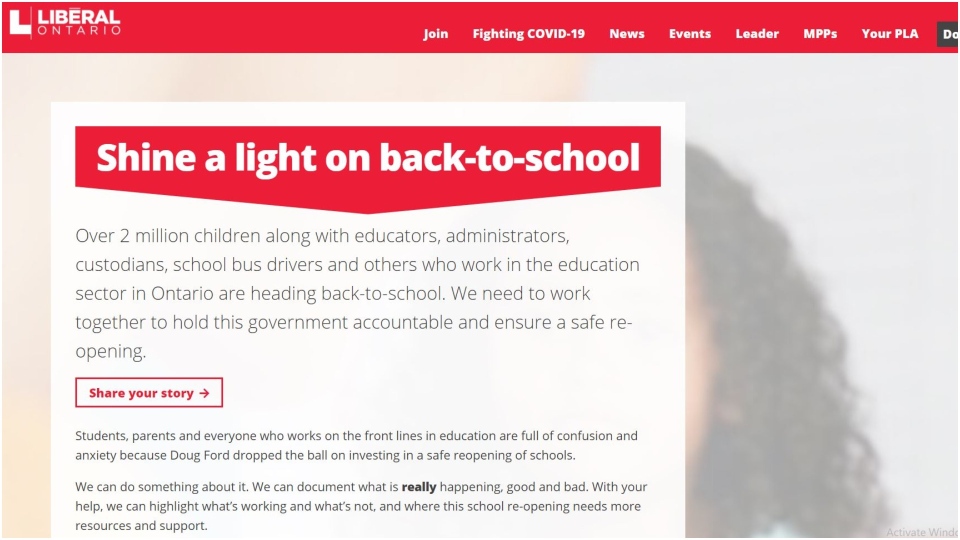 While whistleblowers are warned that they may “hear from the Ontario Liberal party from time to time,” insiders insist the party needs the information to follow up and verify the complaints before publicizing them.

The party plans to promote the website in parent groups on social media over the coming days.

A Liberal party spokesperson told CTVNews Toronto that submitted comments would be moderated to remove foul or threatening language, but everything else would be posted on the party’s website several times per day.