Politicians returned to Ontario's legislature on Monday and re-elected the Speaker, a day ahead of the government presenting a throne speech and a re-introduced budget.

The first order of business for returning legislators was to elect a Speaker, with the majority choosing Ted Arnott, a Progressive Conservative who served as Speaker for the previous four years.

"I was surprised at various points during the Speaker's election process by some of the things that I was hearing, both good and bad, from my perspective," Arnott said after being elected.

"But I also received a lot of feedback from members, which I found very helpful in terms of how I can do a better job if I get the chance to serve again, and I hope to put that knowledge into good use."

Arnott was not nominated as Speaker by his own party -- an NDP member put forth his name while a Tory member nominated Nina Tangri, who served as associate minister of small business and red tape reduction and would have become the first woman to serve as Speaker had she won. 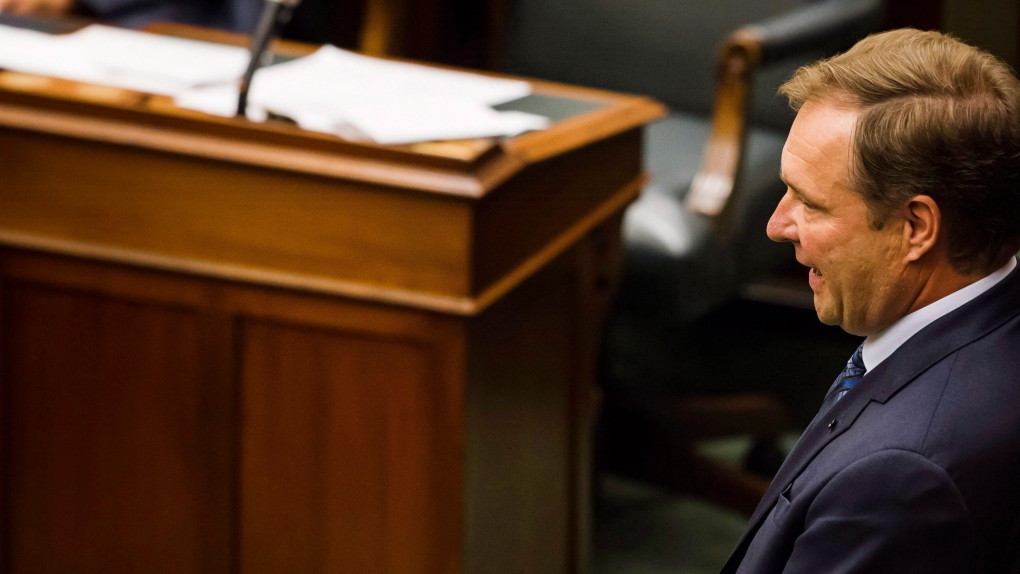 Ted Arnott addresses the house after being elected the new Speaker of the Ontario Legislative Assembly at Queen's Park, in Toronto on Wednesday, July 11, 2018. THE CANADIAN PRESS/Christopher Katsarov

"It's democracy and Ted was an excellent Speaker in the past and I'm sure he will continue to do so," Tangri said.

Outside the legislature on Monday, people representing various unions and labour groups protested Premier Doug Ford's government, calling on it to include more investments in public services, health care, higher wages and paid sick days in the upcoming budget.

On Tuesday, a throne speech will outline the Progressive Conservative government's agenda, followed by the budget, which is expected to be largely unchanged from when it was introduced but not passed in the spring before the election.

The only new item Ford has signalled will be in the budget is a five per cent increase to Ontario Disability Support Program rates, which have been frozen since 2018 at up to $1,169 a month for a single person for basic needs and shelter.

Green Party Leader Mike Schreiner said Ford needs to instead double rates, so people with disabilities don't have to live in "legislated poverty."

The Liberals and the Opposition NDP have also called on the government to increase those payments, and all three parties have also been calling for Ford to repeal wage restraint legislation as a way to ease a nursing staff shortage that has seen emergency rooms temporarily close across the province this summer.

Nursing groups and opposition politicians have been calling on the government to repeal Bill 124 -- passed in 2019 -- which capped wage increases for nurses and other public sector workers at one per cent a year for three years.

Schreiner said his priorities also include seeing an end to exclusionary zoning and investments in deeply affordable housing, as well as cancelling highway projects such as Ford's signature pledge to build Highway 413 around the Greater Toronto Area.

It is not yet clear how long the legislature will sit -- for a short summer session or continue right through to the winter holiday break -- but one other piece of legislation that the government has indicated is coming is a so-called strong mayor bill.

Ford has said his government is aiming to have a system putting more power in the hands of the Toronto and Ottawa mayors before the municipal elections planned for October.