Access to air conditioning should be a 'vital service' for all Ontario tenants: OHRC

Access to air conditioning should be a 'vital service' for all Ontario tenants: OHRC

The Ontario Human Rights Commission (OHRC) is calling on the Doug Ford government to designate air conditioning as a vital service for tenants in the province.

In a release issued Friday, the OHRC called for the implementation of a maximum provincial temperature and the ability to access air conditioning for all tenants under Residential Tenancy Act (RTA) regulations.

“Extreme heat caused by climate change is killing people … and will continue to get worse,” the group said in their statement. “A human rights-based approach to air conditioning/cooling is required to make sure all Ontarians have accessible, adequate and safe housing.”

Current RTA regulations list heat as a vital service, requiring Ontario tenants to have access to heat services from Sept. 1 to June 15 every year.

While municipal regulations can require housing with central air conditioning systems, such as long-term care homes or other multi-unit housing, to maintain a maximum temperature of 26 C between June and September, there is nothing set out in the RTA requiring all Ontario tenants be permitted access to air conditioning during the summer months.

Access to cooling during extreme heat waves is a #humanrights issue. Read our statement on why a human rights-based approach to air conditioning is required to ensure accessible, adequate and safe housing for all Ontarians: https://t.co/9odJ0KRpRq 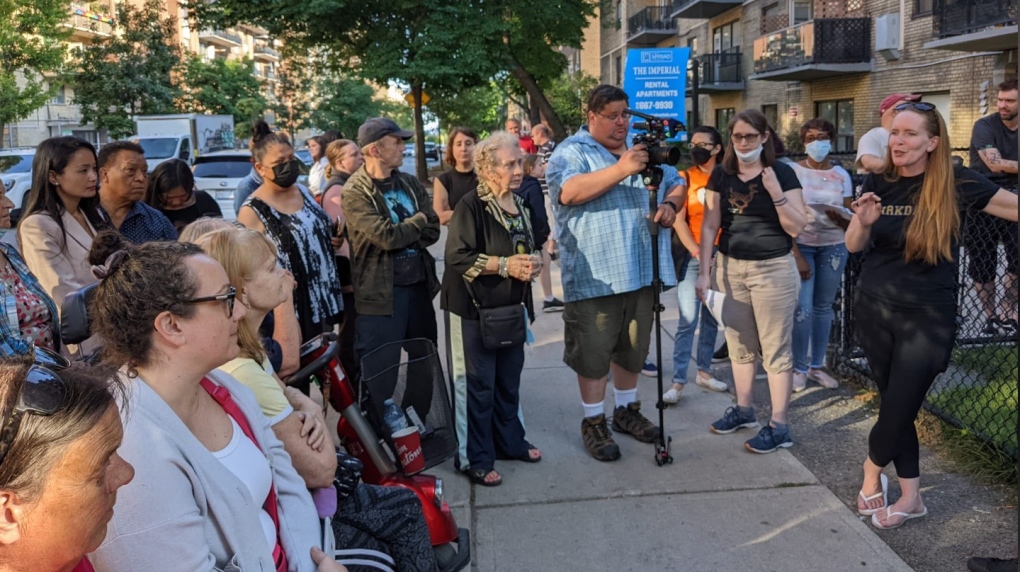 Dozens of tenants facing eviction for having an AC unit in their apartment gathered outside 130 Jameson Ave. on Tuesday, June 28. (Parkdale Organize/Twitter photo)

Approximately half a million residents in Toronto are living in condominiums or apartments without air conditioning, and recently some of those tenants have faced eviction for attempting to improve their conditions.

In June, tenants of a Parkdale apartment located at 130 Jameson Avenue were issued evictions notices for reportedly having air conditioning units in their apartments and refusing to pay extra to cover the costs of running them.

Speaking to CP24 in June, one of the tenants, Kiki Jones, said they'd been resorting to taking cold showers, avoiding physical activity, keeping the blinds shut and blasting electric fans in an effort to keep cool with air conditioning.

"Once you reach a certain heat point, it becomes really hard to take care of yourself," Jones said.

After tenants began installing their own air conditioning units, roughly 30 households in the building received N5 notices asking them to either vacate their apartments, pay a monthly fee to offset the higher hydro costs associated with running the units, or pay for hydro directly through sub-metering.

Parkdale Legal Clinic and MPP Bhutila Karpoche who represents High Park-Parkdale met with tenants and encouraged them not to move out and instead, to organize themselves as a group. Karpoche said she believes the eviction notices to have been issued in the hopes of raising rents once units are vacant.

As of August, tenants were still fighting the N5 notices.

Tenants at 130 Jameson received eviction notices for using their ACs.

In the hot summer months, especially during heat waves, this a serious health issue.

They are organizing to be able to keep using their ACs, especially since many neighbours are seniors and/or disabled. 🧵 pic.twitter.com/R9JTROgZlm

With files from The Canadian Press and CP24's Joanna Lavoie.

Ontario education workers vote 96.5 per cent in favour of strike

Ontario education workers such as custodians, early childhood educators and school administration staff have voted 96.5 per cent in favour of a strike, the Canadian Union of Public Employees announced Monday.

Quebecers are casting their votes Monday after a five-week election campaign. Incumbent premier Francois Legault's CAQ party has held a comfortable lead since the campaign began, but the battle for second has been tight between the four main opposition parties: Liberals, Quebec solidaire, Parti Quebecois and Conservative Party of Quebec.

More than 20,000 Nova Scotians still in the dark 10 days after Fiona, most schools reopen

Hurricane Orlene made landfall on Mexico's Pacific coast near the tourist town of Mazatlan on Monday. Orlene lost some strength after roaring over the Islas Maria, a former prison colony being developed as a tourist draw.