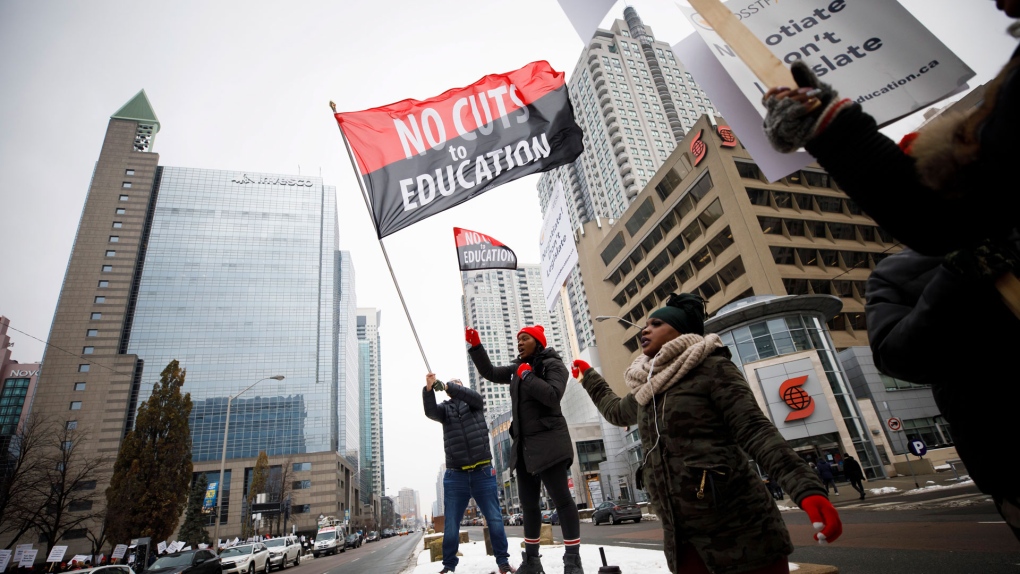 Striking teachers are seen picketing outside of the Toronto District School Board head office on Yonge Street in Toronto, Wednesday, Dec. 4, 2019. THE CANADIAN PRESS/Cole Burston

TORONTO -- High school teachers are off the job today at more than a dozen Ontario boards as part of their union's campaign of rotating one-day strikes.

The Ontario Secondary School Teachers' Federation says the 16 boards include those in Hamilton-Wentworth and Ottawa-Carleton.

The union representing the province's French-language teachers, meanwhile, is set to resume contract talks with the government today.

The new round of negotiations comes a day after the Ontario English Catholic Teachers' Association announced a provincewide walkout for March 5, citing unsuccessful bargaining talks earlier in the week.

All four of the province's major teachers' unions have been in contract talks with the provincial government since September.

Last week, they engaged in a province-wide strike that saw 200,000 workers off the job -- the first time since 1997 that educators from all the labour groups were on strike on the same day.

The union representing secondary teachers is concerned with the government's increases to class sizes and new mandatory e-learning requirements.

All of the teachers' unions are also asking for around two per cent in annual salary increases, but the Ontario government has passed legislation capping raises for public sector workers at one per cent for three years. The unions, along with other groups, are challenging that legislation in court, saying it infringes on collective bargaining rights.

Education Minister Stephen Lecce has said the two-per-cent raise the teachers are seeking is the biggest sticking point in current contract talks.

This report by The Canadian Press was first published Feb. 28, 2020.