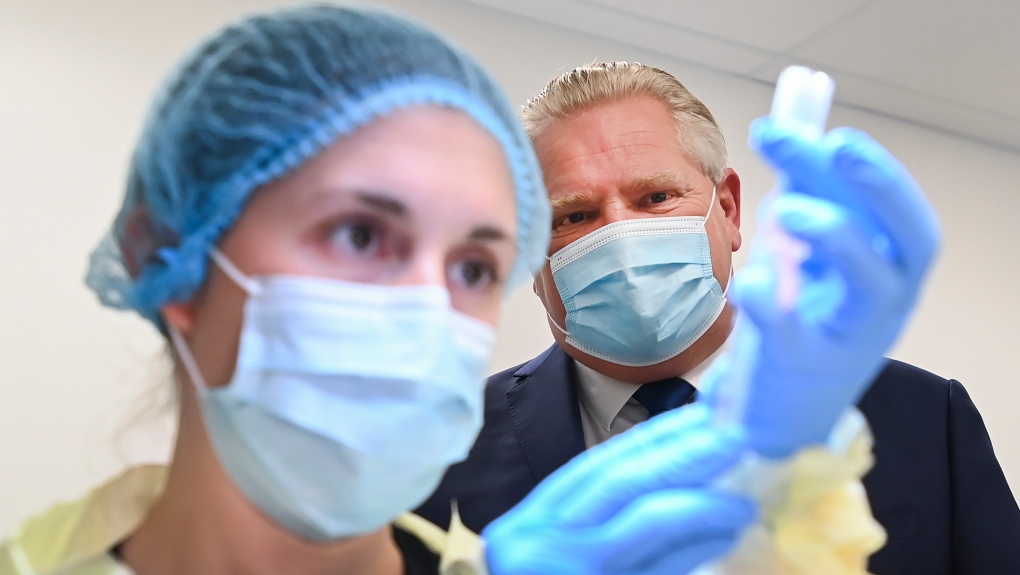 Ontario Premier Doug Ford watches a health-care worker prepare a dose of the Pfizer-BioNTech COVID-19 vaccine at a UHN vaccine clinic in Toronto on Thursday, January 7, 2021. THE CANADIAN PRESS/Nathan Denette

TORONTO -- As Canada prepares to receive thousands of doses of the newly-approved AstraZeneca COVID-19 vaccine, Ontario has yet to determine how the vaccine will be used, citing the need for guidance from a federal advisory committee.

The Canadian Press reported on Monday that the initial shipment from AstraZeneca could arrive as early as this week, putting pressure on the province to reveal how it plans to administer the highly portable vaccine.

A spokesperson for Health Minister Christine Elliott told CTV News Toronto the details of the vaccine roll out strategy are still being finalized, and the province is awaiting further guidance on the best use of the AstraZeneca vaccine.

"Further details on the distribution of this new vaccine will be released once we have received guidance from the National Advisory Committee on Immunization and more information from the federal government on Ontario’s allocations and delivery timelines," said Alexandra Hilkene, a spokesperson for Elliott.

Premier Doug Ford suggested last week that Ontario might follow in the footsteps of Germany and France and limit the use of the AstraZeneca doses for people under the age of 65.

The lack of an official strategy, however, has drawn criticism from the premier's political foes who say the government has demonstrated a "gross level of incompetence."

"The province was supposed to have a plan by December. It is now March. Instead of spending the past months blaming the federal government, Ford should have been coming up with a comprehensive vaccine rollout plan," said Green Party Leader Mike Schreiner.

Elliott's office says the plan is coming, but did not provide a date.

"We will be updating our vaccine rollout plan accordingly and will share those details when finalized."