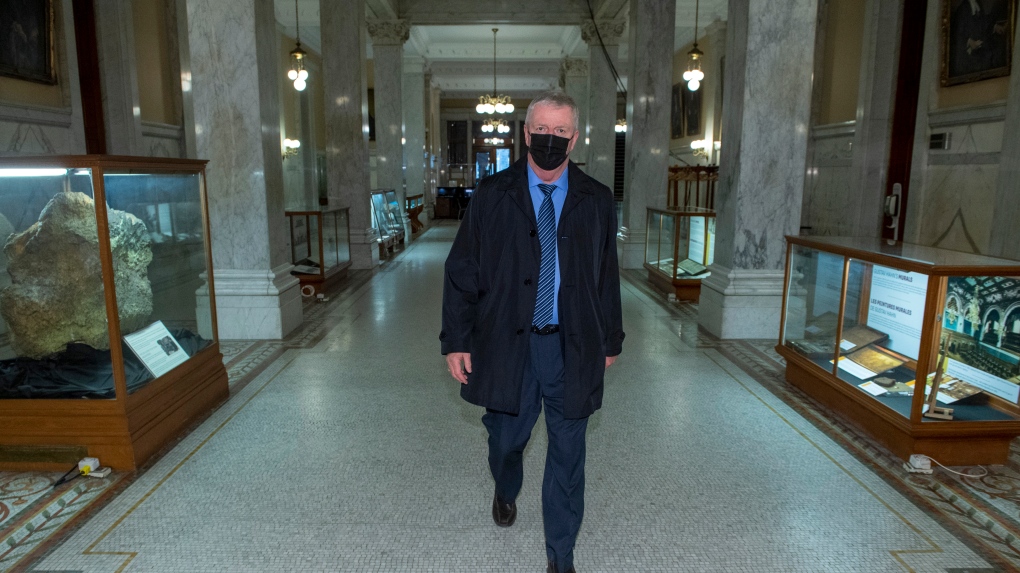 Former head of the Canadian Armed Forces Gen. Rick Hillier walks to the Premer's office at the Ontario Legislature in Toronto on Friday November 27, 2020. THE CANADIAN PRESS/Frank Gunn

TORONTO -- Officials planning for the rollout of COVID-19 vaccines in Ontario are now speaking directly with the manufacturers of seven different candidate vaccines as they prepare for what Health Minister Christine Elliott says will be “the largest logistical undertaking” the province has faced “in a generation.”

Several of the companies, including Pfizer and Moderna Inc., have already applied for emergency use authorization in the United States but they will need to have their vaccines approved by Health Canada before they can be distributed.

Prime Minister Justin Trudeau did say last week that the first doses of the vaccines would arrive in Canada in the first quarter of 2021 and that the majority of Canadians would likely be vaccinated against the novel coronavirus by next September.

But it remains unclear when the first Canadians in line to receive the vaccines will get to roll up their sleeves.

Speaking with reporters after touring a Brampton warehouse belonging to the pharmaceutical distribution company McKesson on Tuesday, Health Minister Christine Elliott said that efforts are nonetheless underway to make sure that Ontario will be in a position to distribute vaccines as of Dec. 31.

“As of yesterday we started speaking with vaccine manufacturers, including AstraZeneca, Pfizer, Johnson and Johnson, Jansen, Moderna, GSK and Sanofi. This is absolutely critical for planning,” she said. “We are also working with distribution experts like McKesson and Shoppers Drug Mart who not only have the warehouse capacity for vaccines like this but also know how to get these vaccines to their networks, including hospitals and other frontline care providers.”

Elliott has previously said that Ontario expects to receive a combined 2.4 million doses of the Pfizer and Moderna vaccines by March, which would be enough to vaccinate 1.2 million Ontarians.

The federal government, however, has not publicly confirmed that number.

On Tuesday, Elliott said that it is “critical” that the province has confirmation as soon as possible on when vaccines will begin arriving but she said that right now officials are willing to take “the Prime Minister at his word that we will have the vaccine very early in January.”

Meanwhile, she said that work is continuing under the direction of retired General Rick Hillier to ensure that Ontario will be able to quickly distribute the vaccine as soon as it starts arriving at warehouses.

“We know this is going to be the largest logistical undertaking that we have had in Ontario in a generation,” she said. “We have to get this vaccine to every corner of this province. It is no small feat and we know we cannot do it alone. We need the help of businesses and people with the necessary expertise in logistics, technology, patient care and pharmaceuticals.”

The federal Liberal government has signed deals with a total of seven different vaccine manufacturers and will be in line to eventually receive 414 million doses.

That said the country may ultimately trail behind the U.S. and the United Kingdom, which have both unveiled plans to begin vaccinating some citizens this month.

“We would all like the vaccine to be here tomorrow and to be 100 per cent effective and for everybody to have it the day after but we know that is not going to occur,” Hillier said on Tuesday, as he urged people to continue following public health advice in the interim. “People are tired and say ‘oh my goodness, we can’t carry on.’ Well guess what you can. This is not the first time in our history Canadians have faced incredible challenges and gotten through them.”