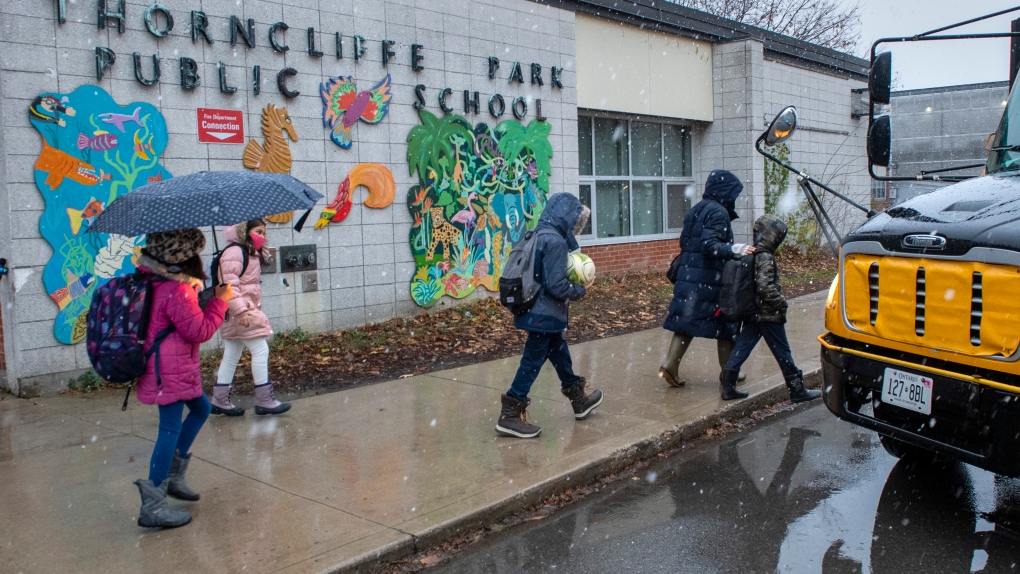 Students from another school board a bus outside Thorncliffe Park Public School in Toronto on Friday December 4, 2020. THE CANADIAN PRESS/Frank Gunn

TORONTO -- The plan to reopen schools in Ontario for in-person learning is based on the expectation that most of the students and staff will be fully vaccinated against COVID-19 by September.

But the province, school boards and five unions representing teachers and education workers say they don't know what the vaccination rate is among staff as they don't keep track of the data.

The Ministry of Education is expected to release soon its guidelines for the resumption of classes in September, but experts say plans based on immunization rates will be hard to develop without a full picture of vaccination coverage in schools.

Barry Pakes, a University of Toronto professor in public health, said the lack of data makes it difficult to assess which restrictions can be lifted or if vaccination policies should be considered.

"I'm not worried about whether schools are going to be safe or not," he said. "What I am worried about is whether they can be normal in the sense that we can let down some of our public health measures, if we know those schools are vaccinated enough."

Ontario's COVax system has partial data on the number of education workers who have received vaccines if they signed up under the priority group category. But a spokeswoman for the Ministry of Health acknowledged the tally doesn't include workers who signed up under different eligibility criteria.

Vaccine access for education workers was a priority issue for unions this spring, as the government mulled whether to again shutter schools for in-person learning to control the spread of the virus.

Now partway through the summer, unions representing teachers in Ontario elementary, secondary, Catholic and French schools told The Canadian Press that they don't have an overall sense of their members' vaccination status.

The Canadian Union of Public Employees, which represents a variety of education workers, said it does not have current data on COVID-19 vaccination rates. But the president of CUPE's Ontario School Board Council of Unions said it has shared a provincial survey on vaccination with its members, with results still pending.

"Overall, we'd like to see the removal of all barriers to ensure vaccination for everyone in schools," Laura Walton said in a statement.

The president of the Ontario Secondary School Teachers' Federation said the union is strongly encouraging members to be vaccinated but doesn't have a firm figure.

"We're considering that the numbers of our (vaccinated) members are hopefully similar to what the numbers are in the province," Karen Littlewood said in an interview. "It would be great if we had over 50 per cent of our members with their second shot but we don't really have anymeans or way to verify that."

As of Wednesday, 79 per cent of adults in Ontario had received one COVID-19 vaccine dose and 59 per cent had two shots.

Youth aged 12 to 17 have the lowest vaccination coverage of any age demographic, with 68 per cent having received their first dose and 25 per cent full vaccinated. No vaccines have been approved in Canada for children under 12.

The province has committed to offering two shots to all eligible students and staff before September.

A spokeswoman for Education Minister Stephen Lecce said the current vaccination rates give the government confidence that "the communities that our schools are within will be safer."

The province's chief medical officer of health said earlier this week that young people are a key target of the vaccination campaign, given their lower rate of immunization and the risk of increased disease spread in the fall when they congregate indoors for school and social activities.

The lack of vaccination data is "completely inexcusable," said Pakes, but representative of how Ontario approaches privacy and public health.

"The bottom line is we've just decided in Ontario in many, many areas to not create data systems and to prioritize privacy over safety," he said. "That's a legitimate way to approach things, but there are costs to that."

Ideally, Pakes said public health would be best-suited to manage vaccination data on school staff, but they don't have the legal authority to do that.

University of Toronto epidemiologist Colin Furness said data on immunization rates in schools would give families and workers peace of mind heading into the school year.

He suggested vaccines could be made mandatory still offering non-vaccinated workers the option to work remote jobs, which would address some of the privacy and workers' rights concerns wrapped up in the issue.

"I am a privacy proponent, but I put public safety ahead of that, especially when we're talking about vulnerable populations," Furness said.

However, he noted that vaccination data won't give a full picture of safety because some students will be living with unvaccinated people, meaning other precautions like masks, proper ventilation and small classes will be important in the fall.