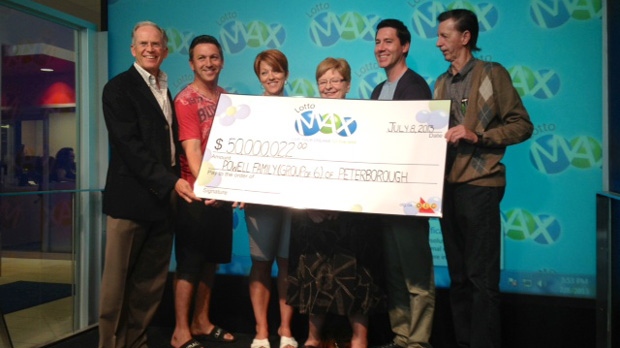 Peterborough resident Lynda Powell and her family pick up their winning on Monday, July 8, 2013. (CP24/Cristina Tenaglia)

TORONTO -- When Lynda Powell struggled to speak about her family's $50 million lottery win Monday, her husband and children joked she had lost her voice after hours of excited screaming and non-stop chatter ever since winning the July 5 Lotto Max jackpot.

The Peterborough, Ont., family -- made up of father John, mother Lynda and adult children Daniel, Gaylene, Michael and Sion -- gathered in Toronto to receive their giant cheque from Ontario Lottery and Gaming Corp.

Lynda Powell, who quit her job Monday as a dietary aide at a retirement home, was the first to find out about winning Friday's jackpot.

"I checked the ticket on the self-scanner after grocery shopping and was shocked to see all the zeros," she said in a statement handed out to reporters on account of her laryngitis.

She returned home to tell her husband, who needed to check the numbers himself.

Wearing pyjamas and slippers, John Powell went to the local corner store, in disbelief over the win.

News spread amongst the family, and on Saturday night they gathered to celebrate.

Sion Powell said upon seeing everyone's cars parked the driveway, he thought something was wrong or he had missed a birthday dinner.

"I approached the deck, everyone's yelling at me," he said, adding no one was able to reach him during the day. "A family of jokers, you don't really think it's true."

The winning ticket was closely guarded over the weekend by 66-year-old Lynda Powell, who took it to work, hiding it inside a sock and locking it away.

"She didn't want to leave it out of her sight," Sion Powell said.

The 38-year-old said his mother had played the lottery "religiously" for 25 years but for the last few years the family bought tickets together.

Though they have no firm plans on what to do with all the money, a family vacation to Wales -- where 71-year-old John Powell is originally from -- is in the works.

"We have some extended family, we're going to be a little bit gracious and look after some people," Sion Powell said.

He added that a four-door Land Rover and trips to visit friends in North America are on the top of his personal wish list.

"I need a new phone, nobody could message me that day," he said, with a laugh.

As for possible family squabbles over the money, Powell said the close-knit clan won't have a problem.

"I think we're grounded enough that it wouldn't have an effect on us," he said. "We're all equal winners."