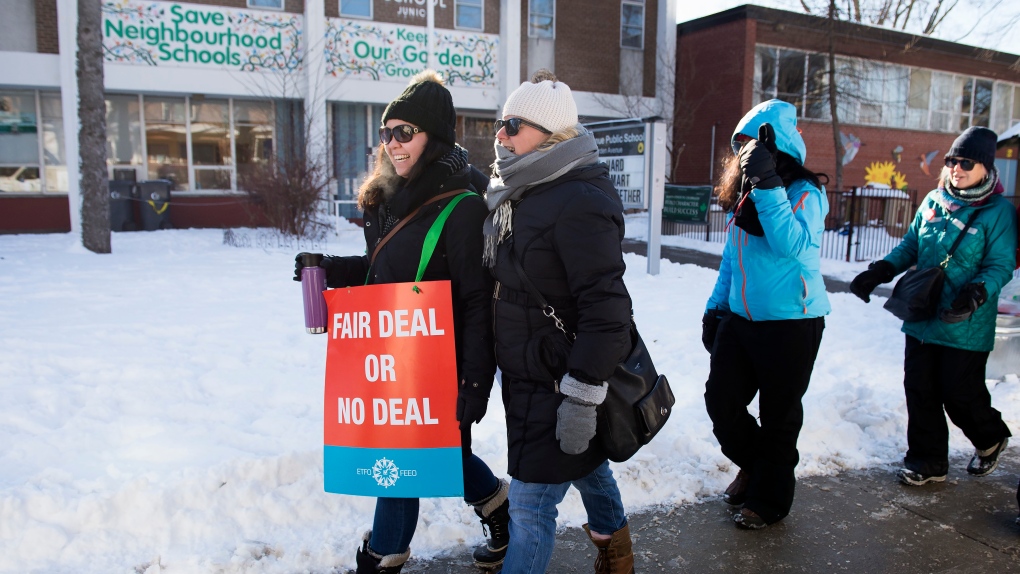 Teachers of the Elementary Teachers' Federation of Ontario participate in a full withdrawal of services strike in Toronto on Monday, January 20, 2020. THE CANADIAN PRESS/Nathan Denette

TORONTO -- Ontario's public elementary teachers will be carrying their rotating strikes into a second week.

A strike on Monday by the Elementary Teachers' Federation of Ontario will hit the Simcoe, Waterloo, Keewatin-Patricia and Penetanguishene Protestant Separate school boards.

On Wednesday, elementary teachers were on strike in the Thames Valley, Rainbow and Rainy River school boards.

MORE: Teacher strikes happening this week: Here's what you need to know

"Ask any ETFO educator and they will tell you that lack of supports for children with special needs, large class sizes and the violent incidents occurring in classrooms due to lack of supports for students with unique learning needs are the reasons they are willing to go on strike," Hammond said in a statement.

Education Minister Stephen Lecce has framed compensation as the sticking point in negotiations with all of the major teachers' unions, but Hammond said that has barely been discussed at the bargaining table.

Lecce said students deserve to be in class.

"Teacher union leaders broke their promise to not adversely impact student learning by withdrawing services for our kids, including EQAO math testing, extracurriculars, and report cards," he said in a statement.

All of Ontario's four major teachers' unions are engaging in some form of job action during a contentious round of contract talks, as key issues include larger class sizes and mandatory online courses.

This report by The Canadian Press was first published Jan. 22, 2020.